How to define a differential form on a fractal?

It is well known how to construct a Laplacian on a fractal using the Dirichlet forms (see e.g. the survey article by Strichartz). This implies, in particular, that a fractal can be "heated", i.e. one can write (and solve) the heat equation on the fractal.

The question is, can one run a fluid flow through a fractal set? In other words, is there a proper way to write the Navier-Stokes equations on a fractal? In order to do this, it seems that we need a "correct" notion of divergence at least.

More generally, is there a "correct" way to define a differential form on a fractal?

Take a look at Jenny Harrison, "Flux across nonsmooth boundaries and fractal Gauss/Green/Stokes' theorem," which should at least answer your question about a "correct" notion of flux and divergence for a fractal domain -- here's the abstract:

By replacing the parametrization of a domain with polyhedral approximations we give optimal extensions of theorems of Gauss, Green and Stokes'. Permitted domains of integration range from smooth submanifolds to structures that may not be locally Euclidean and have no tangent vectors defined anywhere. One may still calculate divergence and curl over a domain, and flux across its boundary which itself may have no normal vectors defined anywhere.

Here's an attempt at an answer to your more general question about differential forms on a fractal.

Suppose $K$ is a suitable fractal on which there is given a Dirichlet form, so we can single out an algebra $F$ of real-valued functions on $K$ of finite energy. There is a space of "universal" 1-forms $\Omega^1 F$ characterized by the following universal mapping property: there exists a derivation $d : F \rightarrow \Omega^1 F$ such that given any derivation $D : F \rightarrow E$ into an $F$-bimodule $E$ there exists a unique bimodule morphism $\phi_D : \Omega^1 F \rightarrow E$ so that $D = \phi_D\circ d$.

With this choice, we can take $\Omega^1 F$ to be the sub-$F$-bimodule of $F\otimes F$ generated by all elements of the form $f\text{ }dg$. More explicitly, $\Omega^1 F$ is the kernel of the multiplication map $F\otimes F \rightarrow F$ defined by $f\otimes g \mapsto fg$. It can be verified that this is the solution to the universal mapping problem posed above.

Now this does not solve the posed question. It only provides a starting framework. In particular, one must wonder whether, say, these universal one-forms admit finite integrals over paths inside $K$ with respect to some self-similar measure on $K$. As far as I know, a general approach here does not exist and one must look at the specific fractal in great detail.

Here, for instance, is a paper of four authors which works out the details in the case that $K$ is the two-dimensional Sierpinski gasket, the prototypical post-critically finite fractal. You can see there that the authors ultimately consider only certain quotients of the full space of universal $1$-forms. They also appeal, somewhat subtly, to some heavy-duty results which permit one to construct a derivation which acts, basically, as a differential square root of the Dirichlet form.

It should be noted that potentially one needn't be so abstract about this. One can also proceed recursively on successive graph approximations to the fractal--supposing such graphs exist and are suitably well-behaved--by considering more or less discrete de Rham cohomology on the approximating graphs. This is not unlike the simplicial cohomology of a simplicial complex, and perhaps there is a limiting procedure here not unlike that which prevails in Cech cohomology and which could produce the final de Rham cohomology of the fractal itself. Certainly it is possible to define a notion of $k$-form on the graph level and to, for instance, derive algorithms for the recursive construction of, say, harmonic $1$-forms on graphs, where "harmonic" is defined in reference to the Laplacian $d\delta + \delta d$, where $\delta$ is the codifferential, thereby mimicking classical Hodge theory. Moreover, the full classical Hodge decomposition would hold here, whereas only a partial Hodge decomposition is obtained in the paper above. Of course, one must find a way to transition to the limit.

Alexander Teplyaev has been working on exactly this question this is a paper in which he and Michael Hinz show that the Navier-Stokes equation on a Sierpinski gasket is sensibly defined and that it has a solution. There is a cluster of papers on this topic that they have written, all are available on arXiv.

The purpose of the noncommutative geometry of Alain Connes, is precisely to generalize the tools of differential geometry to "noncommutative manifolds".
These generalized tools are well suited to "irregular manifolds" like fractals (see his book p320).

This view of Connes for fractals has been highly developed in a thesis by Anthony Samuel here (2011).

There is an example of Hassler Whitney that is a lot of fun.

He constructs a curve $C$ (this is your fractal) in the plane... 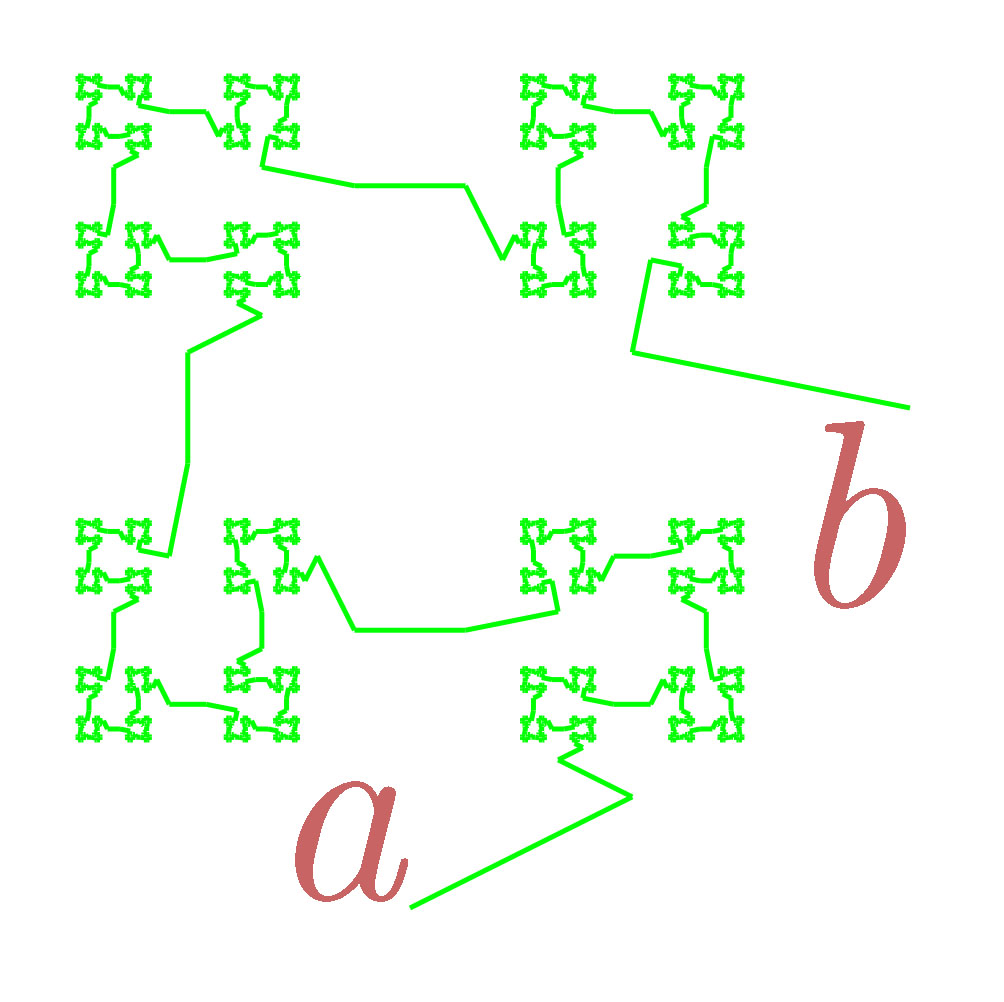 (Time-travelers may attend my lecture at the undergraduate math club...) 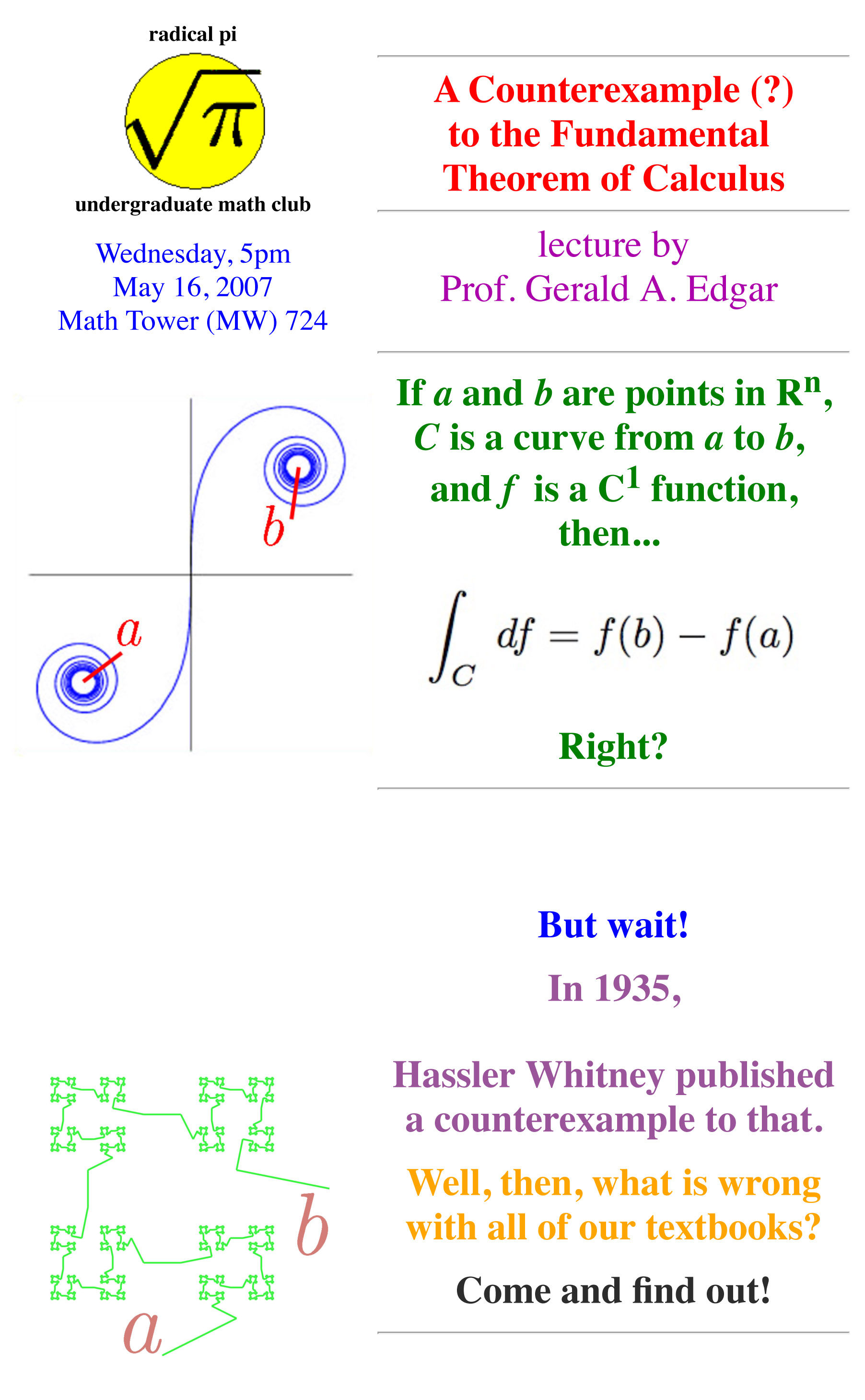 Not the answer you're looking for? Browse other questions tagged dg.differential-geometry ap.analysis-of-pdes oa.operator-algebras noncommutative-geometry fractals or ask your own question.

174
How do I make the conceptual transition from multivariable calculus to differential forms?
1
Green's functions of Stokes flow?
5
Navier-Stokes equations in Riemannian geometry
2
Solutions to Heat Equations with Obstacles!
6
Applications of Hodge-de Rham Laplacian on p-forms ($p\neq 0,n$) in physics or engineering
4
Classical theory for the incompressible Euler equation (reference request)
12
Has it been proved that weak solutions to the Navier-Stokes equations are non-unique, and does this prove that the Navier-Stokes are not valid?
2
Reference request: Schauder estimate in the space variable for parabolic equations
Question feed