Discrepancy bounds for moderate points counts in dimensions from d=2 to 32?

In one dimension d=1 an equally-spaced set of N points in [0,1) has the lowest possible (star) discrepancy D=0.5/N. Unfortunately, I found only asymptotic bounds for other dimensions (e.g. acc. to Schmidt and Roth). These best-known lower bounds are so bad (also they are known to be "tight"), that for moderate N and d (like N=10..1000 and d=2) they can be off by a factor of 10 or more.

I would like to have a table D vs N and d (or formulas) for comparing D for the best-known low-discrepancy sets, e.g. against regular grids (for which an exact formula exists) or random sets (here I also found no formula, and simply creating a rnd set and calculating D is also extremely time-consuming.

Actually, I am very suprised because at least for d=2 a Fibonacci set delivers a very low, almost perfect discrepancy, so very low errors for Monte-Carlo integration.

The sort of question you ask (considering the influence of dimensionality on computational complexity) is called tractability theory. In the context of discrepancy, see volume II of the book of Novak and Woźniakowski: Tractability of multivariate problems.

This may not be what the OP seeks, but the paper below contains quite a bit of detailed numberical tables for low star-discrepancy sets. Star discrepancy $d^*$ takes the supremum over rectangles that include the $(0,0)$ corner. The discrepancy $d$ is bounded between $d^*$ and (alas!) $4 d^*$ (in the plane). 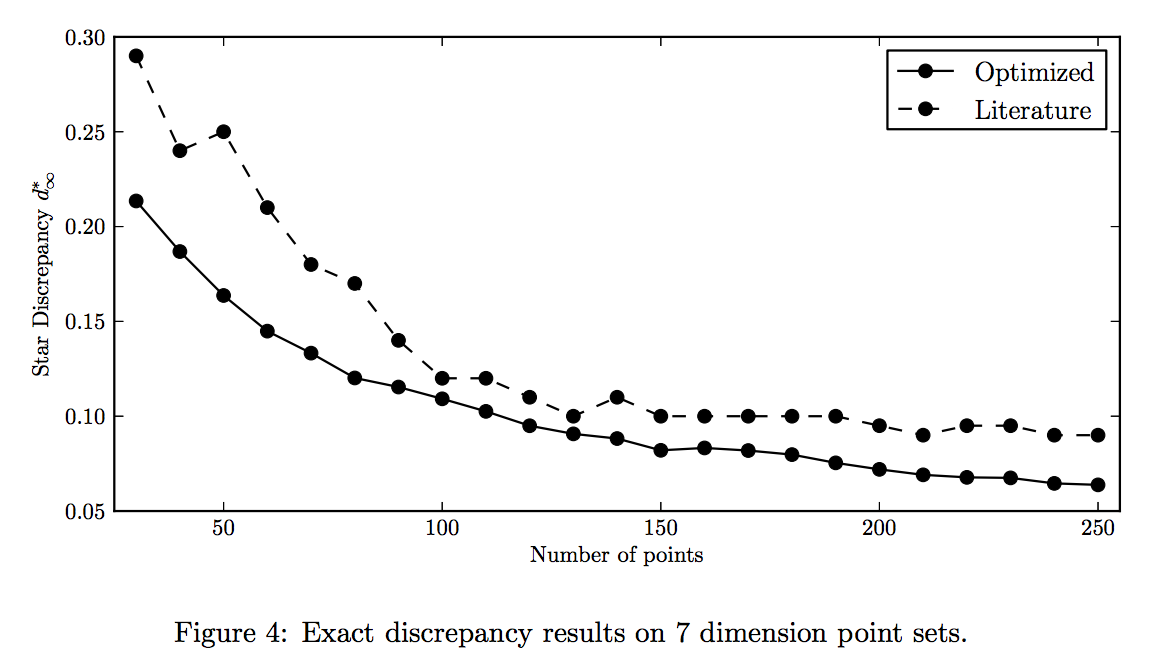 Not the answer you're looking for? Browse other questions tagged mg.metric-geometry integration lower-bounds discrepancy-theory or ask your own question.