A "paradox" regarding Voronin's universality theorem

Which practically means that $g(s)$ could be approximated by $\zeta(s)$ for some "high enough" values of $\tau$ - on the right hand side of the critical strip.

The thing is that there is a certain numerical "mystery" with respect to this theorem - when it comes to the question "how high is high enough"? Of course - there are effective analytic studies in various cases. But its worthwhile to pay attention to direct calculation via computer - it turns out to be really "hard" to verify Voronin numerically (in my eyes, the illustration makes the theorem even more impressive).

Question: Is there any estimate on $\tau$ for which Voronin's approximation works for $g(s)=e^{3}$? 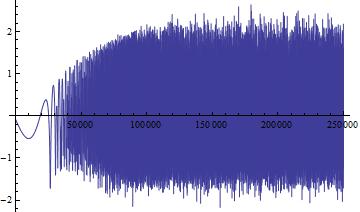 As you can see - for quite big values - the function still doesn't seem to cross the bound $\pm 3$. So when does Voronin's theorem start to kick in this case?

(It is interesting to note also some implications to zeros of zeta (RH), for instance.)

Update: "Can you give an estimate...?" The point of my answer was to show why $\tau$ will likely be quite large for the function you chose, beyond the range where computation is easy. Your comment below indicates you're not really asking about Voronin's Theorem; you're asking about making effective the constants implied by Titchmarsh's use of O. Many of these can be made effective by paying careful attention to the proofs. It depends how badly you need them whether it's worth the effort.

Not the answer you're looking for? Browse other questions tagged reference-request riemann-zeta-function or ask your own question.

16
On the Universality of the Riemann zeta-function
0
Efficient way for computation of derivatives of $f(x) = \zeta(1-x) + 1/x $ at integer x?
7
Confusion about Montgomery's pair correlation conjecture
3
Does the Riemann Xi function possess the universality property?
10
What is known about sums of the form $\sum_{n=2}^{\infty}[\zeta(n)-1]^{p} $?
2
Analytic continuation and convergence of a Riemann zeta related function
2
A expression for the tangent function involving $\zeta(n),n=2,3,\ldots$
Question feed