What Kind of Graph is This?

I am currently developing TSP heuristics that aim at symmetrically reducing the original, complete and undirected graph.

The overarching rationale is that the reduction is done via a sequence of regular graphs. In view of Tutte's counterexample to Tait's conjecture, it is clear that generating a sequence of maximally vertex-connected graphs need not produce a Hamiltonian tour ($=$Hamiltonian cycle) in the end.

The rationale that I am trying to follow is that the intermediate graphs should also be vertex-symmetric in other respects than just vertex-connectivity (in Tutte's counter-example graph the vertices are not equal with respect to the size of adjacent "facets").

When trying to guarantee that the intermediate regular graphs are also symmetric in some other specific sense, it was found that the following directed graph could help accomplish that:

Has that kind of "derived" graph $H\left(N,A\right)$ already appeared in mathematical publications and what is it called (it has some aspects of an incidence graph, but also of an adjacency graph)?

Short answer. Your question, strictly construed, does not have a noteworthy answer (I think), and there is good reason that it doesn't: your graph $H$ 'is'1 just the Levi graph(=bipartite incidence4 graph) of $G$. Using directed edges to encode the non-incidences is redundant because in an incidence graph (at least if you are working in material set theory) the vertices are usually meaningfully labelled by the very constituents of the original incidence structure, so all the information about the original not-necessarily bipartite graph is still there, even if you refrain from adding edges for non-incidences. In a sense, if you start adding edges for non-incidences into a Levi graph, you spoil it, and then have to make amends by adding all the edges, and then start over with the encoding of your original graph, e.g. by equipping it with direction, like you did. In that sense, this is overly complicated. (I recognize that you may have private reasons to insist that $H$ have the type 'digraph', I just do not know these reasons.)

If you insist for whatever reasons that the result of your 'derived graph' be a digraph, then (I think) there does not exist a noteworthy literature reference.

[...] I see that I have to come up with a precise definition.

If you do not insist that the result of you operation be a "digraph" (in the sense of e.g. the monograph of Bang-Jensen and Gutin), then you do not need to "come up" with a definition. Then it is sufficient to simply0 say

If you insist that the result be a digraph, then that's another matter, and then you may use the definition you already gave. (I did not say said definition of yours was imprecise, it was merely very usually written, to the point of being almost-wrong at places.)

My recommendations would be to try to keep reasonably close to usual graph-theoretic notation, rather than "to come up" with something new. Of course you have a right to unusual notation, it will simply make it less likely that you will be understood.

A. Weil put it well in his textbook "Foundations of Algebraic Geometry", American Mathematical Society, 1946, Introduction:

in a treatment, of this kind, particular attention must be and has been given to the language and, the definitions. Of course every mathematician has a right to his own language - at the risk of not being understood; and the use sometimes made, of this right by our contemporaries almost suggests that the same fate is being prepared for mathematics as once befell, at Babel, another of man's great achievements. A choice between equivalent definitions is of small moment, and two theories which consist of the same theorems are to be regarded as identical, whatever their starting points. But in such a subject as algebraic geometry, where earlier authors left many terms incompletely defined, and were wont to make (sometimes implicitly) assumptions from which we wish to be free, all terms have to be defined anew, and to attach precise meanings to them is a task not unworthy of our most solicitous attention. Our chief object here must be to conserve and complete the edifice bequeathed to us by our predecessors.

which reads eerily relevant to some parts of mathematics today. (Note also: somewhat ironically, despite the author's well-meaning attempt, his language for algebraic geometry has largely been replaced by the one from the EGA and SGA.)

Yet: there is an equivalent definition and you should use that (I think) unless you have reasons to insist that the result of your operation be a digraph.

(1) Beware that in the literature the following distinction is often glossed over: (1.0) "abstract incidence graph of a given undirected simple graph" in the strictest sense (i.e., said incidence graph is again a graph, no further decorations,) and (2.1) "incidence graph in which the vertices are still the parts of the given original, so that no information is lost".

Authors sometimes only give the definition of the incidence graph $I(G)$, in terms of the (names of the) vertices and edges of the given graph $G$, but do not say whether they assume that the vertices are labelled by the data by which $G$ was given.

More clearly, formally, I think one can meaningfully distinguish theh following. Let $G=(V,E)$ be a given undirected simple and, as mathematician working with material set theory are wont to say, 'labelled' graph. That is, $G$ is a graph as e.g. in Diestel, Graph Theory, 4th ed.

This is a subtle variant of the labelled-vs-unlabelled graph distinction: while both these terms are reasonably standardly defined, there is no standard definition for "labelled graph with labels that we care about", so to speak.

(3) The graph $H(N,A)$, to use use your notation (that I warn you against), contains (and with an obvious encoding) the same information as what is usually called the bipartite incidence graph (shorter, usual2 less pleonastic3, yet also less descriptive term: Levi graph) of the graph $G$, with $G$ being viewed as an incidence structure $(V,E,I)$ having the (elements of the) set $V$ for its points, the (elements of the) set $E$ for its lines, and $I\subseteq V\times E$ given by $(v,e)\in I$ $\Leftrightarrow$ $v\in e$

0 Please be careful though: often, even more often than not I would say, in the literature a Levi graph is considered to be a 2-colored graph (not to be confused with 2-colorable graph). In that sense, strictly speaking a Levi graph in the literature, unlike in the suggestion above, is often not a graph in any of the usual senses of 'graph' whihch never allow attaching custom data to vertices, a Levi graph is often, unlike in my suggestion above, considered to be a 2-colored graph. Example from the the peer reviewed literature is Dragan Marušič,Tomaž Pisanski, Steve Wilson: European Journal of Combinatorics, Volume 26, Issues 3–4, April–May 2005, Pages 377-385, wherein on p. 378-379 one finds:

and the illustration (which also illustrates the Coxeter-citation given in this answer, by the way) 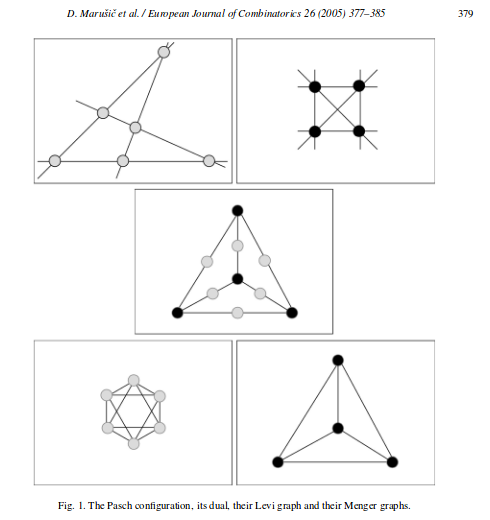 While such an approach is very useful, there does not exist an agreement how to carry it out. No such agreement exists, and probably cannot exist in view of insufficient criteria how to decide what is essential for you. It does not seem worthwhile to get into an argument about it. 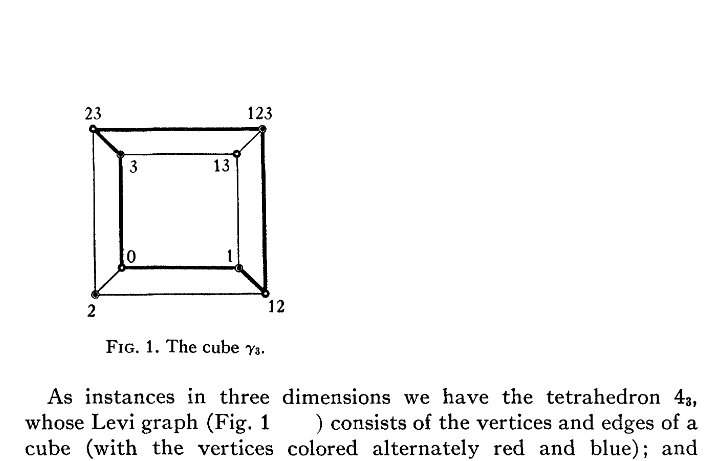 4 To give an example from the literature that the notation $v\in e$ I recommended elsewhere is usual, consider e.g. Diestel, Graph Theory, 4th edition, p. 2, which gives a way of putting it which is usual nowadays:

Incidentally, this also gives one more reason why the notation $G(V,E)$ in the original OP is not to be recommended: it is similar to $E(X,Y)$, hence will read to some as if you had named an edge set by '$G$', a vertex by '$V$' and another vertex set by '$E$', which is confusing (to me).

Not an answer, yet too large for the comment box and thought to be useful for others to quickly parse the slightly unusual formalism in the OP: the OP asks for literature references and usual technical terms for the class function with domain the class of all simple undirected graphs and codomain the class of all oriented complete bipartite graphs which, in particular, does what is represented by the following: 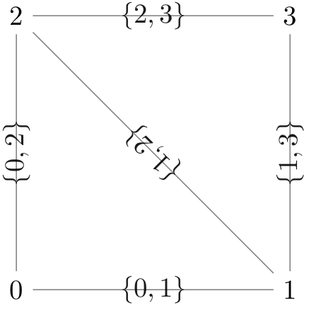 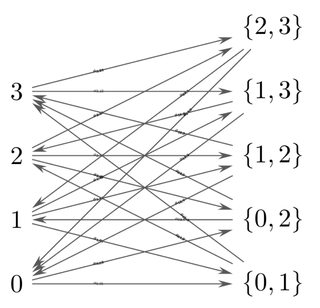 Not the answer you're looking for? Browse other questions tagged graph-theory terminology directed-graphs traveling-salesman-problem or ask your own question.

5
How many hamiltonian cycles can be removed from a complete directed graph before it becomes disconnected?
4
Name for directed graphs with "balanced cycles"
4
Removing cycles in a directed graph by swapping edges orientation
4
Lifting of a spherical graph
2
Generating short Hamilton cycles from complete graphs
Question feed