Transport tubes in a sphere

The lines are like very fast transportation tubes. (I have in mind Star Wars' Coruscant.)

Q1. Is there a better arrangement of the three tubes? 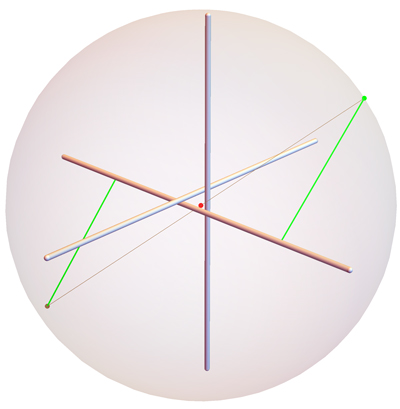 Thanks to Ilya Bogdanov, I have faced this problem more squarely. He (gender presumption) had me convinced that my cylinder reformulation was not equivalent. It may not be, but I think it helps solve the posted problem.

An earlier non-visible attempt at this analysis considered the distances between tubes, and attempted to account for the differences. However, for most configurations of tubes, we can dispense with these transfer point distances by observing that there are 2^d many points on the d sphere that are equidistant from all (also assuming a sufficiently small tube radius) tubes. (One can find tube configurations where this is not true, however I conjecture that none of these provide an optimal arrangement.) Then there is a pair of points which is at least (and in fact exactly) R+S apart, where I pick R and S as the two largest of these 2^d equidistances.

I now conjecture that for any configuration that has these distances, an optimal configuration has R=S. We now have moved into covering the sphere by cylinders of constant radius. At this writing, I leave the numerics to others, as well as resolving the conjectures.

9
Length spectrum for Riemannian metrics in the projective plane
14
Optimal wireframe sphere
4
Blowing up spheres in a face centered cubic (fcc) packing geometry just enough to cover the volume of the lattice
5
Panning for gold nuggets: a type of isoperimetric problem
13
Intersecting cylinders around a sphere
Question feed