The (recently solved) inscribed square problem or Toeplitz conjecture posits that every closed, plane continuous (Jordan) curve ${\it \Gamma}$ in $\mathbb{R}^2$ contains all vertices of some square. It appears this theorem was just proven!

Most examples resemble the one on the left, in which the natural continuous parameterization along ${\it \Gamma}$ intersects the square's points in sequence. Let's call such an inscription cyclic. 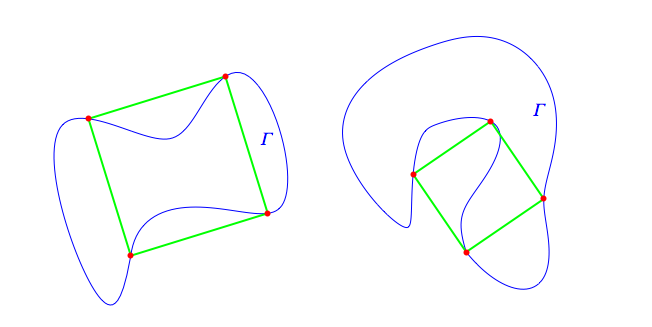 However, some Jordan curves contain the points of a square in non-sequential order, such as shown at the right. Let's call such an inscription acyclic.

My conjecture is that there are no such acyclic-only Jordan curves. My first approach has been to assume that there is a given acyclic square inscription for a Jordan curve and then prove--invoking continuity assumptions and topological methods--that there must also be a cyclic inscription. Alas, such a proof for even this partial case has been elusive.

The recent work by Jason Cantarella, Elizabeth Denne and John McCleary implies (but does not prove) that the answer to all questions is negative, as I conjectured. Specifically, under certain general conditions one can find a cyclic inscription, and thus precluding the existence of an acyclic-only Jordan curve.

I am not a member here and so could not provide a comment. The claim that it has recently been solved is inaccurate. Green and Lobb solve the $\textbf{smooth}$ version of the Rectangle Peg Problem. For the square case, that’s been known since about a 100 years now (I suppose Schnirelman was the first) or at least some decades now. Indeed, it is true for all continuously differentiable curves.

I suppose you can check a few results of Richard Schwarz, in the last couple of years, which may answer your questions regarding the (a)cyclicality.

Not the answer you're looking for? Browse other questions tagged dg.differential-geometry curves or ask your own question.

5
Approximating Jordan curves
2
Can this simple integral be zero for a Jordan curve?
7
Uniformisation for non simple closed curves
8
Jordan curves in $\mathbb R^n$ and inscribed equilateral triangles
1
Existence of horizontal lifts in $G$-bundles
3
Large class of curves which only intersect each other finitely many times
3
Number of curves in an admissible system of Jordan curves on a surface
25
Surprising properties of closed planar curves
Question feed