It’s known that Penrose tilings have several implementations that are mutually locally derivable; but the sources (such as en.wikipedia) list no more than three essentially different variants. There is no difficulty in inventing yet another one by modifying tiles’ shape (and possibly rearranging them), but a “random” set of Penrose tiles will almost certainly contain irregular shapes. A (new) aperiodic tiling with a very regular shape of each tile is no trivial thing.

Ī̲ stumbled, by chance, on an aperiodic tiling locally derivable from the Penrose tiling. Its set of tiles consists of three regular shapes: ♢(72° rhombus), ⧫(36° rhombus), and ⬠(the regular pentagon); all having the same side length.

With the green curve commonly depicted on Penrose tilings, SVG format.
at Wikimedia Commons: More tiles, edges only; Both green and red curves.

Surely a set of rules can be formulated to ensure that only aperiodic tilings can be constructed from ♢ ⧫ ⬠. One can notice that ♢ is employed in two distinct rôles; even counting this, we have only four sorts of tiles compared to 6 sorts of tiles (of 4 distinct shapes) from the original (but now almost forgotten) P1. By the way, it seems to me that the ♢ ⧫ ⬠ tiling might be related to P1 closer than to P2 and P3.

It it really a new discovery worth publishing ? Should Ī̲ now finish the job by proving, from appropriate rules (see below), local derivability: Penrose tiling ⇐ ♢ ⧫ ⬠? If Ī̲ should, then give me, please, references to terminology and theoretical background that are currently in use by experts.

Update July 20: A sequence of simple rules is found that makes ♢ ⧫ ⬠ from a P2.
1. For each long side of a kite shared with another kite, dissect a 36°-72°-72° triangle (taking entire kite’s short side and smaller part of the long side with it) from the kite. After dissecting one triangle a trapezoid remains, and in the case of dissecting two the remnant is a ♢.
2. Unify each pair of these triangles sharing their short side to a ⧫.
3. Dissect each dart to two mirror-symmetric 36°-108°-36° triangles.
4. Unify each half-dart with the shape across its long side. This means, just erase all respective edges.

Update July 10: Now Ī̲ try to formalize rules that a ♢ ⧫ ⬠ tiling derivable from Penrose tiling must obey. The conditions listed below are necessary, but Ī̲’m unsure neither about sufficiency nor about minimality.

Ī̲ have other variants for fifth rule, but this one has an advantage to be edge-based (as is customary in tiling theory) and pretty in line with the rule 4.

Seems like the following (not entirely rigorous, I admit) rules prove this tiling to be MLD with the Penrose P2 (darts-and-kites) tiling: 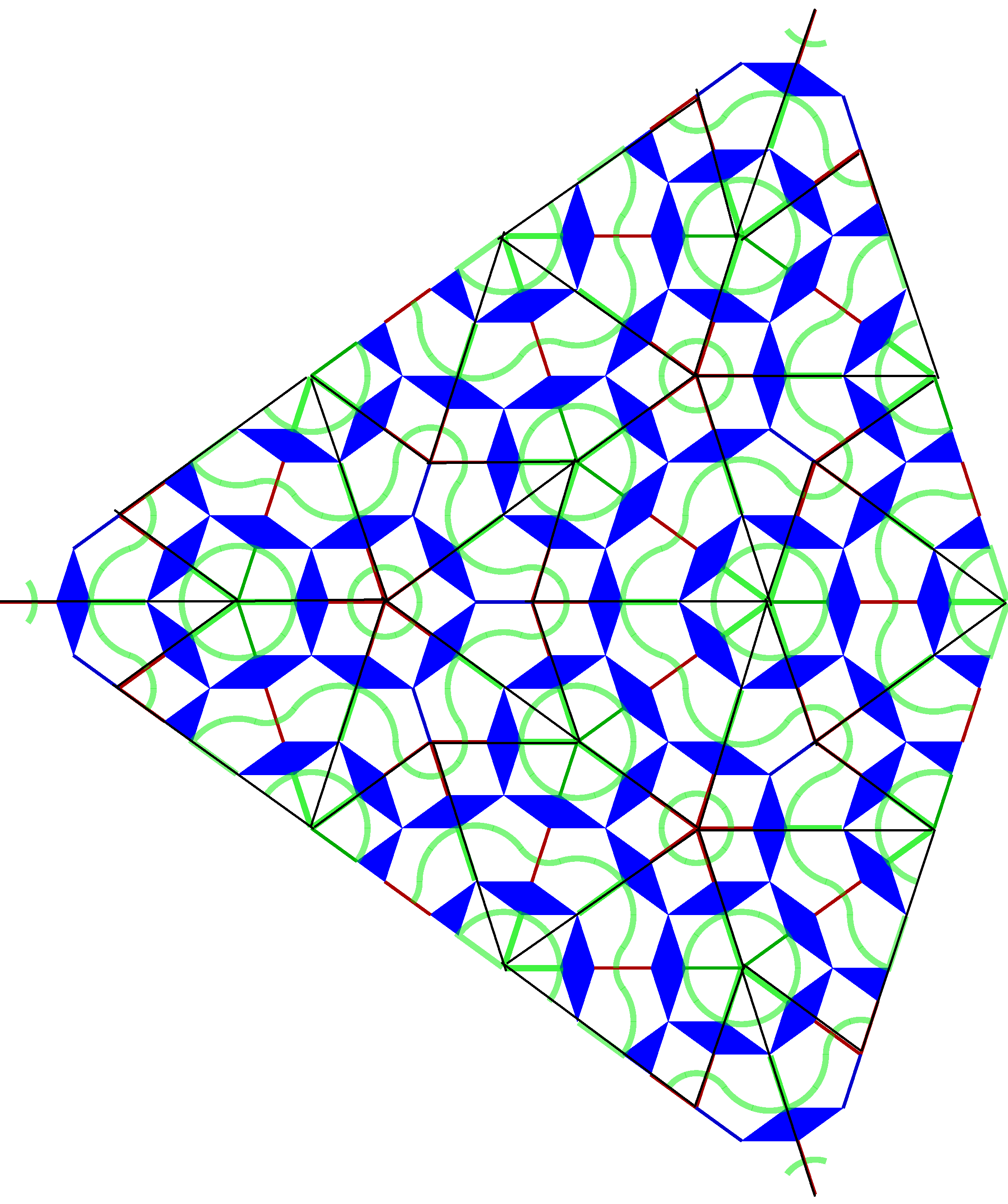 In fact, as suggested by OP comments, the two tilings can be made closer to each other by switching to the next P2 generation. The rules however become slightly less obvious. Edges of the new P2 (yellow ones in the pictures below) are in 1-1 correspondence with the union of:

(2) all pentagons (each is cut into an obtuse triangle and a trapezoid by a unique edge). 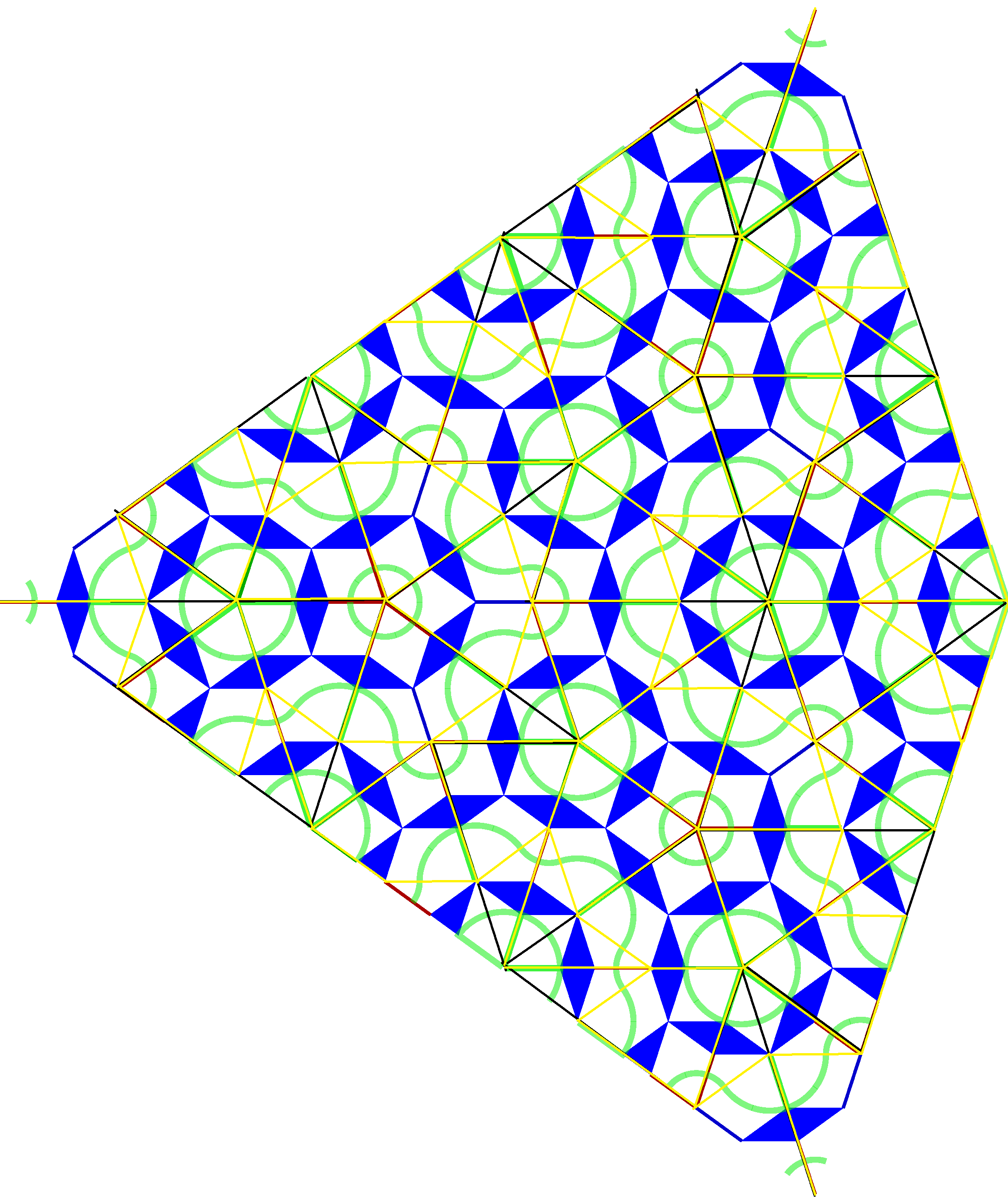 As for decorations for kites and darts, all darts are again uniquely decorated,

, but there are now three kinds of kite decorations -

The system of ♢ ⧫ ⬠ prototiles might deserve research for its own merits, but (with derivation rules given) it isn’t very convenient for encoding Penrose tilings. Conditions sufficient for Penrose-equivalence do not formalize as matching rules for it. They can be made a sort of local conditions on blocks of tiles, but these are not rules about edge-sharing of the type “you may connect this side to that side with specified orientation”, nor do restrictions on vertex figures help with it.

As for “fourth”, “fifth” etc. set of rules for Penrose tilings, Ī̲ found other (albeit closely related) system of three prototiles much more convenient for derivation of them and serves as a transition from ♢ ⧫ ⬠ to the P3 system, and (by August7) yet another tiling, purely ♢ ⧫ ⬠ but looking differently, where (sufficiently) Penrosean matching rules exist.

For details, see the article Ī̲ wrote (but having difficulties to publish it even at arXiv.org due to their endorsement policy; see inside).

Not the answer you're looking for? Browse other questions tagged co.combinatorics discrete-geometry fractals tiling or ask your own question.

11
What is the right way to think about / represent general tilings?
8
What are Penrose Tilings, and how do they relate to Quasicrystals?
13
Random walk on a Penrose tiling
2
How is the Penrose tiling decapod count of 62 calculated?
2
Aperiodic tiling of compact space by small number of basic tiles
5
Distribution over Penrose Tilings?
2
Automorphism group of a normal tiling of the plane
Question feed