What Are Some Naturally-Occurring High-Degree Polynomials?

To construct J. H. Conway's look-and-say sequence, begin by putting down a 1 as the first entry. The other entries are found by saying the previous entry aloud, and writing what you hear.

Conway provides his usual fantastical analysis in The Weird and Wonderful Chemistry of Audioactive Decay [Eureka 46, 5-18], where he demonstrates several otherworldly properties of this sequence. One was this: the ratio of the lengths of consecutive entries has a limit, $\lambda$. Furthermore, $\lambda$ is the root of a polynomial of degree 71.

Now, when I was in high school we were taught the quadratic formula and told there is a cubic formula, but you don't have to learn it. Why? "You won't be needing it." And mostly I've found that to be true. Am I wrong, or do high-degree polynomials rarely occur (in uncontrived settings)?

What are some other examples of useful roots of polynomials of high degree? Power series and the like can obviously produce useful polynomials of arbitrarily large degree, but I'm looking for surprises such as the degree-71 polynomial at the heart of the look-and-say sequence above.

"Chebyshev in his work on the distribution of prime numbers used the following fact $$ u_n:=\frac{(30n)!n!}{(15n)!(10n)!(6n)!}\in\mathbb Z, \qquad n = 0, 1, 2, \dots $$ (see also my question -- WZ). This is not immediately obvious (for example, this ratio of factorials is not a product of multinomial coefficients) but it is not hard to prove. The only proof I know proceeds by checking that the valuations $v_p(u_n)$ are non-negative for every prime $p$; an interpretation of $u_n$ as counting natural objects or being dimensions of natural vector spaces is far from clear.

Some high-degree polynomials have been discovered using integer-relation algorithms applied to the powers of interesting constants. Here is a quotation from Section 3 of a paper of David Bailey, which can be found here: http://www.nersc.gov/homes/dhbailey/dhbpapers/pslq-cse.pdf

"One of the ﬁrst results of this sort was the identiﬁcation of the constant B3 = 3.54409035955 · · · [1]. B3 is the third bifurcation point of the logistic map $x_{k+1} = rx_k(1 − x_k )$, which exhibits period doubling shortly before the onset of chaos. To be precise, B3 is the smallest value of the parameter r such that successive iterates $x_k$ exhibit eight-way periodicity instead of four-way periodicity. Computations using a predecessor algorithm to PSLQ found that B3 is a root of the polynomial

which is a sextic with a non-solvable Galois group. Recently, B4 = 3.564407268705 · · ·, the fourth bifurcation point of the logistic map, was identiﬁed using PSLQ by British physicist David Broadhurst [5]. Some conjectural reasoning had suggested that B4 might satisfy a 240-degree polynomial, and some further analysis had suggested that the constant $α = −B4 (B4 − 2)$ might satisfy a 120-degree polynomial.

The high-degree polynomial $x^{65537}-1$ is interesting because its nontrivial roots can be expressed in terms of square roots, and thus (in principle) the regular 65537-gon is constructible by ruler and compass. It is the largest known constructible $n$-gon with a prime number of sides. The roots, however, occupy several megabytes when written out in full.

If you accept polynomials in more than one variable...

There is a polynomial inequality in 26 variables that describes the set of primes: 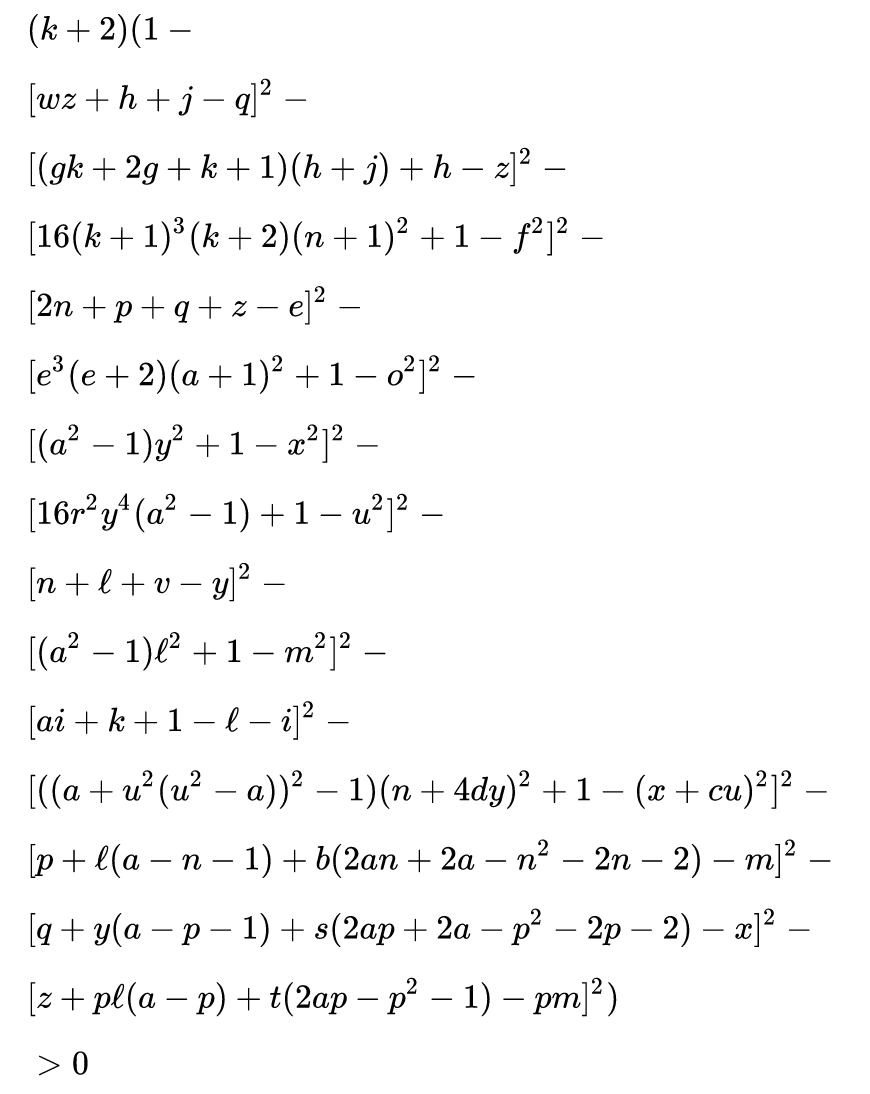 I was recently amazed by an answer to this question.

Some high degree polynomials appears in Delsarte scheme for estimating kissing numbers in $R^n$. Here is the excerpt from the Florian Pfender and Gunter M. Ziegler. Kissing numbers, sphere packings, and some unexpected proofs:

Cyclotomic polynomials (http://en.wikipedia.org/wiki/Cyclotomic_polynomial), which when n is composite are rather more complicated than you might guess.

I think the point here is that polynomials play an implicit part all over algebra; and in algebraic geometry. The case of a quadratic equation is somewhat misleading, if useful on its own ground. It is possible to reason about polynomials without knowing exactly what the solutions look like. It is possible to solve numerically for roots of polynomial equations, without having a formula; and indeed the formulae we know for degree 3 and 4 are not necessarily useful for numerical work.

Fairly concrete examples are seen in the theory of Laplace transforms, where differential operators become, thanks to the transform, operators of multiplication by polynomials. Here engineering applications that have on the face of it no connection to polynomials may be studied by means of them, and the complexity of the polynomial reflects that of the problem you start with.

Calculators compute the exponential function in the range [0,1] by evaluating a 12 degree polynomial whose coefficients are chosen so as to get 8 or 10 digits correct. These approximating polynomials can be found in formulas handbooks (e.g. "Methods and Programs for Mathematical Functions". Also the EDM lists a few in its appendices). They do a better job, at the given precision 10^(-8), than the standard Taylor polynomials.

Also have a look at your favorite language mathematical library, to see how standard functions (sin, exp, Atan...) are implemented (someone may suggest a link ?).

Note that this does not duplicate the effect of calculating genera, that process divides up the primes by very simple congruences. The theorem comes into play with primes that are represented by some form in the principal genus, therefore automatically if there is only one genus. A prime is represented by at most one class $a x^2 + b x y + c y^2$ (and its opposite $a x^2 - b x y + c y^2$ if distinct) among forms of a given discriminant. There are similar theorems for odd discriminants and $x^2 + x y + k y^2,$ in case this $k > 0$ is even it is the same theorem, for utterly trivial reasons.

It is this problem I had with me when arriving at MO, in the same sense that Grace Slick arrived at Jefferson Airplane with "Somebody to Love" and "White Rabbit." I found all such problems for class number 3, and I'm guessing Kevin Buzzard's methods could finish all of them. I would like to know whether the same problem produces interesting phenomena in class number 5.

Meanwhile, Kaltofen and Yui made a serious effort to find such polynomials with small coefficients in "Explicit Construction of the Hilbert Class Fields of Imaginary Quadratic Fields by Integer Lattice Reduction," with table B5 giving three pages of polynomials.

He writes out the numerator and denominator explicitly at the end of the paper (and it takes 3 pages),

Don't people compute eigenvalues of very large matrices all the time? Those are the roots of the characteristic polynomial...

This paper of Skalba gives three degree 26 rational functions $X_1, X_2, X_3$ such that for any $t \in F$, exactly one of $X_1(t), X_2(t), X_3(t)$ represents the $x$ coordinate of a point on the curve. This is super useful for hashing into elliptic curves, which you sometimes need to do in cryptographic applications.

The rational functions are 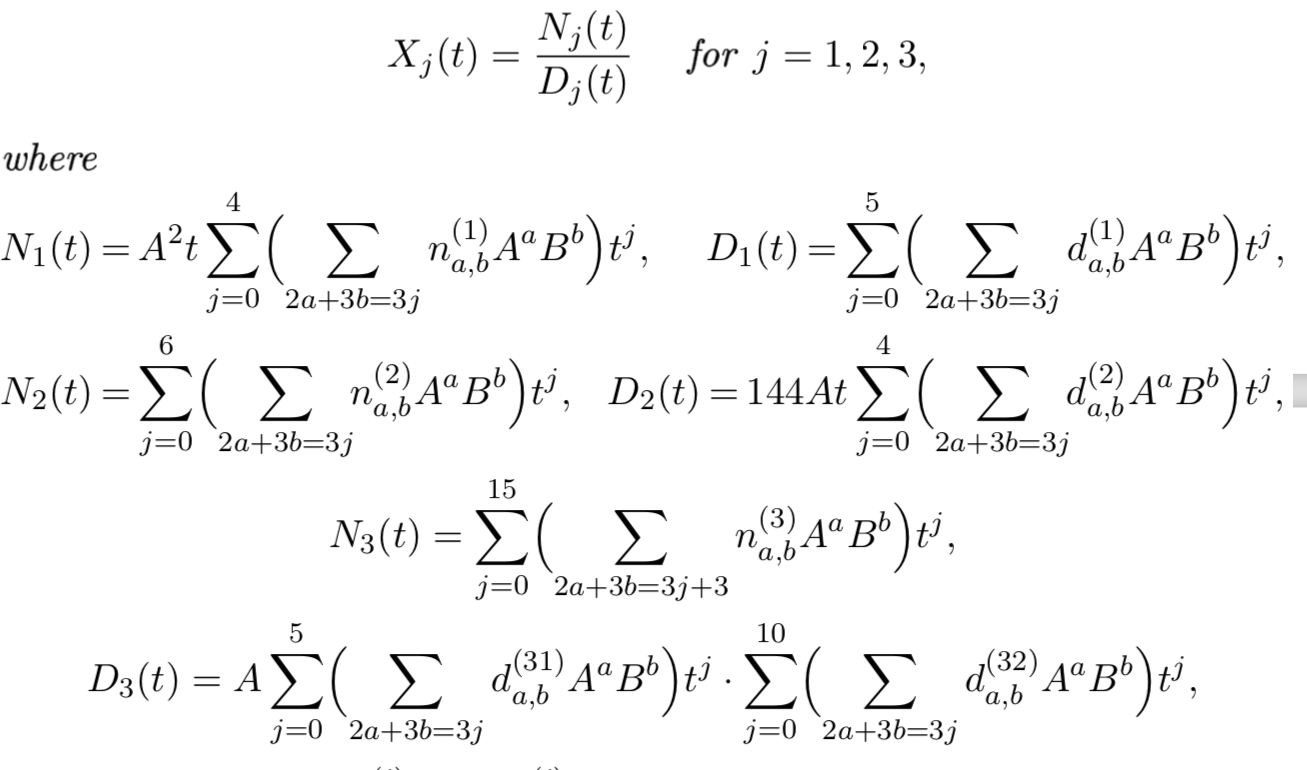 Not the answer you're looking for? Browse other questions tagged polynomials sequences-and-series or ask your own question.

203
Have any long-suspected irrational numbers turned out to be rational?

9
Is this sequence of polynomials well-known?
2
Looking for methods to solve multivariate non-traditional polynomial sequence recurrence relations
21
Using higher-order Bring radicals to solve arbitrary polynomials
4
Why are all these families of polynomials finally log-concave?
18
An algebraic number is not a root of unity?
1
The Stone-Weiestrass convergence for polynomials in different bases
4
Calculating “factorial sequence” of a rational function
5
What are ways to compute polynomials that converge from above and below to a continuous and bounded function in $[0,1]$?
Question feed