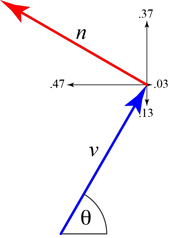 Q. Does Pólya's recurrence theorem hold for these walks? Do the walks return to the origin with probability $1$?

All but one of the above examples (the penultimate) returned to the origin, but usually rather quickly.

Here is the theorem cited in Serguei Popov's answer:

and here are the three assumptions: 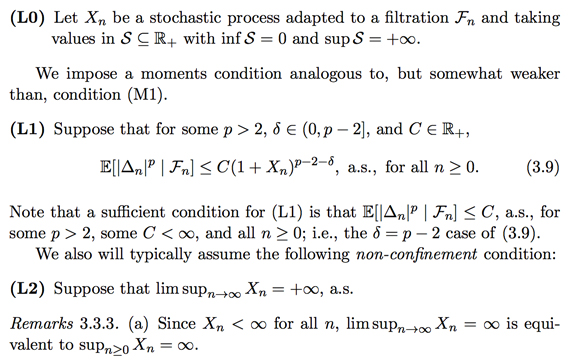 Forgive this simple-minded approach, but it may be instructive when made rigorous by someone who knows what they are doing.

I think Anthony Quas's suggestion of looking at radius good, but I do not understand his use of the word 'recurrent'. The probability of going east-west is 1/2, as is going north-south. However, most of the time, the probability for increasing the distance from the origin is greater than 1/2. This is because one of (say) east west is biased toward increasing distance, while the other (say) is half increasing and half decreasing. So for near the origin, there is a chance of returning, but (as Martin Hairer suggests) once you get far enough away, the dynamic seems transient.

I turn the calculation of "far enough away" over to those with more experience. I suspect the probability of returning to within S distance of the origin given one is at distance R in this dynamic is exponential in S-R (I assume S less than R).

Not the answer you're looking for? Browse other questions tagged pr.probability random-walks or ask your own question.

23
When do 3D random walks return to their origin?
4
Probability of a topologically non-trivial random walk on a finte torus
8
A discrete random walk that avoids previously visited vertices for an exponentially distributed time interval
2
Manhattan distance vs. absorption time on an unbounded integer lattice
0
Estimates for the mixing time of a Markov Chain with biased initiation
18
Random Walk on $\mathbb{R}$ with Uniformly Distributed Steps and “Reflective” Boundary at Origin
5
Random walk by simplex vertices
12
Lattice random walk under gravity
3
How many times does a simple symmetric random walk of length n return to the origin?
Question feed