The vertices of the Petersen graph (or any other simple graph) can be labelled in infinitely many ways with positive integers so that two vertices are joined by an edge if, and only if, the corresponding labels have a common divisor greater than 1. It has been shown (A labelling of the vertices of the Petersen graph with integers) that the smallest possible sum of these labels is 37294. 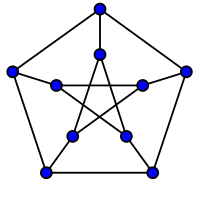 Is there a largest number which cannot be the sum of the labels of the Petersen graph in such a labelling? If so, what is it?

I can prove that all sufficiently large integers are representable.

Firstly, observe that there is a unique way, up to isomorphism, to choose three edges $p, q, r$ of the Petersen graph such that the subgraph induced by their six endpoints is just the union of $p, q, r$.

Now, observe that we can write $2^{16}$ as the sum of semiprimes in three ways such that no prime is repeated:

We're going to label each vertex with the product of the incident edges, with the exception of $v$ which will be labelled by $(5 \times 13 \times 17)k_i$ for some $i$. This means that we can attain any integer of the form:

But by Vinogradov's theorem, any sufficiently large odd integer $N$ can be written as $p + q + r$ for three distinct primes larger than $K$ (because the number of representations asymptotically dominates $N^2$, so we can throw away the $O(N^2)$ representations involving repeated primes or primes beneath $K$).

So to represent an integer $I$, choose $k_i$ to make the following true:

16
A labelling of the vertices of the Petersen graph with integers
2
Are there graphs for which infinitely many numbers cannot be the sum of the labels of its vertices?

2
Decomposition of $K_{10}$ in copies of the Petersen graph
9
The diameter of a certain graph on the positive integers
0
Graphs determined by sets of consecutive integers
16
A labelling of the vertices of the Petersen graph with integers
2
Are there graphs for which infinitely many numbers cannot be the sum of the labels of its vertices?
6
Least number of vertices in a graph with which one can uniquely recover some partition of N
5
Least (and largest) possible number of non-relatively prime pairs among consecutive integers
5
Is the crossing number of the line graph of $K_5$ determined?
Question feed