One of the delights in mathematical research is that some (mostly deep) results in one area remain unknown to mathematicians in other areas, but later, these discoveries turn out to be equivalent!

Therefore, I would appreciate any recollections (with references) to:

Question. Provide pairs of theorems from different areas of mathematics and/or physics, each proven with apparently different methods, and later the two results were found to be equivalent?

The quest emanates from my firm belief that it is imperative to increase our awareness of such developments, as a matter of collective effort to enjoy the value of all mathematical heritage.

There is always this charming story about the encounter between Freeman Dyson and Hugh Montgomery.

Consider $n$ evenly spaced points on a circle representing $\mathbb{Z}^n$. Two sets of points with the same multiset of distances between them (measured by the shortest distance around the circle) are said to be homometric. In the music literature, homometric point sets correspond to pitch-class sets with the same intervalic content, and this theorem is known as the "hexachordal theorem":

In particular, Schoenberg realized that two complementary chords of six notes each in a twelve-tone scale have identical intervalic content, and so have analogous "aural effects." 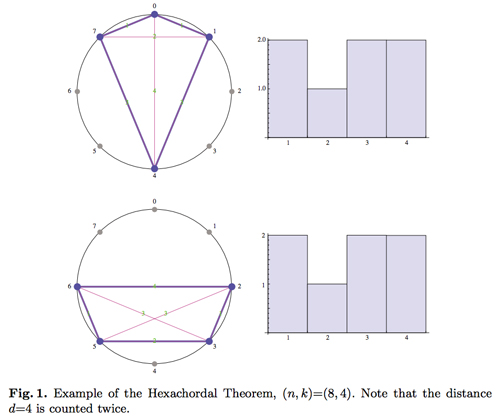 
The following history was uncovered by Godfried Toussaint in the early 2000's.

The hexachordal theorem was originally proved in the music literature by Lewin in 1960 (1), and subsequently followed by many different proofs in the music-theory and mathematics literature, including a proof by Blau in 1999 (2):

However, the theorem was known to crystallographers about thirty years earlier, who were interested because X-rays depend on inter-atom distances, and so homometric sets have ambiguous X-rays. The theorem was first proved by Patterson (3), and again followed by many different proofs in the separate crystallography literature, including most recently a proof by Senechal (4):

The separate literature threads were united by Toussaint, as mentioned above.

Not particularly profound, but with far-reaching practical consequences, is this equivalence between results from 19th century astronomy and 20th century digital data processing: The efficient method invented by Gauss (1805) to calculate the interpolation of orbits of celestial bodies was rediscovered a century and a half later by Cooley and Tukey (1965) to calculate the discrete Fourier transform of $N$ numbers, see Gauss and the history of the Fast Fourier Transform.

An example which always puzzled me is J. Milnor's paper entitled Eigenvalues of the Laplace operator on certain manifolds, Proc. Nat. Acad. Sci. U.S.A. 51 1964, 542. The whole paper occupies about half a page and essentially consists of explaining an implication of one result in the references. It just brings to the attention of the specialists in one area (spectral theory) a known result from completely different area (theory of lattices).

The Lovasz Local Lemma in combinatorics (due to Erdös and Lovász) is essentially equivalent to a theorem of Dobrushin in statistical mechanics, as pointed out by Scott and Sokal in their paper "On Dependency Graphs and the Lattice Gas".

In 1927, Macaulay wrote down some explicit combinatorial conditions for a sequence $(k_0,k_1,\ldots)$ to be a so-called "$O$-sequence." He was motivated to study $O$-sequences because he showed that the $h$-sequence $(h_0,h_1,\ldots)$ of a Cohen-Macaulay ring $A=R/I$ must be an $O$-sequence. These combinatorial conditions turn out to be exactly equivalent to the inequalities on the $h$-vector implied by the "upper bound conjecture" (now a theorem), which says that the face vector of a convex polytope (or more generally a simplicial sphere) is maximized by the cyclic polytopes. See Stanley's paper "The Upper Bound Theorem and Cohen-Macaulay Rings" for details on this history (http://math.mit.edu/~rstan/pubs/pubfiles/27.pdf). It is remarkable that the exact same set of inequalities was written down in what had been before Stanley's work two rather independent communities: commutative algebra and convex geometry.

EDIT: I realized much later I was slightly conflating two different things in the previous paragraph; $O$-sequences (also called "Macaulay vectors" among other names) do factor into the proof of the UBT, as explained in Stanley's paper above, but the exact inequalities defining $O$-sequences are more precisely related to McMullen's $g$-conjecture characterizing all possible $f$-vectors of simplicial polytopes (not just maximal $f$-vectors). See the following surveys on the $g$-conjecture: https://arxiv.org/abs/1411.0987 or http://www.billchen.org/unpublished/g-conjecture/g-conjecture-english.pdf or https://math.berkeley.edu/~ceur/notes_pdf/Eur_gConj.pdf.

Pappus and Pascal theorems are good examples of results in classical geometry that reappeared in a rather different context as special cases of the associativity of the addition law on planar cubics.

My personal favorite example of this phenomenon occurred in 1931.

On one hand, Dirac published the paper Quantized Singularities in the Electromagnetic Field which hypothesized the existence of what we would now call a magnetic monopole, and observed using quantum mechanics that the existence of such an object would necessarily imply that electric charge is quantized, meaning it can only occur in integer multiples of some base unit of charge.

On the other hand, Heinz Hopf published the paper Über die Abbildungen der dreidimensionalen Sphäre auf die Kugelfläche which introduced what we now know as the Hopf fibration $S^3 \to S^2$ as a nontrivial element of $\pi_3(S^2)$. This came as a surprise since most topologists at the time, based on their experience with $\pi_1$ and with homology, assumed that $\pi_k(S^n) = 0$ if $k > n$.

These were both shocking results in their fields that opened up huge areas of future research. There was no reason to believe at the time that the results were connected in any way, but with the advent of gauge theory much later we now know that they were secretly about the same thing. The idea is that the monopole that Dirac wrote about would correspond to a connection on a prinicipal $S^1$-bundle over $S^2$. Monopoles of different charges would correspond to connections on different choices of principal $S^1$-bundle, and so Dirac's observation that electric charge would necessarily be quantized corresponds to the topological fact that principal $S^1$-bundles over $S^2$ are classified up to isomorphism by the group $\pi_3(S^2)$, and by Hopf's results this group is isomorphic to $\mathbb{Z}$ with the Hopf fibration as the generator.

There is an extension of de Finetti's characterization of exchangeable stochastic processes as mixtures of i.i.d. processes to arrays due to (independently) David Aldous and Douglas Hoover. The extensions concern stochastic processes in the form of arrays and the notion of exchangeability applies coordinate permutations separately to rows and columns. The theory is equivalent to a characterization of the asymptotic behavior of large dense random graphs due to László Lovász and coauthors.

Detailed information about the connection can be found in the paper Graph limits and exchangeable random graphs by Persi Diaconis and Svante Janson.

Results related to (partial) exchangeability seem to be rediscovered on a more frequent basis, see the survey More Uses of Exchangeability: Representations of Complex Random Structures by David Aldous.

There may be a distinction between what you're talking about and the closely related phenomenon of the same result being rediscovered independently multiple times, and the following may be more illustrative of the latter than the former, but it happens to be interesting to me because I happened to be one of the rediscoverers (fortunately Noga Alon pointed me to the right reference before I published my paper).

A family $\mathscr{F}$ of subsets of a (finite) set is said to be $r$-cover-free if $A_0 \not\subseteq A_1 \cup A_2 \cup \cdots \cup A_r$ holds for all distinct $A_0, A_1, \ldots, A_r \in \mathscr{F}$. The maximum size of an $r$-cover-free family has been studied in three separate fields: combinatorics, group testing, and information theory. References from all three areas are listed in Miklós Ruszinkó lovely paper "On the upper bound of the size of the $r$-cover-free families," J. Combin. Theory Ser. A 66 (1994), 302–310. Part of the reason that it took a long time for the equivalence to be noticed is that it's not obvious what to call such things, and different communities used different terminology. Information theorists were studying "binary superimposed codes," combinatorialists came up with various names such as "$k$-independent" sets (I myself was inclined to call them "$k$-Sperner sets" at first), and I don't think either community was in the habit of looking at the group testing literature.

"John Nash was the first to prove (c. 1949) that Hex cannot end in a draw, a non-trivial result colloquially called the 'Hex theorem', which we now know is equivalent to the Brouwer fixed-point theorem. Apparently, he didn't publish the proof. The first exposition of it appears in an in-house technical report in 1952, in which he states that 'connection and blocking the opponent are equivalent acts'. The earliest published proof of the determinacy of Hex, by David Gale in 1979, also showed that it can be used to prove the two-dimensional Brouwer fixed-point theorem, and that the determinacy of higher-dimensional variants proves the fixed-point theorem in general."

Not the answer you're looking for? Browse other questions tagged reference-request gm.general-mathematics or ask your own question.