I've seen plenty of ancient diagrams representing plane figures.* But I'd like to know how ancient geometers, especially around the time of Euclid, might have represented solids. Did they use diagrams with perspective? Three dimensional models?

*cf. David Fowler, "The Mathematics of Plato's Academy", see the plates between pages 6 and 7

Greek mathematical diagrams are composed of lines, arcs, and letter labels, and may be used to represent two- or three-dimensional objects. Drawing aids such as ruler and compass were sometimes, but not always, used in their construction, while curves in mathematical papyri were typically drawn freehand. Three-dimensional objects in diagrams were drawn using foreshortening of certain elements, as opposed to "painterly" techniques such as shading or consistent perspective. The technique of foreshortening does not work for spheres, and so for problems involving spheres special techniques were required, such as depicting the objects hidden by a sphere as though they were outside it.

Courtney Roby, in The Encyclopedia of Ancient History (2012).

The encyclopedia entry is based on the analysis of Reviel Netz in The Shaping of Deduction in Greek Mathematics.

This is not quite "ancient Greek", it merely dates back to the ninth century... 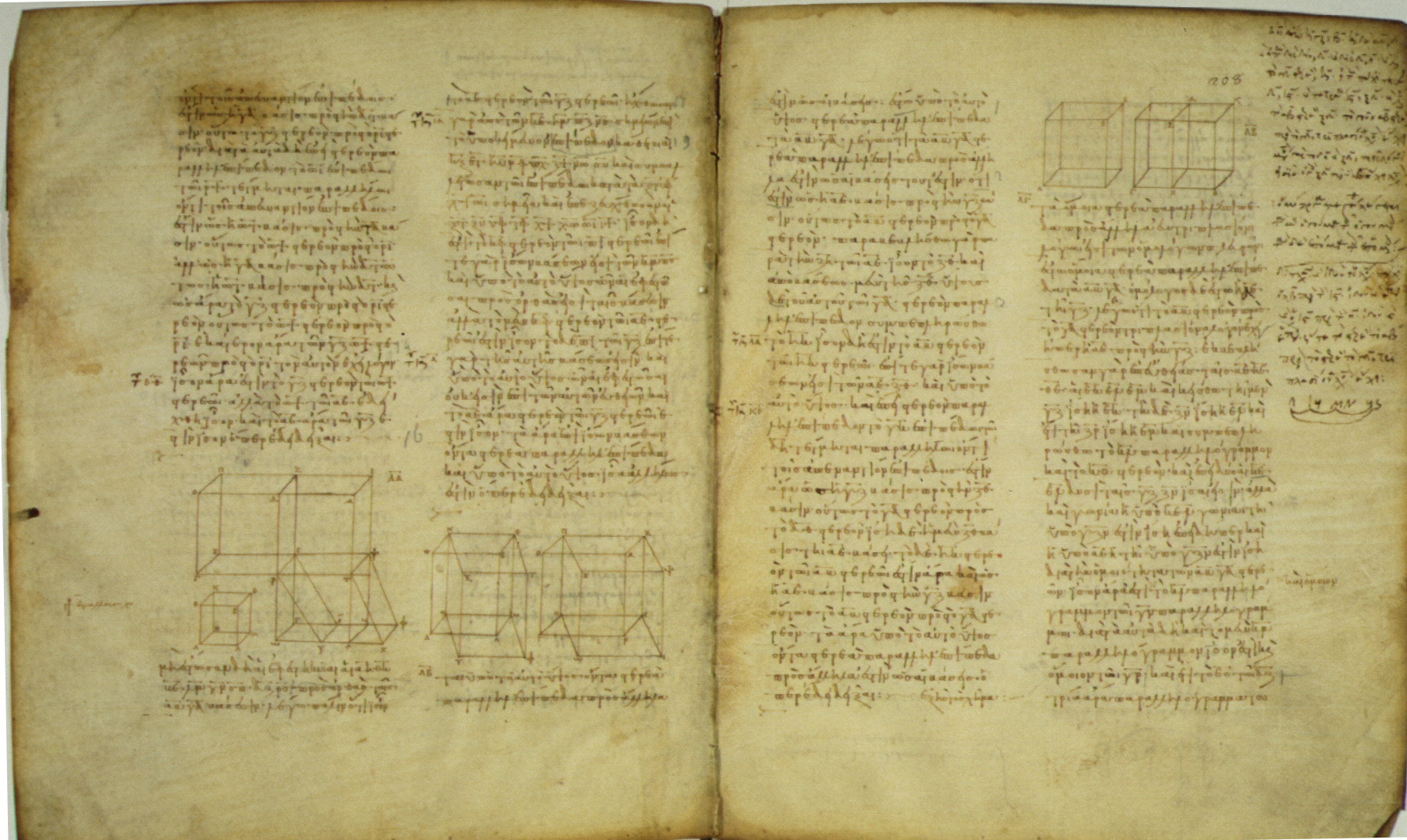 Netz has emphasized that the Greeks of antiquity used their diagrams in a much more topological manner than one might expect, and perspective seemed limited. Archimedes was silent on perspective in spheres and liked to refer to the great circle therein; instead of a sphere in a cylinder, Archimedes' tombstone might have merely been a circle in a square!

In more detail, although the scholars of the 19th and early 20th century were really good at reconstructing authoritative texts of the ancients, along with doing really boss things like dating the time of an author's flourishing to some throwaway line the author might make about an eclipse or comet, these same scholars had the tendency to amend the figures of Euclid/Archimedes/etc. to fit the standards of rigor of the 19th/early 20th century.

Netz is one of the first to note that figures are amenable to the critical, philological method, and thus to answer @Quuxplusone's and @Matt F's questions, even if there are no extant manuscripts (on papyri) in the hand of, say, Archimedes, by comparing and contrasting the manuscripts that are available, one may go back centuries, maybe a millennia, to Archimedes himself (or at least to the scribe at the library of Alexandria). One such manuscript was famously hidden behind a prayer book and lost to the world until rediscovered in a monastery outside of Jerusalem.

As an example of a critical reconstruction of a diagram, consider the figure below from On the Sphere and the Cylinder. $\mathrm{K}$ is a cone and each of the segments $\mathrm{AZ}$, $\mathrm{ZH}$, $\mathrm{HB}$ etc are lines (here showed as arcs). In one branch of the manuscript tree, the bottom $\mathrm{A}$ is missing, most likely due to scribal error. Because the text refers to line $\mathrm{AB}$, one of the copies on that branch added a line between the left $\mathrm{A}$ and the top $\mathrm{B}$, while also fixing the segments straight. But upon reading the proof, the line $\mathrm{AB}$ is intended to be the diameter.

Netz follows the philological principle of "lectio difficilior potior" - the more difficult a reading is, the more likely it is to be correct. Because the manuscript tree most likely branched off relatively early, e.g. in the early 1st millennium, Netz concludes from the study that, going back at least to antiquity and maybe to Archimedes himself, the figure had an $\mathrm{A}$ on the left and an additional $\mathrm{A}$ or maybe a $\mathrm{\Lambda}$ on the bottom, along with arcs for line segments. 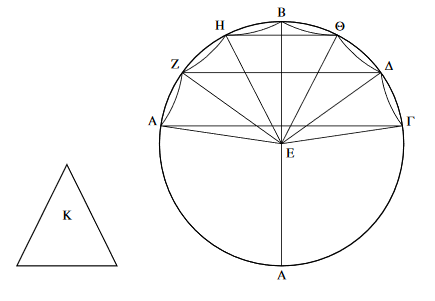 Netz discusses these in The Works of Archimedes: Volume 1, The Two Books On the Sphere and the Cylinder: Translation and Commentary 1st Edition, which is quite scholarly; he also has a popular book, The Archimedes Codex, with his coauthor William Noel, which provides figures available in the extant codices for the image above.

Below is a dodecahedron, dated to the 1st century, with faces labeled by the Greek alphabet. It's a figure from "A Dodecahedron of Rock Crystal from the Idaean Cave and Evidence for Divination in the Sacred Cave of Zeus," by Angelos Chaniotis. Here's a place to download the full article: https://archiv.ub.uni-heidelberg.de/propylaeumdok/1865/1/Chanotis_Dodecahedron_2006.pdf.

A cursory search shows that we have found at least a few handfuls of carved dodecahedra and icosahedra in Graeco-Roman Egypt. See https://www.metmuseum.org/art/collection/search/551072 for a nice icosahedron. So the Platonic solids were tangible objects a few centuries after Euclid. Scholarship on earlier dodecahedra and icosahedra gets a bit sketchy. As for diagrams, I'd stick with Fowler's uncertainty for now. 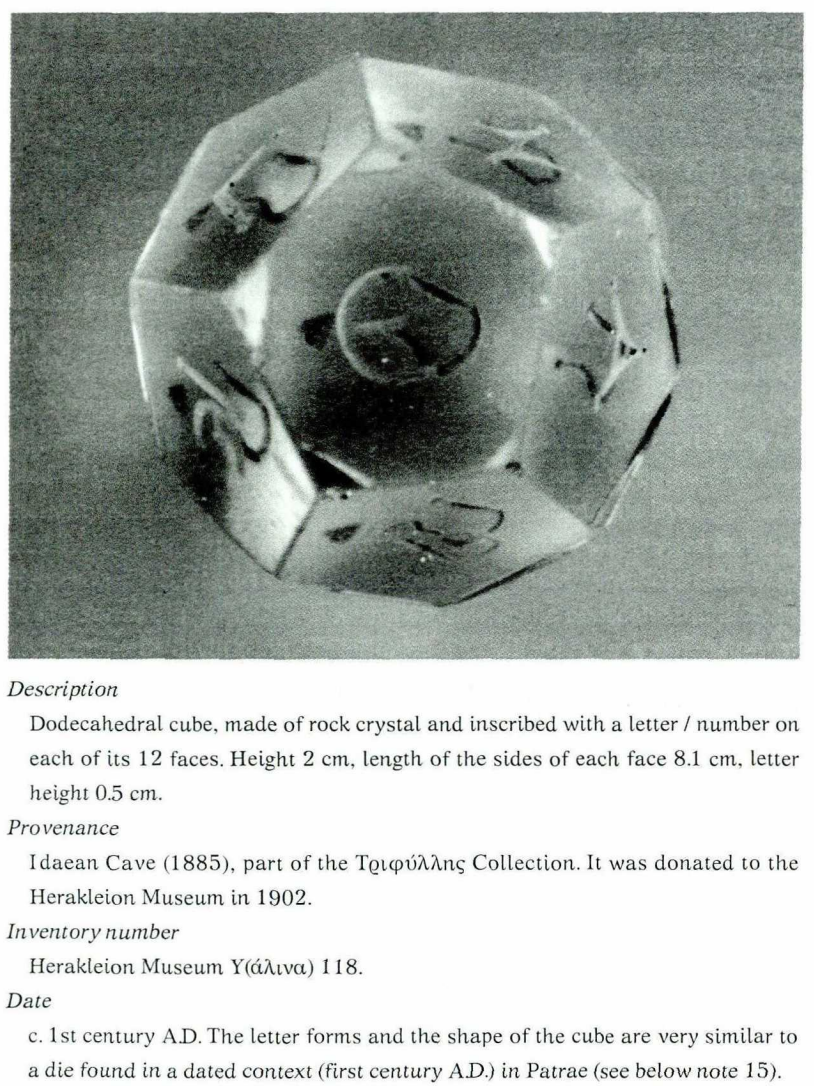 Not the answer you're looking for? Browse other questions tagged mg.metric-geometry ho.history-overview or ask your own question.

125
what mistakes did the Italian algebraic geometers actually make?
64
Did Gelfand's theory of commutative Banach algebras influence algebraic geometers?
24
Why and how did preschemes become schemes?
21
How did “Ore's Conjecture” become a conjecture?
4
Ancient method to study Archimedean spiral
32
Did ancient mathematicians know Euler's characteristic for convex polyhedra?
48
How did “normal” come to mean “perpendicular”?
8
What is the translation of this ancient Greek verb πυθαγοριζει
55
How did Lefschetz do mathematics without hands?
6
How did Hilbert prove the Nullstellensatz?
Question feed