Signature of a quadratic form

This may be a really dumb question, but here goes: is there any algorithm to compute the signature of a quadratic form (or a symmetric matrix, if you prefer) more efficient (asymptotically or otherwise) than actually computing the eigenvalues?

Gauss reduction gives you the answer. It writes, quite fast, the quadratic form $q$ as a sum $$\sum_ja_j\ell_j(x)^2$$ where the $\ell_j$'s are independent linear forms. The number of squares gives you the rank of $q$. The signs of the coefficients $a_j$ gives you the signature. I teach that in my undergraduate course in Algebra.

Remark that you cannot calculate the eigenvalues, at least in close form, because this is computing the roots of quite a general polynomial, and this is impossible in dimension $\ge5$.

Thursday morning. Noam has suggested that this is equivalent to performing Gram-Schmidt without normalization. That would explain why I could not find any explicit point where anyone wrote "Here is a way to reverse Hermite's type of method." I'm going to try some 2 by 2 and 3 by 3 examples, see if I understand.

Here are explicit example(s) as links, in this first one the form is indefinite;

(I) the identity matrix, except for the value $t$ at position $i,j$ in the upper triangle

(III) the identity matrix, except for the fixed value $1$ at a position in the lower triangle.

Oh, after doing several of these, I realized that a bunch of type (I) matrices with the extra off diagonal elements in the same row can be combined into one matrix, as such matrices commute with each other.

I had never seen it before, I asked about it at http://math.stackexchange.com/questions/1388421/reference-for-linear-algebra-books-that-teach-reverse-hermite-method-for-symmetr

In the most favorable cases, $P$ is also upper triangular. Not guaranteed. 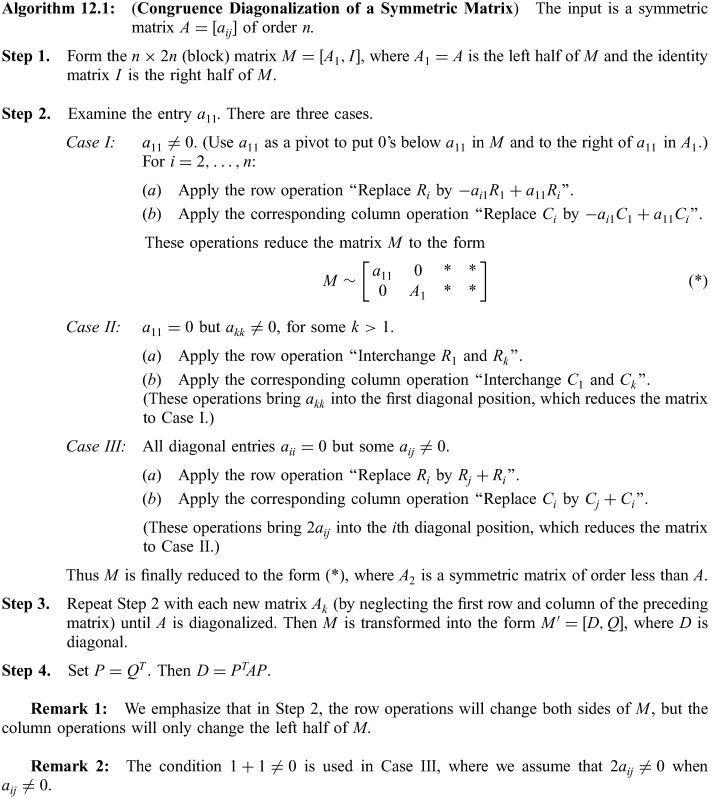 There's a large literature on "inertia revealing factorizations" for real or complex matrices. Usually one uses MA57 of the HSL implementation to compute the signature, which does an sparse $LDL^T$ factorization: http://www.hsl.rl.ac.uk/catalogue/ma57.html

Not the answer you're looking for? Browse other questions tagged linear-algebra or ask your own question.