I've recently been studying Riemannian geometry with goal of studying and doing research in Ricci flow, however, I've been noticing that a lot of work in Riemannian geometry seems to be done in curvature shortening flows. Now, most people are familiar with the power of Ricci flow – besides being essential in proving the Poincaré Conjecture and the Sphere Theorem, Ricci flow is in general very useful for uniformizing metrics on 3-dimensional manifolds, and is additionally finding new uses in higher dimensions.

First, because it is a beautiful subject. Second, because it seemed at the time (early 1980s) like a good warm-up to higher dimensional curvature flows.

UPDATE For a non-mathematical audience, see the results and references on the Carpenter's Rule Problem.

First, the curve-shortening process is quite beautiful in its own right: 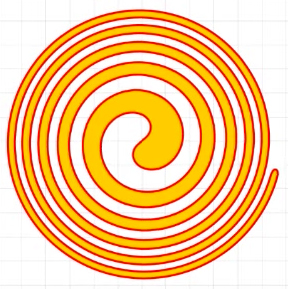 YouTube video showing self-intersection is avoided. Second, curve-shortening is a method for proving the existence of simple closed geodesics on a topological $2$-sphere. See The theorem of the three geodesics.
Share
Improve this answer
edited Apr 3 '17 at 22:30
answered Apr 3 '17 at 20:55

As Joseph O'Rourke said, curve-shortening flow can be used to prove the theorem of the three geodesics. If a simple closed curve on a Riemannian surface evolves by curve-shortening flow and does not collapse to a point in finite time, then it smoothly approaches a geodesic. This is a result of Grayson.

Curve-shortening flow can also be used in a really beautiful way to prove the isoperimetric inequality in two dimensions for closed embedded curves. This works more generally on Riemannian surfaces, but it's really neat and tidy for $\mathbb{R}^2$. Edit: Gage originally showed that the quantity $\frac{L^2}{4\pi A}$ is non-increasing with respect to this flow.

Consider a closed embedded initial curve $\gamma_0$ (which we give a positive orientation), and let $\gamma_t$ be the solution to curve-shortening flow. By the Gage-Hamilton-Grayson theorem, $\gamma_t$ remains embedded, is smooth, and shrinks to a round point in finite time, i.e. the curve becomes rounder as it shrinks to a point and "converges" to a circle in a suitable sense. This is truly a remarkable theorem if you look at the spiral posted by Joseph O'Rourke--it's not obvious that such a thing should unravel and become convex. It's also remarkable considering how finnicky and prone to singularities mean curvature flow and Ricci flow are (in higher dimensions at least).

Also, note that we may conclude that $L^2 = 4\pi A$ if and only if the curve is a circle. In the above calculation, we only applied Cauchy-Schwarz which is sharp exactly when $k$ is constant. For a closed embedded curve, this can only be a circle, by the fact that the curvature determines a curve up to isometry (fundamental theorem of planar curves).

You absolutely must consult the Wikipedia article on CSF.

Not the answer you're looking for? Browse other questions tagged soft-question riemannian-geometry or ask your own question.

10
Midpoint geodesic polygon / Birkhoff curve shortening
2
Geometry of Hopf fibrations and the fibration of Steifel Manfiolds over Grassmannians
10
How difficult will it be for me to switch fields (details below) after my Ph.D. in pure mathematics?
7
Why do we study complex orientable cohomology theories
5
Why do people study Weyl asymptotics and partial-spectral-projections?
Question feed