Is there a topological space X homeomorphic to the space of continuous functions from X to [0, 1]?

I know that computer scientists have constructed spaces $X$ such that $X$ is homeomorphic to $X^X$ in domain theory, but I don't know enough about it to tell whether the techniques are relevant here.

There is a lot of work on the nonconstructivity of Brouwer's fixed point theorem for different senses of constructivity. To give a quick visual proof that no continuous map of the type considered here exists, it is sufficient to consider a path through $[0,1]^{[0,1]}$ along which such a map cannot be continuously defined. Consider linearly deforming green to red to purple in the below diagram; a fixed point (i.e. a point where the curve crosses the identity depicted in blue) cannot be continuously chosen. 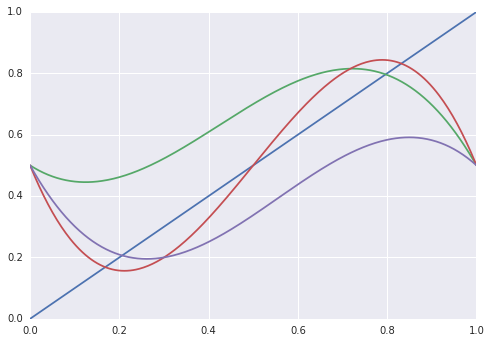 It's interesting that this works because we have a homeomorphism $X \cong [0,1]^X$ rather than just a continuous surjection. A continuous surjection $X \to [0,1]^X$ would be enough to deduce the intermediate value theorem using Lawvere's fixed point theorem, but not in a constructive enough way to similarly rule out.

Not the answer you're looking for? Browse other questions tagged gn.general-topology cartesian-closed-categories or ask your own question.

12
Is the Characteristic of a Field Detectable from the Topology of a Topological Vector Space?
77
Can the Lawvere fixed point theorem be used to prove the Brouwer fixed point theorem?
3
Fixed point property for intersection of spaces which are homeomorphic to a disk
13
Avoiding countable subgroups of a group homeomorphic to the Cantor space
35
Is there a "universal" connected compact metric space?
12
Is there a computable homeomorphism between two different Cartesian powers of the computable real numbers?
7
Analogue of Urysohn metrization for Lawvere metric spaces?
6
Is each Parovichenko compact space homeomorphic to the remainder of a soft compactification of $\mathbb N$?
16
Compact manifold $X$ having fixed-point property but $X\times X$ does not
7
About a generalization of the Borsuk-Ulam theorem
Question feed