If my thinking is wrong please let me know. I have little knowledge on beyond-college physics.

For research purposes, I read a few introductions to these three formalisms of classical mechanics [1,2,part of 5](Hamiltonian, Lagrangian and Newton formalism).

As Ben and Tobias pointed out in their answers, these three formalisms are equivalent their relationship are not simply inclusion but complementary. There are situations one of three systems that are particularly suitable to use.

For my purposes, I see there often seems to be one-to-one correspondence in-between Lagrangian construction and Hamiltonian construction for dynamic systems(OR in the simpler case the derived differential equations w.r.t. a chosen coordinate frame) and (sympletic) geometry when the concern is the dynamics on the manifold, say [3,4].

A curious question in my mind is that if these two physical formalisms are equivalent, then why only Hamiltonian is studied in most cases(say geometric analysis and sympletic geometry)?

(1)What is its(The Hamiltonian formalism) superiority over Lagrangian from mathematical perspective? Does it lead to a richer structure or more natural structure?(by structure I mean manifold structure over which the system is defined)

(2)Moreover, is there any example that is easily formalized in Hamiltonian formalism but too complicated/unnatural to formalize in Lagrangian?

Any comments or reference is appreciated! Please add some reference in your answer to support your claims, thanks a lot!

[4]Koon, Wang Sang, and Jerrold E. Marsden. "The Hamiltonian and Lagrangian approaches to the dynamics of nonholonomic systems." Reports on Mathematical Physics 40.1 (1997): 21-62.

And as for my motivation, I primarily want to figure out why [Mumford&Michor] proposed Hamiltonian approach in (which looks not quite natural to me at first since they are just laying down a framework for dynamics on $Cur(\mathbb{R}^2)$.)

[Mumford&Michor]Michor, Peter W., and David Mumford. "An overview of the Riemannian metrics on spaces of curves using the Hamiltonian approach." Applied and Computational Harmonic Analysis 23.1 (2007): 74-113.

From these nice answers below, I feel that the most convincing reason why Hamiltonian approach is preferred in [Mumford&Michor] is that (1)the space of curves $Cur$ involves $\mathrm{Diff}(C)$ and Hamiltonian formalism is a convenient formalism to incorporate these transformations. (2)And the infinitesimal generators of $\mathrm{Diff}(C)$ can be used to describe the velocity field along the curves in $Cur$. (3)Combined with Tobias' answer, [Mumford&Michor] also said symmetry is a reason for Hamiltonian. Now I understand the sentence better.

...The Hamiltonian approach also provides a mechanism for converting symmetries of the underlying Riemannian manifold into conserved quantities, the momenta.[Mumford&Michor]

(Unless the authors disagree :)

Thanks again for everyone's input, I learnt a lot from you and willing to learn more!

Each of the different formalism of classical mechanics has its advantages and disadvantages. However, in the end all three frameworks tend to be equivalent, and thus the following list is very subjective and there may be exceptions to all points.

The three formalisms of classical mechanics, i.e. the Newtonian, the Lagrangian (analytical mechanics) and the Hamiltonian (canonical formalism) are generally not equivalent to each other -at least not in some strict sense of the word "equivalent" which could be considered valid for the totality of physical systems. But in fact they are, for lots of systems of interest. In order to be more specific, let me try to sketch their logical interconnections:

$\blacktriangleright$ If we start from Newtonian mechanics and the assumptions: 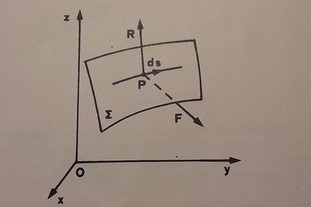 If the constraints are scleronomic then the actual displacements $d\mathbf{s}$ are virtual displacements $\delta\mathbf{s}$.
($\Sigma$ is the hypersurface determined by the constraints $f(x,y,z)=0$, $\ R \ $ the constraint force, $F$
is the resultant non-constraint force and $\mathbf{s}$ the position vector).
then Newton's $2^{nd}$ law is equivalent to the D'Alembert's principle which in turn implies the Euler-Lagrange's equations of motion i.e. the analytical mechanics formalism.
(Note that, systems sattisfying the second of the above assumptions are sometimes called "mechanical" or "pure mechanical" systems in the literature.
On the other hand, one does not have to go far in order to find systems violating one or both of the above assumptions: rolling without slipping is a common system with non-holonomic constraints and generally systems with resistance forces -various friction forces for example- violate the second of the above assumptions).

The converse implication, that is starting from the Euler-Lagrange equations and deriving D'Alembert's principle and thus Newton's $2^{nd}$ law is relatively straightforward.

$\blacktriangleright$ If we start from a Lagrangian and its Euler-Lagrange equations of motion, under the assumptions:

then we can derive the Hamiltonian and the canonical formalism of Hamilton's equations through a Legendre transformation. Note that Legendre's transformation, transforms functions on a vector space to functions on the dual space. In this case, it transforms the Lagrangian function (on the tangent bundle of the configuration space manifold) to the Hamiltonian function (on the cotangent bundle of the configuration space manifold).

Now, regarding your first question: I don't think it would be suitable to speak about "superiority" or "richer structure". From a technical aspect, Euler-Lagrange's equations are a system of $n$, second order, ODE and the Lagrangian function involved "lives" on the tangent bundle while The Hamiltonian formulation comprises of a system of $2n$, first order, ODE, involving the Hamiltonian function which "lives" on the cotangent bundle (of the configuration space manifold).
If we consider the passage to quantum mechanics, then both formalisms are suitable to handle the elementary aspects of the quantisation problem (at both levels, first and second quantization as well): Hamilton's equations have almost the same typical form in quantum mechanics with their classical counterparts, although their interpretation is quite different in the quantum case -but this is an apparently different story. The road to quantisation through the hamiltonian formalism is generally refered to as canonical quantisation while the road through Lagrangian formalism is known as path integral quantization.

Regarding your second question, and since you are asking for references, this article appears to discuss examples of classical Hamiltonian systems possessing no Lagrangian formulation. On the other hand, the Hamiltonian and the Lagrangian formulation of geometrical optics -as has already been mentioned in another answer- is a well known classical system possessing no meaningful description at the level of Newton's laws.
From one point of view, one may say that the Hamiltonian formalism is "wider" in the sense that it includes several systems of ODE not being directly or obviously related to classical mechanics (an example is the lagrangian/hamiltonian description of Maxwell's laws of the electromagnetic field) or to physics at all. In practise, the hamiltonian is frequently considered to be some abstract function while the Lagrangian is more intimately related to the concepts of kinetic and potential energy of some system. I think that you might also find some interest in the article Classical Mechanics Is Lagrangian; It Is Not Hamiltonian by Erik Curiel.
However, from another point of view, Newtonian formulation is "wider", in the sense that if one is to consider, frictions, dissipative forces, non-holonomic constraints etc then -although there are various formal generalizations of Lagrange's and Hamilton's equations in order to deal with such systems- usually one turns to the fundamentals that is Newton's laws.
So, concluding, i agree that there are no simple proper subset relationships between these three formulations of classical mechanics.

are invaluable -imo- sources, delving into the foundations, not trying to hide the pitfalls under the carpet, with an eye on details (either in the computations or the arguments).

P.S.: One last thing: the above disussion and the diagram provided, aimed at emphasizing the logical interconnections of these three formalisms and the usual assumptions upon which one is being derived from or imply the other(s). However, it should be noted that both the Euler-Lagrange's and the Hamilton's equations, can be derived -each one of them seperately and independently of Newton's laws- in an "axiomatic" (or should I say "ad hoc" ?) manner through suitable variational principles: these are the Hamilton's principle (from which euler-lagrange's eqs are derived) and the modified Hamilton's principle (from which the canonical eqs of hamiltonian mechanics can be derived). They both determine the corresponding equations of motion and thus the evolution of the system, through the demand that the trajectories are such that the corresponding action-functional $S$ gets a stationary value (its $\delta$-variation becomes zero): $$\delta S=0$$ In the former case $S=\int_{t_1}^{t_2} Ldt$ and the principle is applied in the configuration space, while in the later case $S=\int_{t_1}^{t_2} (\dot{q}p-H)dt$ and the corresponding principle is applied in the phase space.

This part is not correct. The Newton, Hamilton, and Lagrangian formulations are all classical, and they are all essentially equivalent. None of them is a generalization of any of the others. Given a description of any classical system in one of these systems, you can normally find its description in the other systems. (There are cases of systems that can be described in one of these formalisms but not another, e.g., optics can be described in the Hamiltonian formalism but not using Newton's laws. But I don't think any of these are simple proper-subset relationships.)

Hamiltonian and Lagrangian mechanics are not descriptions of a quantum-mechanical system. The classical description of a system can often be converted into such a description, using various heuristic recipes such as canonical quantization. Sometimes these methods of quantization fail (as with quantum gravity), and sometimes they are ambiguous or need creative tweaking.

One reason that the Lagrangian formalism is nice is that the Lagrangian transforms relativistically as a scalar, so that by specifying a Lagrangian, we are guaranteed to get equations of motion that are coordinate-independent. This is different from the Hamiltonian approach, in which time has a special status, setting it apart from the spatial coordinates.

In response to (1), a key advantage of Hamilton's equations of motion is that they remain invariant under a large class of "canonical" transformations, $(x,p)\mapsto (Q(x,p),P(x,p))$ for some scalar function $S(x,P)$, in which both coordinates and momenta are transformed. For the Lagrange equations of motion only coordinate transformations, $x\mapsto Q(x)$, are allowed. This larger freedom exists because phase space has twice the number of dimensions of configuration space. One way to use this extra freedom is to find conservation laws, $\dot{Q}=0$, by searching for a canonical transformation with vanishing Poisson bracket $\{Q,H\}=0$.

49
are there natural examples of classical mechanics that happens on a symplectic manifold that isn't a cotangent bundle?
9
When does a Lagrangian dynamical system have an equivalent Hamiltonian description?
4
Boundary conditions and the relationship between Hamiltonian and Lagrangian Floer theories