It is easy to show that $n$ (mutually different) circles on the plane can have maximum $n(n-1)$ intersection points. In our optimal graph drawing research we have encountered a counterpart of this result. For a natural number $n$ let $c_3(n)$ denotes the maximum number of triple intersection points of $n$ (mutually different) circles on the plane. (A point is a triple intersection point if in belongs to at least three circles of the family). This problem looks natural and simple, so it should be already known. Thus I tried to google for it. Surprisingly, I found nothing, hence I decided to ask here for a reference.

We can easily show that $c_3(n)\le n(n-1)/3$, by counting intersection points (there are at most $n(n-1)$ of them) taking into account their multiplicity (each triple intersection point needs at least there of them) and maybe the value of $c_3(n)$ is asymptotically close to this upper bound. But for our applications we are mainly interested in upper bounds for small values of $n\le 10$. For instance, the following pictures combined with the above upper bound shows that $c_3(5)=6$, $8\le c_3(6)\le 10$, and $12\le c_3(7)\le 14$. 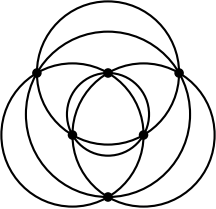 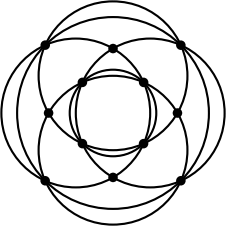 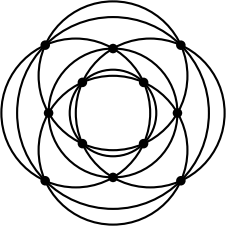 Not the answer you're looking for? Browse other questions tagged reference-request discrete-geometry or ask your own question.

4
Can $n$ circles on a plane generate $m$ intersection points where at least $k$ circles intersect?

27
How fast are a ruler and compass?
8
Erdos-Szekeres in high dimensions
11
Numbers of intersection points and lines
4
Orchard-planting problem in space
4
Can $n$ circles on a plane generate $m$ intersection points where at least $k$ circles intersect?
40
Four circles on the sphere
5
How many squares can be formed by $n$ points in general position in the plane?
5
On circles and ellipses drawn on an infinite planar square lattice
2
Pairwise intersecting circles in the plane
Question feed