Correspondence between coverings and field extensions

I am self reading from Groups as Galois Group by Helmut Volklein There is a result on page 94(section 5.4)

Is there similar theorem(result) that states the correspondence between field extensions of $\mathbb{Q}(T)$ and coverings of $P^{1}_{Q}$.

Why I think there is such result

He also mentions the same idea, He has written the statement but I want to convince myself (mathematically by a proof) that it is actually true. 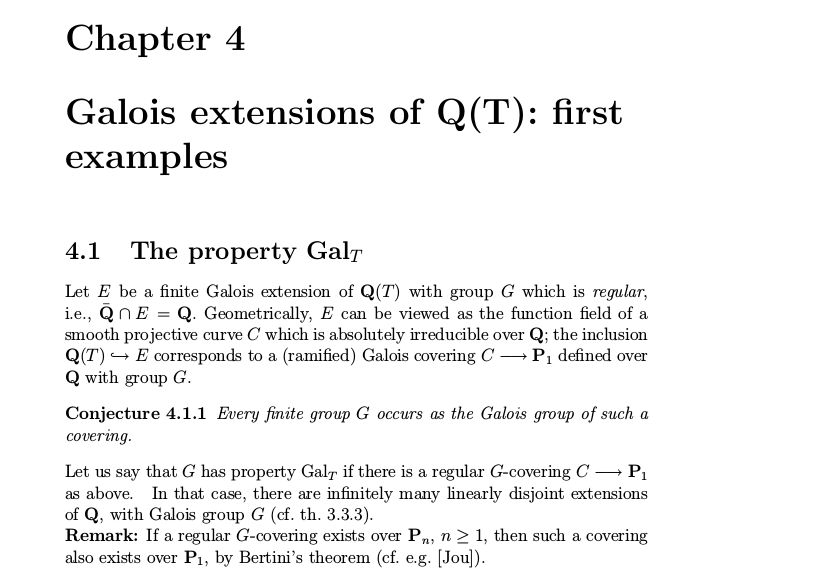 Not the answer you're looking for? Browse other questions tagged ag.algebraic-geometry at.algebraic-topology galois-theory or ask your own question.

16
Connection between isomorphisms of algebraic topology and class field theory
8
Group Extensions and Line Bundles on $BG$
24
Is there a Galois correspondence for ring extensions?
1
Is the other extreme of Hilbert Irreducibility true?
15
What is the relation between L. Lafforgue and Frenkel-Gaitsgory-Vilonen results on Langlands correspondence ?
7
Incomplete Failures of the Inverse Galois Problem
0
Inverse Galois Problem ; Galois group of some branched cover of $P^{1}$ defined over $\mathbb{Q}$
1
Galois extensions of ring spectra and subextensions
Question feed