It is well-known that the volume of a regular tetrahedron cannot be dissected to the volume of a cube, because their Dehn invariants differ. But their surfaces have a dissection, by applying the Boyai-Gerwien theorem. Applying that theorem in one way (among several options) leads to an $31$-piece dissection (if I calculated correctly), illustrated below. But this is surely very far from optimal (and hardly aesthetically pleasing). Likely the question has been explored, but I have not found any literature. It could make a pleasing contrast to the impossibility of a volume dissection. 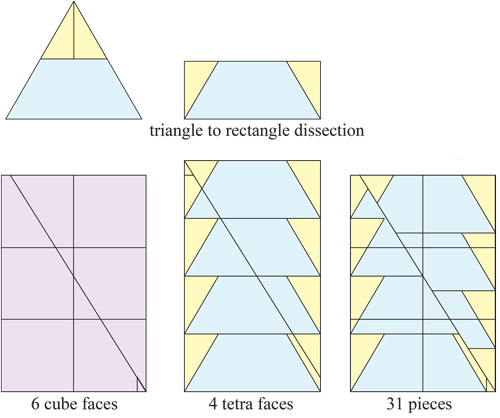 Related: "Covering a Cube with a Square."

If folding is allowed, there is a 5 piece dissection: 3 pieces to reshape the rectangle from tetrahedral to cubical, plus two more pieces to arrange the latter into an arrangement that folds around a cube.

Start by cutting a tetrahedron along two disjoint edges plus an altitude of any face such that the altitude is perpendicular to one of the cut edges (and thus shares a vertex with the other cut edge). One unfolds to get a rectangle roughly 1.6 by 3.7. Now cut this into three pieces similar to the example in the question to get a 2 by 3 rectangle. If I am not mistaken, there is room in the corner of each large piece to cut out a unit square. The resulting 5 pieces can be folded around a unit cube.

Even if you have to cut the rectangle further to get the individual faces, I think one gets fewer than 20 pieces with this method.

Edit 2017.02.28 GRP : Here is my next attempt at explaining by picture. I hope it shows how a five piece folding dissection is achieved. Unfortunately, this version does not improve much on a 31 piece unfolded dissection. 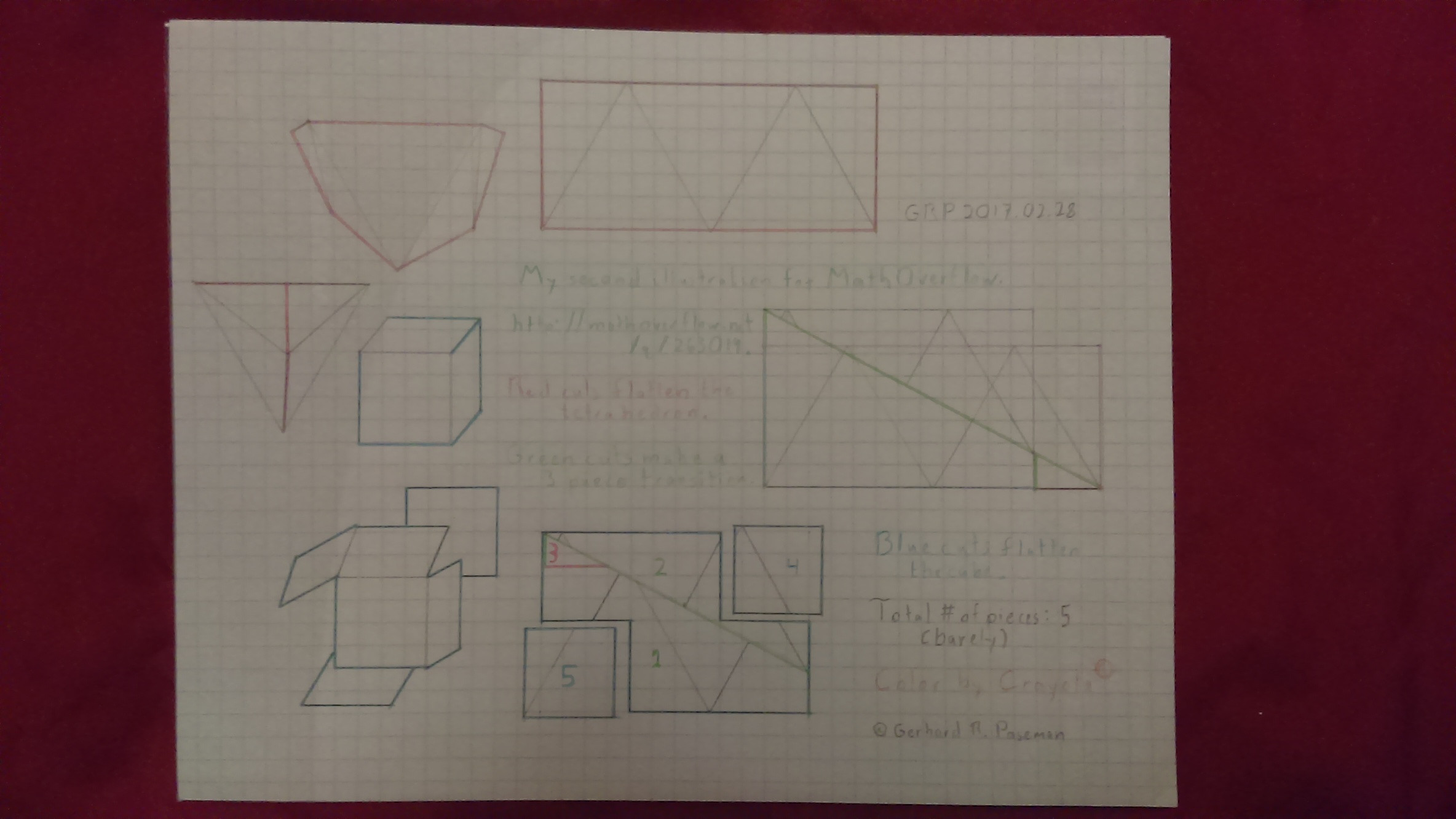 I think a good solution starts with rearranging two triangles into a 3 by 1 rectangle of the same area. In particular, start symmetrically: find the center $C$ of the rectangle, and align one of the triangles so it has an edge aligned with side of length 3 and $C$ is on its perimeter. Do a $180^\circ$ rotation to align the other triangle similarly. You now have the center square decomposed in 2 pieces, and a large portion of a triangle devoted to one of the remaining squares.

[![GPTetraCube1][1]][1]
(Added by JORourke.) You now have the problem of rearranging two triangular pieces into the gap in the unfilled portion of the square which is a right triangular piece of similar shape. I suspect this corner portion can be done with 5 or fewer pieces, given a total for this half of 14, assuming the rectangle needs to be cut.

You can also offset this construction slightly, getting rid of one of the triangle snippets by covering it with the rectangle. This might reduce the piece count a bit.

Edit 2017.02.25 GRP Here is my first attempt at including an image representing part of the dissection. The main task is to assemble right triangle MNO from an equilateral triangle with one vertex at M and a snippet outside of MNO but sharing a vertex with O. I've started such a process, but I believe Joseph knows a more efficient way. Enjoy the picture. 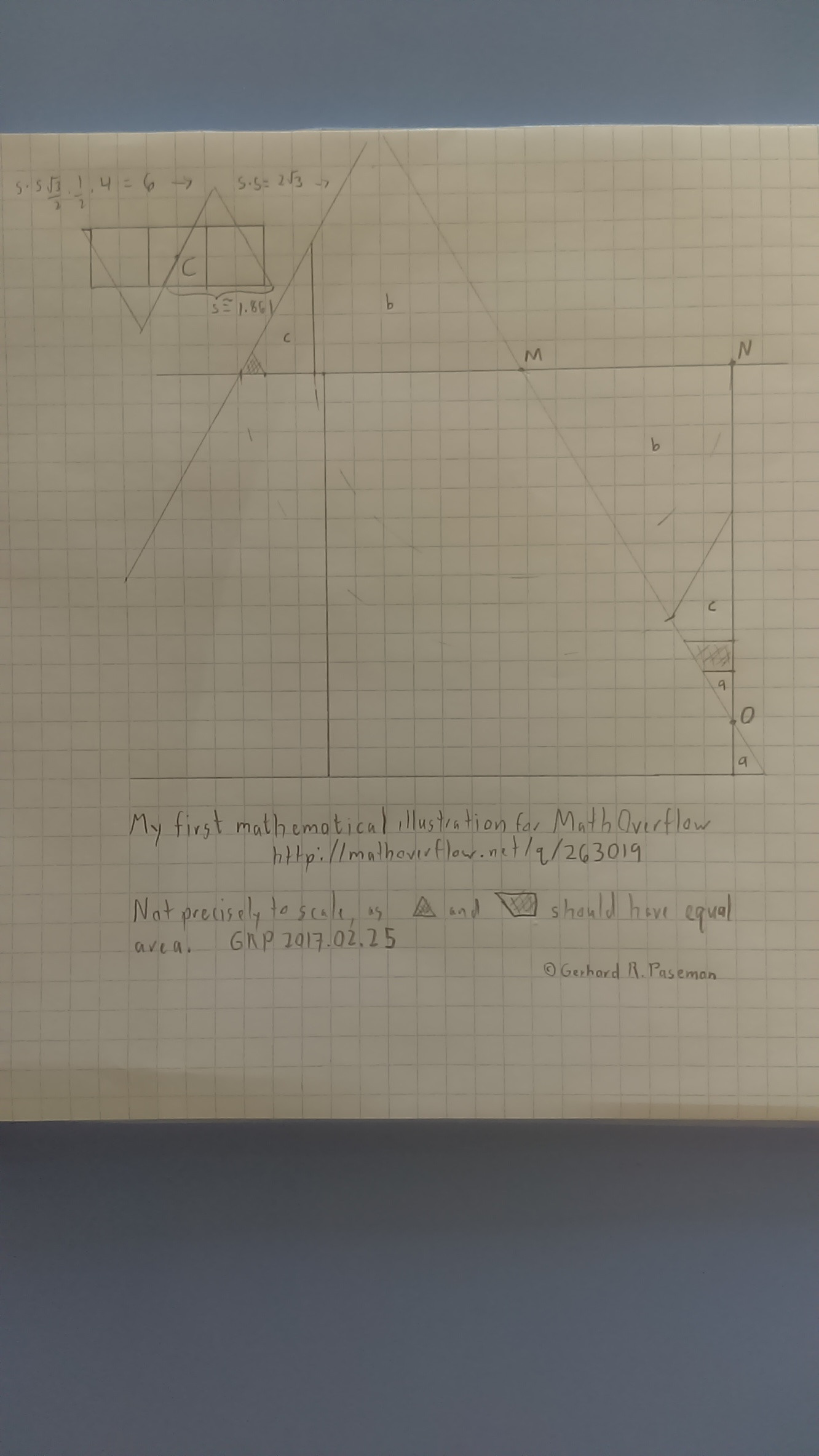 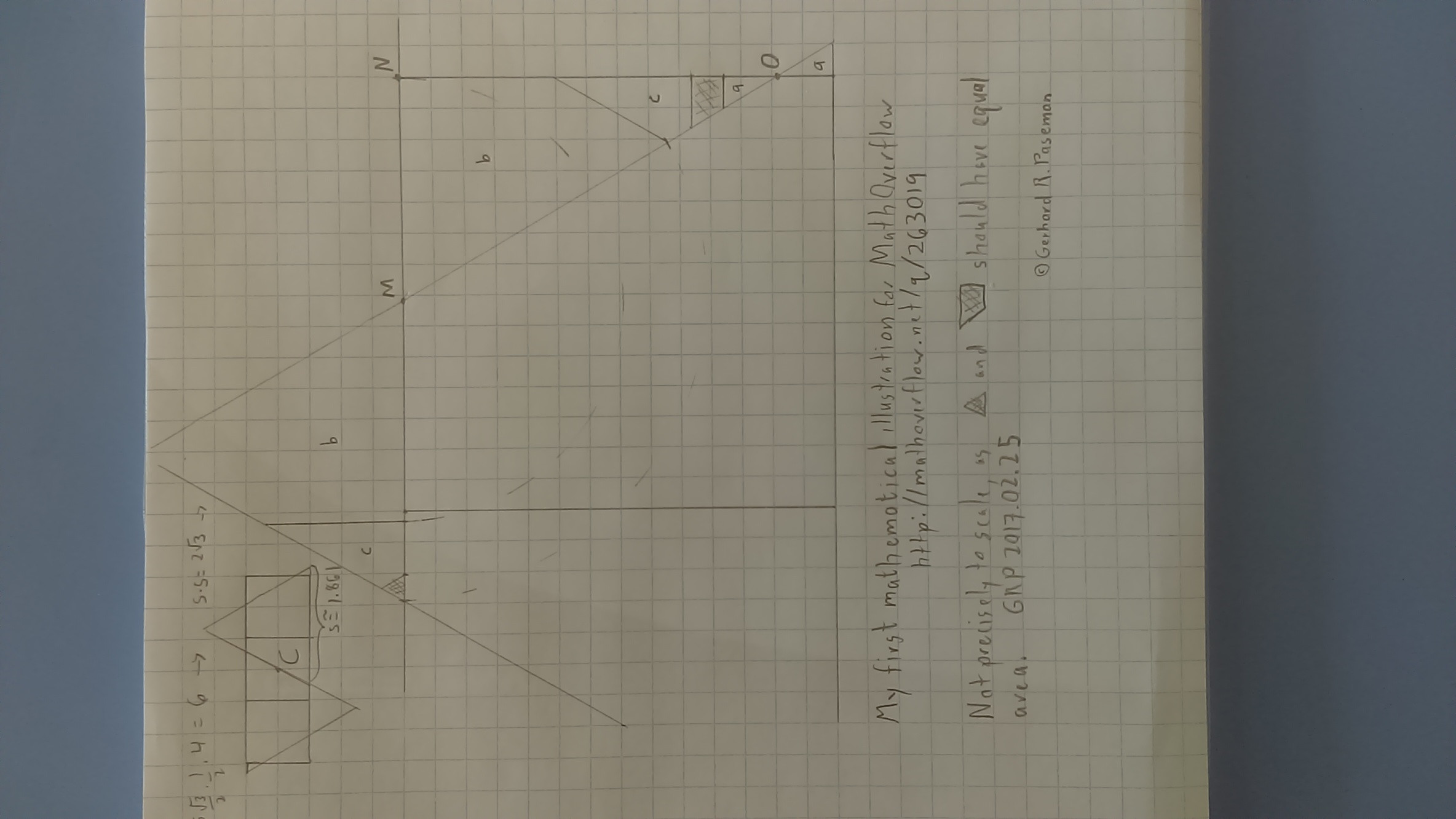 Here is a dissection based on Gerhard's latest idea. I didn't add this directly to his post because it is not identical to his $5$-piece dissection from unfoldings. 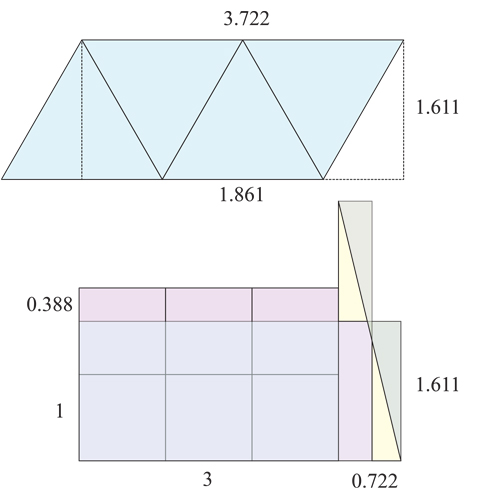 This appears to be $5$ pieces to form the $3.722 \times 1.611$ rectangle from the cube's two $3 \times 1$ rectangles. I consider this a solution, starting from surface unfoldings, and have accepted Gerhard's answer.

Not the answer you're looking for? Browse other questions tagged mg.metric-geometry euclidean-geometry or ask your own question.

24
Covering a Cube with a Square

18
Is a rhombus rigid on a sphere or torus? And generalizations
16
Optimal 8-vertex isoperimetric polyhedron?
6
Surface area of superellipsoid (dice)
14
Ratio of circumscribed/inscribed $(n{-}1)$-gons
24
Covering a Cube with a Square
14
Smallest regular simplex containing the unit cube in $R^n$
24
Tetrahedron insphere iteration
7
How to find a tetrahedron that covers four points?
11
Book on the tetrahedron
9
Packing regular tetrahedra of edge length 1 with a vertex at the origin in a unit sphere
Question feed