A roadmap to Hairer's theory for taming infinities

Martin Hairer gave recently some beautiful lectures in Israel on "taming infinities," namely on finding a mathematical theory that supports the highly successful computations from quantum field theory in physics.

(Here are slides of a similar talk at Heidelberg. and a video of a related talk at UC Santa Cruz.)

I think that a relevant paper where Hairer's theory is developed is : A theory of regularity structures along with later papers with several coauthors.

Quantum field theory computations represent one of the few most important scientific successes of the 20th century (or all times, if you wish) and allow extremely good experimental predictions. They have the feature that computations are based on computing the first terms in a divergent series, and a rigorous mathematical framework for them is still lacking. This issue is sometimes referred to as the problem of infinities.

Here is one relevant slide from Hairer's lecture about the problem. 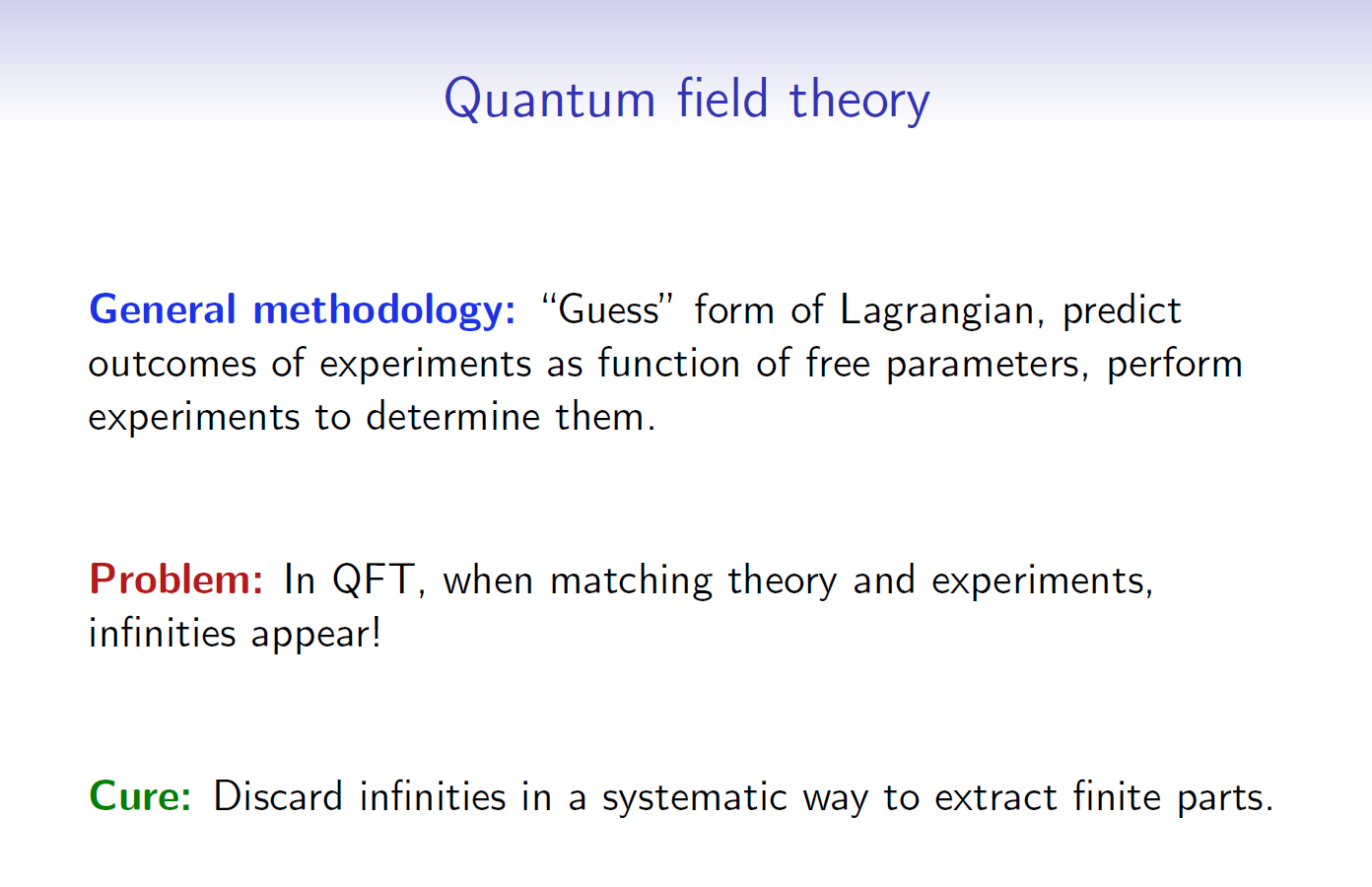 And here is a slide about Hairer's theory. 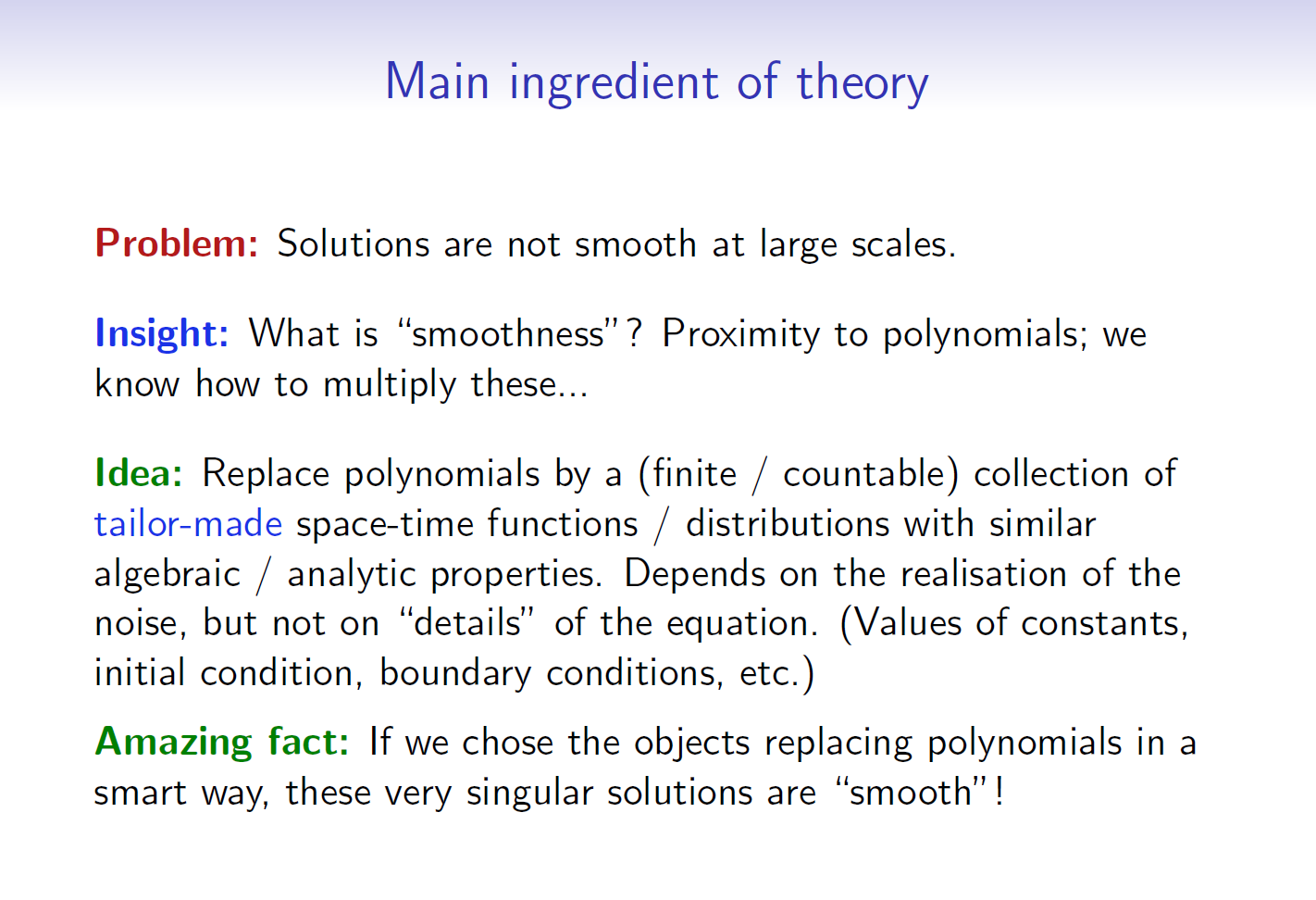 1) What are these tailor-made space-time functions?

3) Can the amazing fact be described/explained in little more details?

4) In what ways, does the theory provides a rigorous mathematical framework for renaormalization and to physics' computations in quantum field theory.

5) How is Hairer's theory compared/related to other mathematical approaches for this issue. (Renormalization group, computations in quantum field theory, etc.)

Let me try to expand a little bit on Ofer's answer, in particular on points 1-3.

These functions (or rather distributions in general) are essentially the multilinear functionals of the driving noise that appear when one looks at the corresponding Picard iteration. For example, if we consider the equation (formally) given by $$\partial_t \Phi = \Delta \Phi - \Phi^3 + \xi,\tag{$*$}$$ write $P$ for the heat kernel, and write $X$ for one of the space-time coordinate functions, then we would try to locally expand the solution as a linear combination of the functions / distributions $1$, $X$, $P \star \xi$, $P\star (P\star \xi)^2$, $P\star (P\star \xi)^3$, $P\star (X\cdot (P\star \xi)^2)$, etc. The squares / cubes appearing here are of course ill-defined as soon as $d \ge 2$, so that one has to give them a suitable meaning.

Each of these distributions naturally comes with a degree according to the rule that $\deg \xi = -{d + 2\over 2}$, $\deg (P\star \tau) = \deg \tau + 2$, and the degree is additive for products. One then remarks that, given any space-time point $z_0$ and any of these distributions, we can subtract a (generically unique) $z_0$-dependent linear combination of distributions of lower degree, so that the resulting distribution behaves near $z_0$ in a way that reflects its degree, just like what we do with the usual Taylor polynomials. To be consistent with existing notation, let's denote by $\Pi_{z_0}$ this recentering procedure, so for example $(\Pi_{z_0} X)(z) = z-z_0$. In our example, $\Pi_{z_0} \tau$ will be self-similar of degree $\deg \tau$ when zooming in around $z_0$.

Regarding the role of the noise, I already alluded to the fact that the squares / cubes / etc appearing in these expressions may be ill-posed, so that if you start with an arbitrary space-time distribution $\xi$ of (parabolic) regularity $-{d+2\over 2}$, there is simply no canonical way to define $(P\star \xi)^2$ as soon as $d \ge 2$. There is a general theorem saying that there is always a consistent way of defining these objects, yielding a solution theory for which all I said above is true, but this is not very satisfactory since it relies on many arbitrary choices. (In the case $d=2$ it relies on the choice of two arbitrary distributions with certain regularity properties, and quite a bit more in dimension $3$.) If however $\xi$ is a stationary generalised random field then, under rather mild assumptions, there is a way of defining these objects which is "almost canonical" in the sense that the freedom in the construction boils down to finitely many constants, as recently shown in https://arxiv.org/abs/1612.08138.

Let me comment on points 4) and 5). The problem with infinities in QFT or traditional equilibrium statistical field theory is related to the one addressed by Martin's theory but there are some differences. For concreteness let me talk about the $\phi^4$ model only. Mathematically, the problem it poses is to make sense of the probability measure $$ \frac{1}{\mathcal{Z}}\exp\left( -\int_{\mathbb{R}^d}\{ \frac{1}{2} (\nabla\phi)^2(x)+\mu \phi(x)^2+g\phi(x)^{4} \} d^dx \right)\ D\phi $$ on the "space of all functions" $\phi:\mathbb{R}^d\rightarrow\mathbb{R}$. This is the kind of heuristic formulas one finds in physics QFT textbooks. The symbol $D\phi$ stands for Lebesgue measure on this space of functions and $\mathcal{Z}$ is a normalization constant so the full space has measure one as befits a probability measure. Now let's turn this into a well posed mathematical question.

Problem: Find an explicit parametrization of all weak limits (of probability measures on $S'(\mathbb{R}^d)$) given by $\lim_{r\rightarrow-\infty}\lim_{s\rightarrow\infty}\nu_{r,s}$ for all possible choices of bare ansatz $(\alpha_r,\mu_r,g_r)_{r\in\mathbb{Z}}$.

What renormalization theory in physics also tells us is that although it seems one has a hugely infinite-dimensional amount of freedom in choosing the sequence $(\alpha_r,\mu_r,g_r)_{r\in\mathbb{Z}}$, the set $\mathscr{T}$ of weak limit points is a finite-dimensional variety. For $d=3$, one expects three parameters or "renormalized coupling constants" $(\alpha_{\rm R},\mu_{\rm R},g_{\rm R})$ suffice. One can even get rid of $\alpha_{\rm R}$ if one quotients by taking constant multiples of the random field $\phi$.

There are rigorous renormalization group techniques for constructing portions of $\mathscr{T}$. Kupiainen's work mentioned by Ofer is an adaptation of these techniques to the time-dependent rough SPDE setting. The above is what I call the non-anchored Gibbsian way of trying to construct elements $\nu\in\mathscr{T}$. There is a completely different approach which I call the anchored stochastic quantization approach. There one need to make sense of the SPDE in Martin's answer, which he did locally in time. Then one needs to understand this SPDE globally in time and construct an invariant measure which gives $\nu\in\mathscr{T}$. This is also fraught with difficulties but there has been quite a bit of progress in this direction (see, e.g., this article related to invariant measures and Martin's comment below). The key difference between the two approches is that in the non-anchored setting one does not have a fixed probability space to work with. In the second anchored situation one does since all fields are functionals of the driving noise. In the anchored setting, $L^2$ estimates involving second moments only are enough to prove convergence in probability and thus in law for the random fields of interest. In the non-anchored situation one needs to control all moments (correlation functions) with uniform $n!$ bounds on these moments.

It is hard to say more as an MO answer, but you can see these papers for further explanations:

Before reading these articles it may helpful to consult the slides of my recent Colloquium talk "A Toy Model for Three-Dimensional Conformal Probability". They should be much easier to follow since they contain lots of pictures.

The article in bullet point 1) provides an alternate way of defining pointwise products of random distributions (like $\phi^2$ and $\phi^4$ above) using Wilson's operator product expansion (OPE). Regarding 5) in the OP's question, I believe it would be of great interest to prove that the moments of the solution $\Phi$ constructed by Martin satisfy the (dynamical version) of Wilson's OPE, and then compare $\Phi^3$ obtained by the theory of regularity structures with the one constructed (from the OPE) in my 2nd quantized KC paper.

Update (Jan 27, 2018): The article by Mourrat and Weber mentioned by Martin in his comment below has now appeared in CMP, see here. It provides a new construction of the scalar $\phi^4$ model in three dimensions, in finite volume.

Update (Jan 21, 2019): Progress in the area has been quite fast and, since my last update, the limitation to finite volume has been overcome as mentioned in Martin's comment below. For the infinite volume treatment of $\phi_3^4$ via the stochastic quantization method see this article by Gubinelli and Hofmanová (with the paracontrolled approach) and the one by Moinat and Weber mentioned below (with the regularity structures approach).

There are several treatments of Hairer's theory, including lecture notes of his that try to give the "big picture".

Brief answers to some of your questions:

1) Those are the solutions to the underlying linear equation, as well as certain products and integrals that show up in the expansion of the nonlinear equation. For example, one such term will be the integral of the (linear) solution against the noise.

2) In Hairer's theory (and in its precursor, Lyons' rough path theory), noise is viewed as having certain pathwise properties. The point however is not just to look at it as a path but also as it interacts with higher order nonlinearities, essentially multiple integrals of the noise - these are kept in addition to the path of the noise as basic data. Once you do that, probability essentially disappears, and the fact that it is "noise" does not play any role. The fact that you started with noise is used in showing that almost surely, these nonlinear expressions exist and have good properties.

3) I think that the lecture notes of Friz and Hairer do exactly that. I am not sure how to do it in a MO post, maybe someone else (or Martin himself?) can. In a nutshell, when you expand your solution in terms of the objects in item 2), that is you write it as a linear combination with local coefficients, then: a) the difference is actually a regular function in space-time (in the usual sense: Holder), and b) the coefficients themselves transform nicely when you move from one point in space time to another.

4+5) There is a paper of Kupiainen https://arxiv.org/pdf/1410.3094.pdf where he solves the $\phi_3^4$ equation by RG techniques. He stresses that the equations that Hairer solves, including this one, are "super-renormalizable" (ie, that the perturbation strength vanishes in small scales). Look also for follow up work with Marcozzi. There has also been work on other approaches (Gubinelli, Imkeller, Perkowski) using paracontrolled distributions.

Not the answer you're looking for? Browse other questions tagged pr.probability mp.mathematical-physics schwartz-distributions or ask your own question.

103
What notions are used but not clearly defined in modern mathematics?
53
Why is Quantum Field Theory so topological?
65
Mathematics of path integral: state of the art
31
What mathematical treatment is there on the renormalization group flow in a space of Lagrangians?
11
Mathematical construction of $\phi^4$ Euclidean field theory
11
How do you know that you have succeeded-Constructive Quantum Field Theory and Lagrangian
4
QFT and its notations

16
Path integrals outside QFT
7
Proof of PCT theorem for Haag-Kastler nets in QFT
74
What is the amplituhedron?
9
Rigorous scaling limit for Navier-Stokes and Boltzmann equation
11
How do you know that you have succeeded-Constructive Quantum Field Theory and Lagrangian
15
QFT and mathematical rigor
11
State of rigorous effective quantum field theories
5
Quantum mechanics outside $L^{2}$ spaces
Question feed