Jacobi's elliptic functions and plane sections of a torus

The composition of mappings takes the embedded torus to the sphere.

Fact 2: This composition of mappings is conformal except at four points on the torus (corresponding to points at which the derivative of Jacobi's function is $0$).

(Unless I got some of the nitpicking details wrong about which points map to which) I believe I have reason to suspect the following really startling proposition:

POSTSCRIPT: If I'm not mistaken, I've reduced this to the following.

Now look at the inverse-images of straight lines through $0$ corresponding to arguments (i.e. angles from the real axis) between $0$ and $45^\circ$. Those inverse-images should be graphs of functions of the form $y=\arcsin(c\sin(x))$ where $x$ and $y$ are respectively the real and imaginary parts.

Is that a known proposition about Jacobi's functions?

Postscript: Greg Egan created a visual illustration of what I described above. What is seen below is a compressed version. His original looks better. But it still moves as fast as this one. A version that moves much more slowly would be better.

This is more comment and question than answer, but I'm writing it as an answer because it's too long to fit as a comment.

Michael Hardy kindly pointed me to a reference on the original mapping between the plane and the sphere:

Here, Peirce defines the mapping between a point $(x,y)$ in the plane and a point on the sphere with co-latitude $p$ and longitude $\theta$ as:

The tables in Peirce are rescaled to make the factor of $K$ go away, but they also seem to be flipped and translated relative to his initial definition. I can reproduce Peirce’s tables with Mathematica if I take them to be describing $x',y'$ where, in relation to his original $x, y$ we have:

He defines a conformal map between a torus in $\mathbb{R}^3$ and this square in the complex plane via:

We also have the stereographic map, projecting from the south pole of the unit sphere onto a plane through the equator, whose inverse can be written:

[Edited to add, 21 Feb 2017: I’ve just belatedly noticed that in the question, the stereographic projection is defined with the poles of the unit sphere on the $x$-axis, rather than the usual convention of putting the poles on the $z$-axis. This explains why I was unable to verify the original claims, and ended up reorienting the torus to make things work.]

Now, the conjecture is that there is a family of planes $\scr{P}$ such that for any plane $P \in \scr{P}$ we have:

where $\scr{T}$ is the torus, $\scr{S}$ is the sphere, and I've dropped the subscripts $0$ from the maps because I want to allow the original versions to be adjusted slightly.

To accommodate the $x z$-plane, note that the intersection of the torus with this plane corresponds to the lines $\beta=0$ and $\beta=\pi$, the first of which is mapped by the initial linear transformation in $H$ to a line at 45 degrees that passes through the point $z=K$ in the domain of the original Jacobi function, and contains alternating zeroes and poles of the function. If we take a midpoint between a zero and a pole, such as $\frac{3}{2}K+\frac{1}{2}K i$, the Jacobi function evaluates to $-\sqrt{\frac{1}{2}}(1+i)$, which corresponds to a longitude of $\frac{5\pi}{4}$ on the sphere. We can’t remedy this by offsetting $\beta$ in the torus map, because the only lines of constant $\beta$ in the fundamental domain of $H$ that ultimately map to meridians on the sphere are $\beta=0$ and $\beta=\pi$. So we need to redefine the map from the complex plane to the sphere by adding a rotation of $-\frac{\pi}{4}$:

Having made these changes, let’s see exactly what happens for the two planes.

However, given the maps that seem to have been forced on us by the need to make things work for these two planes, I can’t see how to make the case $x=\pm z$ work, or $y =\pm z$ (I'm not sure whether the claim that the conjecture is true for the former is a typo and the latter was intended, because the initial conjecture was for planes containing the $x$-axis, and $x=\pm z$ do not contain the $x$-axis).

For the case $y =\pm z$, consider the curve (in fact, a straight line) in the fundamental domain of $H$ given by:

These plots might be helpful. They show the $(\alpha, \beta)$ domain, coloured according to which plane the image of each point lies on, when sent either to the sphere or to the torus. Here, I am using the original maps, $\psi_0^{-1} H$ and $\phi_0^{-1}$ to take the $(\alpha, \beta)$ domain to the surfaces of the sphere and the torus. The hue of each point depends on the angle measured around the specified axis in $\mathbb{R}^3$, modulo $\pi$, with points coloured black when the angle lies close to a multiple of $\pi/4$. 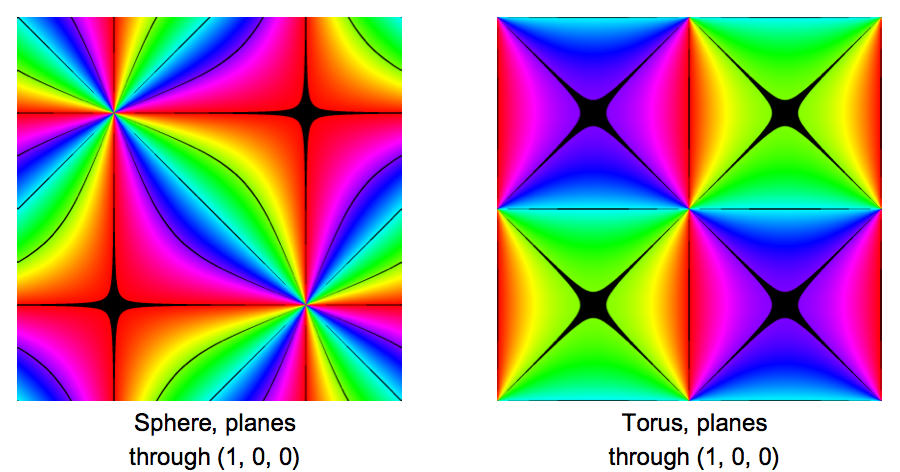 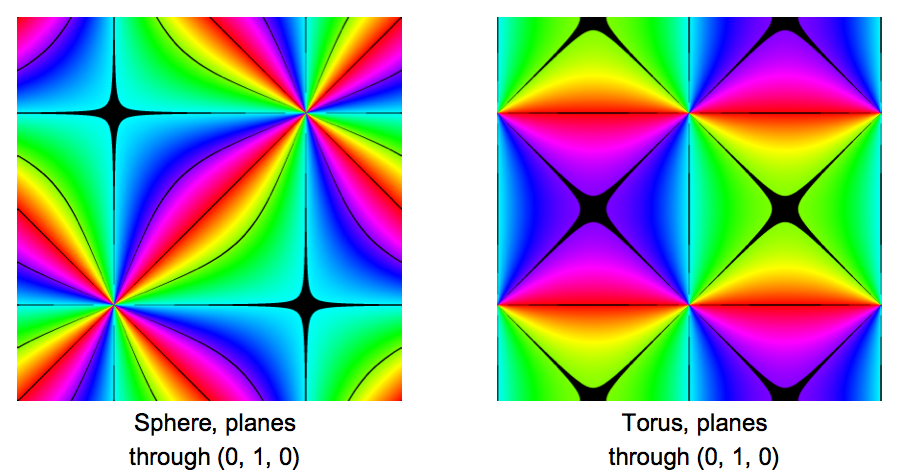 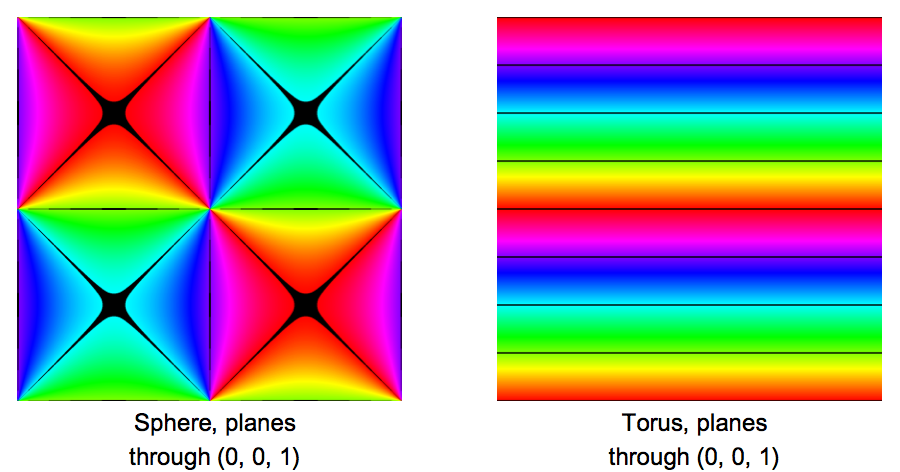 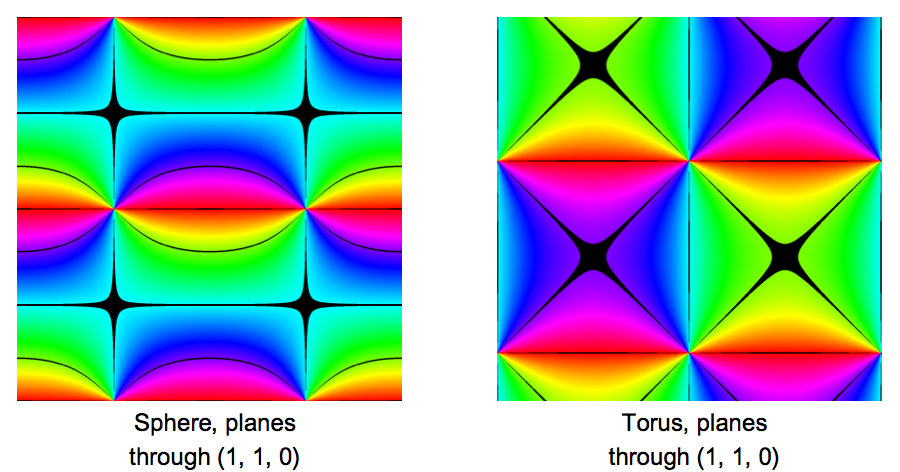 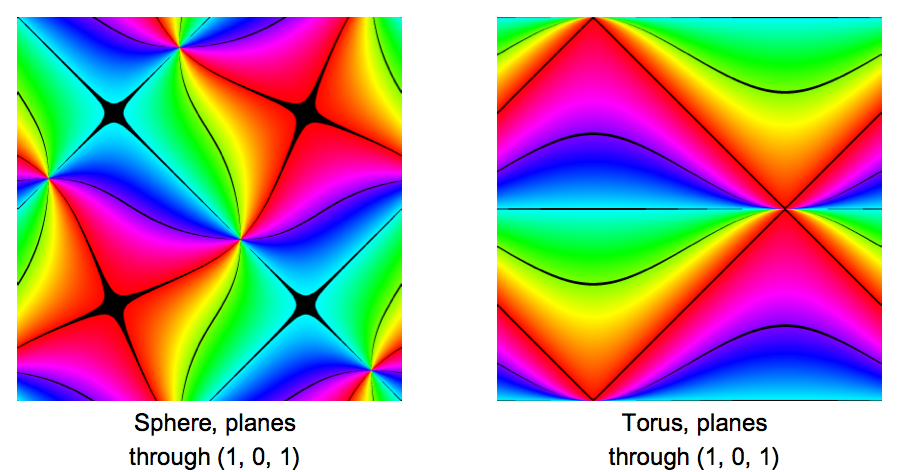 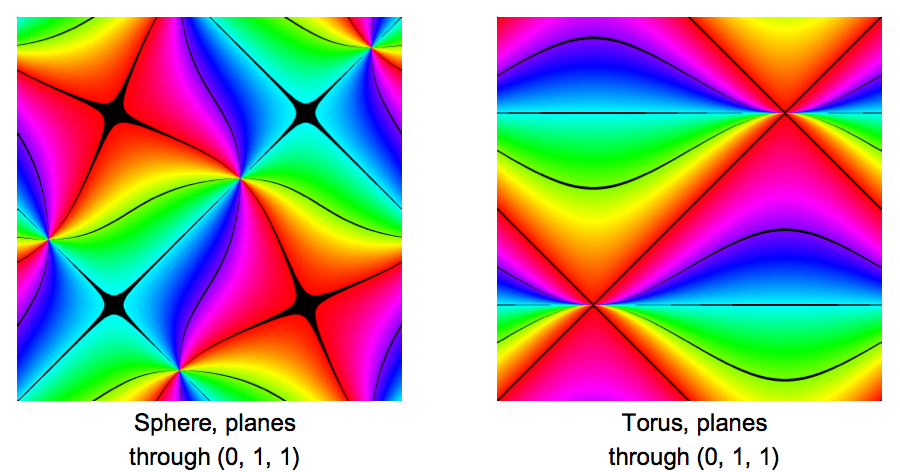 Edited to add: Noting the similarity between the plot for the torus with planes around the $x$-axis and the plot for the sphere with planes around the $z$-axis, I've found that the two can be brought into very close alignment by a change of basis for the torus that preserves the axis, but measures the angles in the opposite direction and translates them all by $\pi/4$. To be precise, if we use the standard basis for $\mathbb{R}^3$ for the sphere, and the basis:

for the torus, and then compare the azimuthal angles in polar coordinates adapted to the respective bases, then these angles are very similar, differing from each other by an average of about 0.025.

And the angles agree exactly when they are multiples of $\pi/4$.

I guess this must correspond to Michael Hardy's original observation.

Edited to add: This is what the final map from the torus to the sphere looks like: 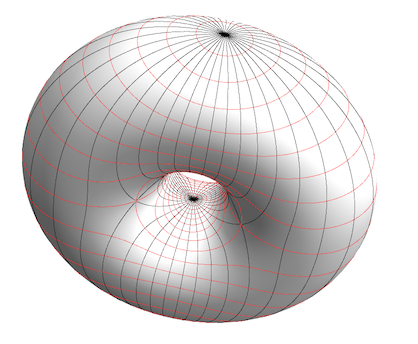 Meridians pulled back from the sphere are in black, lines of latitude in red. The pullbacks of the meridians come very close to lying in the same planes as the original meridians on the sphere, if we define:

I hazarded this guess by

However yesterday I went over this the old-fashioned way, using some tables that were published in the 19th century. And a calculator for values of the arcsine. The proposition as stated is false, but comes fairly close to the truth numerically. Impressive counterfeits, but detectable if you're careful. Now I'm wondering if a slight modification of the curve that gets revolved about the $z$-axis would make this true.

Not the answer you're looking for? Browse other questions tagged cv.complex-variables conformal-geometry elliptic-functions or ask your own question.

2
Will a slightly differently shaped torus make this guess about plane sections of a torus true?

85
Demystifying complex numbers
1
Hurwitz, A. and R. Courant: Funktionentheorie , elliptic functions part
13
How to interpret Gauss's late fragments on conformal mapping of the interior of an ellipse (to the unit disk) in modern mathematical terms?
3
Question about the correspondence between unitary Möbius transformations and quaternions
3
Generating function of the product of Legendre polynomials
Question feed