Does existence of midpoints imply intrinsic?

Can we replace completeness by something else?

It seems that $\varepsilon$-midpoints are completely useless without completeness (a disc without one radius is an example).

On the other hand, it seems that the existence of midpoints is a rather strong condition. So far I have the following examples:

$\mathbb{R}\times(0,+\infty)\bigcup \mathbb{Q}$ with the induced metric is a space with midpoints, which is not strictly intrinsic, but still it is intrinsic.

Now let us assume that in connected locally compact (or merely locally path connected) metric space $X$ for any two points there is a midpoint. Is it true that this space is (strictly) intrinsic?

There were numerous edits, because I have added two counterexamples, one of which later proved to be completely incorrect, and another one had a mistake.

The answer is no.

There is a locally compact, connected metric space, where any two points have a midpoint, that is not intrinsic.

The example I have in mind looks a little bit like this: 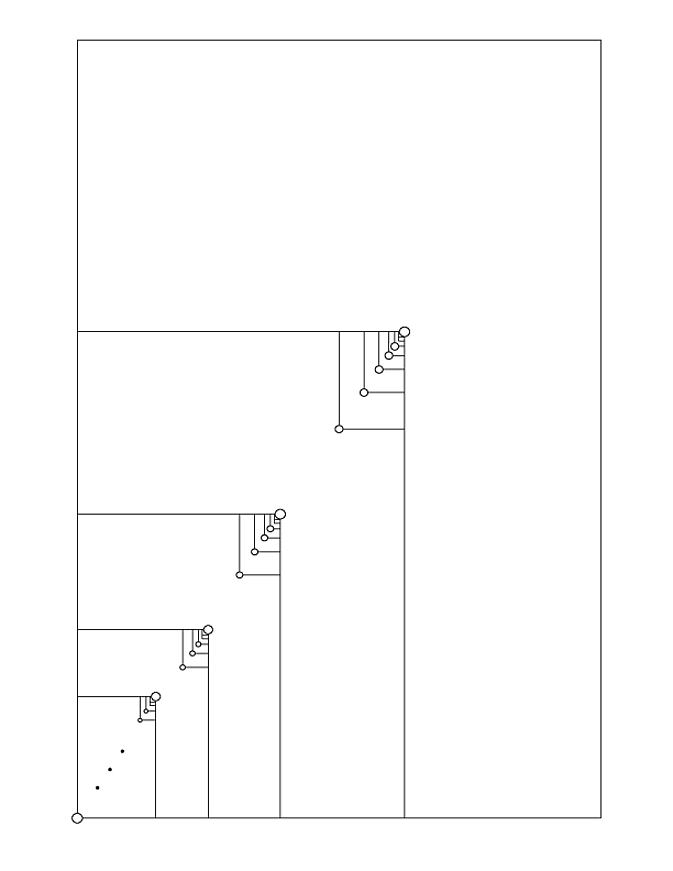 [The little circles are meant to indicate holes in my rectangles (not little arcs).]

The metric for this space is the "modified taxicab metric", by which I mean the metric that measures the shortest path between two points, but where I allow paths that jump over holes. (One could imagine a taxicab in New Orleans, which by necessity has to learn to ignore potholes and just run right over them.)

I say that my example looks "a little bit" like this because I have only drawn two iterations of the construction, but I would like to imagine that we have done infinitely many iterations.

A little more precisely, let's call the big rectangle $B_0$. Notice that its bottom left corner has been removed, making a hole. Let's consider this holey rectangle to be stage $0$ of our construction. To get stage $1$, we build an infinite sequence of "bridges" accross the hole, which we'll call $B_1^n$, $n \in \mathbb N$, and remove a point from each bridge, making more holes. The exact manner in which the bridges are constructed is irrelevant, provided we do two things:

This completes stage $1$ of the construction. Further stages work the same way: for each hole from stage $n$, we construct an infinite sequence of holey bridges at stage $n+1$ (and we do it in such a way that the above two properties are satisfied). Ultimately, the space I have in mind is the union of all these stages.

Let's check that this space has the properties you require.

It is locally compact.

Every point in our space has a neighborhood that is homeomorphic to either an interval or a triod (the letter T). This makes the space locally compact.

It is connected (even better: it is path connected).

A straightforward induction on $n$ shows that if we add a point to our space at stage $n$ of our construction, then there is a path from that point to $B_0$. Since $B_0$ is path connected (because I didn't remove the top right corner!), it follows that the whole space is path connected.

Any two points have a midpoint.

Let $p$ and $q$ be any two points in our space, both occuring in stage $n$ of the construction. If we temporarily ignore the holes in our space, then there is a (not necessarily unique) shortest path connecting $p$ to $q$, and it is contained in stage $n$ of the construction. Because of the metric we've chosen, the midpoint $r$ of this path should be a midpoint between $p$ and $q$ (the only potential problem being that $r$ might not be in our space -- it could be a hole). If $r$ is not a hole then it is a midpoint for $p$ and $q$. If $r$ is a hole, then we can modify our path between $p$ and $q$ using one of the bridges we built around the hole. Because of our first bridge-building condition, this modified path has the same length as the original one. Therefore its midpoint, $s$, should be a midpoint for $p$ and $q$ as well. Our second bridge-building condition guarantees that $s$ is not a hole.

It is not intrinsic.

Let $p$ be a point in (the interior of) the left edge of $B_0$ and let $q$ be a point in its bottom edge. Any path connecting $p$ and $q$ must go through the top right corner of $B_0$ (Why? Because removing this point disconnects the whole space!). It is clear that any such path is significantly longer than the distance from $p$ to $q$. Thus this space is not intrinsic.

Not the answer you're looking for? Browse other questions tagged gn.general-topology mg.metric-geometry metric-spaces or ask your own question.

21
Intrinsic metric with no geodesics
1
What are the topological properties of the metric space retained (inherited) for its completion
13
Is every connected metrizable locally path connected space a length space?
6
When does heat kernel have both Gaussian upper and lower bounds?
11
Tameness in $\mathbb{R}^{n^2}$ of the subset consisting of matrices of positive determinant
12
Intrinsic vs Extrinsic geometry of convex surfaces
1
Topology of length spaces
Question feed