Who discovered this definition of Stiefel-Whitney classes?

I would define Stiefel-Whitney classes as the pullbacks of generators of $H^*(BO, \mathbb{Z}/2)$ under a classifying map, and I gather this is a pretty common definition.

However, the book "Characteristic classes" by Milnor-Stasheff contains a different definition, as ``eigenvalues'' for the Steenrod squares acting on the fundamental class of a manifold in its normal bundle. I want to attribute this construction to somebody for a paper, but I'm not sure what the correct attribution is. Who is the discoverer of this definition?

For the relation $Sq(U) = \Phi(w)$, where $Sq$ is the total Steenrod squaring operation, $U$ is the Thom class, $\Phi$ is the Thom isomorphism and $w$ is the total Stiefel-Whitney class, I would cite Rene Thom's 1951 thesis, published as "Espaces fibres en spheres et carres de Steenrod" in Ann. Sci. Ecole Norm. Sup. (3) 69 (1952). In the introduction he explains that he found the results for manifolds embedded in Euclidean space, and that Henri Cartan then showed him how to obtain the general case. These results were first announced by Thom in two Comptes Rendus Acad. Sc. notes (t. 230, 1950, p. 427 and p. 507). Wen-Tsun Wu's formula $Sq(v)=w$ in the case of the tangent bundle of a closed manifold is not the same result. It was announced in the same volume of Comptes Rendus (p. 508 and p. 918). Its proof depends on the results of Thom.

Both works are discussed in this article: 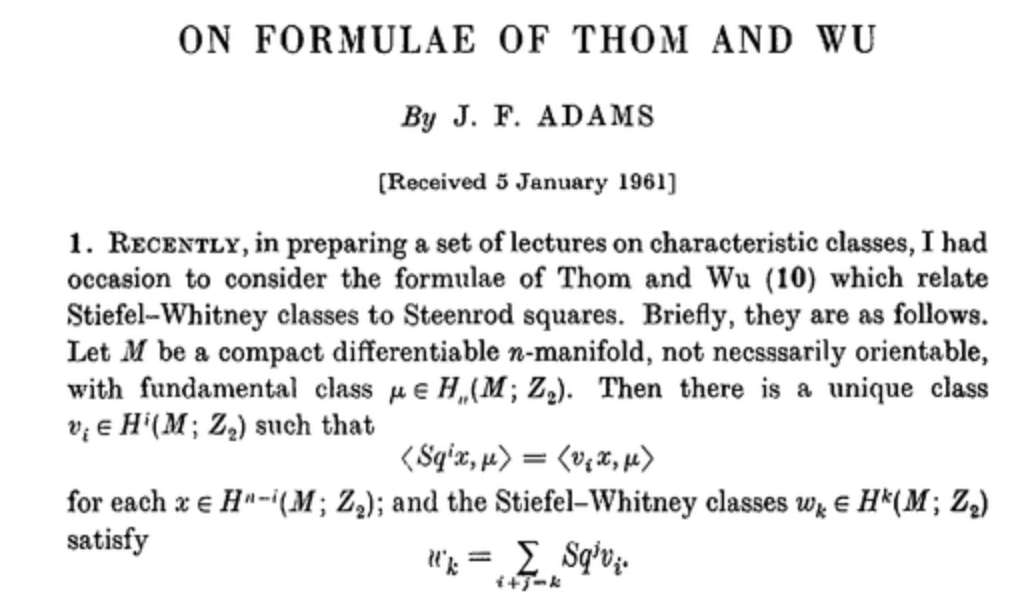 The AMS has spent a lot of money and effort over many years to develop a fine tool that easily allows for the investigation of such questions: it is called Math Reviews (MathSciNet). The oldest mention of SW classes in the reviews seems to be a review by Whitney of a 1947 paper by Wu. There is a fantastic review (in German) by Hirzebruch of Milnor and Stasheff's book, giving some history - e.g. the SW classes go back to the mid 1930's. I believe Milnor and Stasheff themselves discuss how to think about SW classes as obstructions, and I am pretty sure that this finding this interpretation was quite close to the discovery of the formula for the SW classes via Steenrod squares: this type of question is how the `reduced squares' were discovered in the first place.

In particular, section 3 of chapter 2 carefully develops the formula for the SW classes via Steenrod squares, and compares it to earlier constructions. Chapter 1 discusses what folks might now call the Thom isomorphism (though the Gysin sequence is already known).

Remark: the basic theory of fiber bundles and classifying spaces is just being figured out at this same time.

Not the answer you're looking for? Browse other questions tagged at.algebraic-topology vector-bundles characteristic-classes or ask your own question.