In this particular example the integral (i.e. the difference vector) vanishes for the "minus sign" case. Thus, the two branches $\pm \infty $ endpoint limits must coincide. In other words, the corresponding Riemann sum limit curve is a closed curved (BLUE + LIGHT BLUE when taken to $t \rightarrow \infty $). Whereas for the other sign case (the green branches) the limit curve is open. It is easy to verify how the difference vector (red line) joining the two endpoints of the GREEN + LIGHT GREEN branches indeed approximates $\frac{2 \pi }{e^{a}} = 4.89... $

From a topological perspective one might observe that the GREEN + LIGHT GREEN curve may be obtained from the BLUE + LIGHT BLUE by rotation of each "infinitesimal" vector $e^{ix_n}/(a -ix_n) \ \Delta x$ by the angle $-2\arctan \frac{x_n}{a}$ (because $a+ix = (a-ix)e^{i2\arctan \frac{x}{a}}$). This would also suggest that, for any given $t$, the lengths of the green and blue curves are identical.

If we take any closed curve (not necessarily a simple one), we cut it at one point, and we redraw it in such a way that at any point the original value of the tangent vector to the curve is now rotate by 180°, we will obtain a curve which is also closed (and symmetrical to the one we started from). Intuitively, one might expect that if, instead of considering a fixed 180° rotation angle, we progressively increase said angle along the length of the curve (we have first to agree on the starting point, which is the origin in the example of the plot below), starting from 0° at $x=0$ and up to the asymptotic 180°, we would instead obtain an open curve. However, intuition alone is often misleading, and unfortunately a rigorous proof has so far eluded me.

Finally, I am looking for suggestions and advice on whether, to your knowledge, there exist general topology theorems or results which could possibly be of any help in proving the integral inequalities we started from, based only on topological arguments aimed at proving that a closed curve (e.g the one described by the vanishing integral as $t \rightarrow \infty $), cut at the point $t =\infty $, then "twisted around", starting from the origin, in such a way that at each point the tangent vector to the original curve is rotated by $2 \arctan (x/a)$, would result in a new curve which is instead necessarily open. 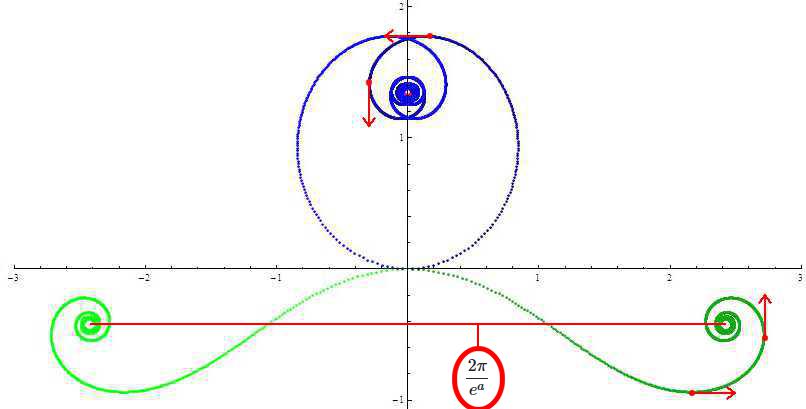 Not the answer you're looking for? Browse other questions tagged gn.general-topology cv.complex-variables integration or ask your own question.