Where does the name "R-matrix" come from?

In quantum integrability and related topics a lot of not-so imaginative terminology is used. One may hear people talk about "Q-operators", "R-matrices", "S-matrices", "T-operators", as well as "L-operators". In fact, this has further led to even less poetic names such as "RTT-relations" and "RLL-relations".

My question is if anyone knows what the origin of this terminology is: where and when were they first used? I am particularly interested in this for the name "R-matrix", and why the letter "R" was chosen.

The physical roots of quantum integrability lie in several different areas, which has led to quite a few examples of terminology that (only) makes sense in one of these contexts. An example is "auxiliary" vs "quantum" (or "physical") space: this is sensible nomenclature for spin chains in the quantum-inverse scattering method, but arbitrary from the vertex-model viewpoint. In any case, having these different possible origins makes it a bit harder to trace back terminology.

After a bit of research my best guess for an explanation of the origins of the above terminology is as follows. I'd be glad for any corrections or comments.

Perhaps, then, the R-matrix's name (or notation $R$) was chosen to resemble "S-matrix" (or $S$). Note that Yang writes $Y$ for the R-matrix. Baxter usually uses $w$ (or $W$) for the vertex weights, i.e. the entries of the R-matrix: he seems to prefer the star-triangle relation, i.e. the Yang-Baxter equation in components. According to Perk and Au-Yang the notation "R" comes from the Leningrad school.

In can further imagine that Baxter might have denoted his operator by $Q$ to continue this (anti)alphabetic sequence.

Given these names it's not strange that other quantities may get (nick)names that are formed in analogy. This has happened to the operators originating in the classical inverse-scattering method: the Lax operator, sensibly denoted by $L$, is also called the "L-operator" and the monodromy matrix, $T$, the "T-operator". (Maybe the notation $T$ for the latter comes from its relation to the transfer matrix, for which $t$ is a reasonable notation -- although Baxter writes $V$ for the latter.)

Finally the names "RTT-" and "RLL-relations" just represent the form of those equations (expressing the quasitriangularity of the R-matrix for a representation) given the preceding notation.

The $R$-matrix of scattering theory was introduced by Eugene Wigner in the paper Resonance Reactions, Physical Review 70, 606 (1946). He writes that he chose this symbol because it has the dimension of length ("radius"). 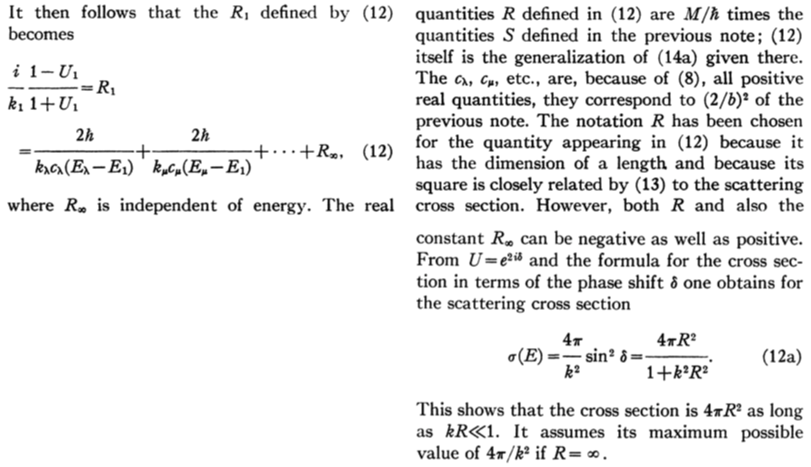 The scattering theory in terms of the $R$-matrix was worked out in detail in a subsequent paper by Wigner and Leonard Eisenbud, and that is the reference that is often cited as the origin.

(See update at the bottom)

I could not resist: in the meanwhile I have searched the literature further. I think the following is an interesting addition to my best guess from the OP, which is why I have chosen to share it, even if it isn't the definitive answer to my question.

As I (almost correctly) mentioned, Perk and Au-Yang suggest the Leningrad group was first to use the name "R-matrix". The first publication of the Leningrad group where the symbol "R" appears in this context seems to be the founding paper of the quantum-inverse scattering method,

with the Russian original submitted on April 17, 1979. In this paper it is subsequently referred to simply as "the matrix R". To the best of my knowledge the first time where the name "R-matrix" is used in this context appears to be (see the bottom of p20)

received by the editors on June 1, 1979. The authors were certainly familiar with the term "S-matrix", so it is not strange that the matrix R would quickly have gotten a similar name.

Note. In fact the references of the above mention two earlier papers by the Leningrad group on this topic:

These might also mention the R-matrix, which would push the earliest occurrence back a bit futher, but I cannot find those references online. It would be great if anyone could provide a link to a digital version of either of these papers!

Interestingly, tracing back the references of the aforementioned paper by Sklyanin, Takhtadzhyan and Faddeev shows that the notation "R" was in fact already used in Baxter's rather earlier work on the eight-vertex model's partition function,

for the operator containing the local Boltzmann weights at the vertices. I can't find earlier sources where "R" is used in this context; in particular it is not used in the references of Baxter's paper. Thus it seems reasonable to assume that Sklyanin et al adopted Baxter’s notation for the R-matrix.

It would still be nice to know if Baxter’s paper is indeed the first time the notation "R" was used for what is now known as the R-matrix, and, if so, whether there was any specific reason why Baxter chose to use that symbol in his paper. (The rather different context, of lattice models in statistical physics, suggests that Baxter did not choose R in analogy with S-matrix.)

Update (2020.XII.28). At the start of this year I had the opportunity to ask Baxter in person, at the conference Baxter2020 in Canberra in honour of his eightieth birthday. When I told Baxter the above and asked him if he had any reason why he chose the letter R he looked somewhat surprised at the question, shrugged and said with a smile "It was probably the next letter that came to mind!"

I also asked Baxter about the choice for Q for his Q operator, and the answer was similar.

At the conference I did, however, find out the origin of some similarly imaginative terminology for three systems of functional equations by talking with Klümper, Kuniba and Pearce:

The "Y system" was named so in

in honour of Yang and Yang, who invented the thermodynamic Bethe ansatz that leads to these equations.

The "T system" first appeared in work of Klümper and Pearce, where t was used since it is a linear combination of transfer matrices T. Kuniba then introduced "T system", where

By T we meant Transfer matrices, but it can either be thought as Toda or Tau.

According to http://link.springer.com/article/10.1007%2FBF01076717 the method of the classical r-matrix first appeared in the paper "On the complete integrability of the Landau-Lifshitz equation" by Evgeny Sklyanin: https://www.researchgate.net/publication/247031108_On_the_complete_integrability_of_the_Landau-Lifshitz_equation In this paper I have not found any explanation why the nomenclature r was used. In the paper http://www.mathunion.org/ICM/ICM1983.2/Main/icm1983.2.1331.1346.ocr.pdf L.A. Takhtajan mentions that L.D. Fadeev gave a very elegant interpretation of the r-matrix in the language of the representation theory. So, in retrospect, we can assume that R means "representation theory".

Not the answer you're looking for? Browse other questions tagged mp.mathematical-physics ho.history-overview qa.quantum-algebra terminology notation or ask your own question.

1
Quantum channels, question 2: tensor products and composition of functions
6
Where does the name "Reynolds operator" come from?
3
quantum states and observables for the non-commutative torus
2
Geometrical interpretation of a Schrödinger operator
6
Compact Quantum Groups and FRT-Algebras
4
Why does the type-A subdivision algebra look like the Rota-Baxter algebra axiom?
5
Scattering theory for Coulomb potential
3
Spin-statistic for free quantum fields
Question feed