Xu He's article Rigidity of Infinite Disk Patterns and I have a problem with a statement he makes on page 7.

Claim: Suppose $T$ is the $1$-skeleton of a triangulation of a planar surface possibly with boundary so that each boundary component has at least four vertices, and the following two conditions hold

Then a vertex in $T$ is interior (as defined above) precisely when it lies in the interior of the surface.

I can't seem to be able to prove the direct implication: if $v$ is an interior vertex, then it belongs to the interior of the surface. In fact it seems to me that the triangulation of the closed disk below is a counterexample to the claim. 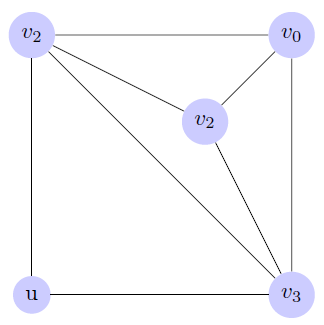 Am I missing something? I will be very thankful if anybody can explain why the claim is true and what goes wrong with the above ''counterexample''.

Browse other questions tagged graph-theory triangulations weights circle-packing or ask your own question.

19
A generalization of the triangle counting problem for simple weighted graphs
5
Small Ramsey numbers and Brooks' Theorem
9
Hamiltonian circuit
3
Graph transformation related to graph isomorphism
1
Partition of a graph into sub-graphs with limited degree
1
monochromatic induced subgraph in a complete 3-partite graph
2
Vertex reachability in directed graph
2
Find the number of edges
3
Is following function a metric on the set of isomorphism classes of graphs with countably many vertices?
Question feed