Two examples to illustrate the question:

A theorem that shows this under some additional assumptions on the metric space would also be interesting.

The answer is no without further assumptions, here is a counterexample (a bit nasty, it is not locally simply connected) :

As you are probably aware, the answer is yes on a smooth riemannian manifold. I suspect the same thing is true on a smooth Finsler manifold. A $CAT(k)$ metric space would have this property since the distance to a point is then convex (on balls of radius $\tfrac{\pi}{2\sqrt{k}}$ if $k>0$).

This leaves a lot of room for improvement, for instance :

The standard sub-Riemannian metric on the 3-dimensional real Heisenberg group $\mathbb{H}^3$ is a counterexample. Topologically, it is homemorphic to $\mathbb{R}^3$, so in particular it is locally contractible. It is geodesic, but no ball is convex.

Thanks to the homogeneity and dilation structure, it suffices to know that, say, the unit ball centered at the origin is non-convex. It looks sort of like an apple, as in this cutaway view: 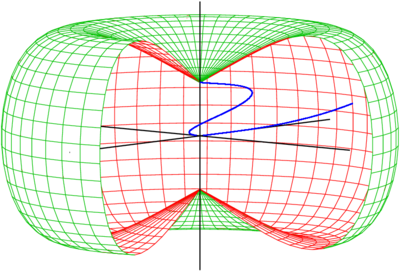 But every horizontal line through the $z$-axis is a geodesic.

(Oh, I guess you did ask for a compact example. So take a compact subset with nonempty interior: for any point in the interior, all sufficiently small balls are non-convex.)

Intuitively, you can enclose area more cheaply if you're willing to end at a different $x$ or $y$ coordinate from your starting point, since you get the straight line back home for free.

There is actually a much more striking result than non-convexity of balls in the Heisenberg group discussed in the answer of Nate Eldredge.

While the definition of the sub-Riemannian metric on $\mathbb{H}^3$ has been explained by Nate Eldredge, I will skip that part and just formulate the theorem.

That means there are very few convex sets and in particular the smallest geodesically convex set containing a ball must be $\mathbb{H}^3$.

This is a remarakable result because, the Heisenberg group is one of the nicest non-Euclidean metric spaces that allows one to carry out most of the analysis in Euclidean spaces. It also serves as an ulitmate example for testing new conjectures in analysis on metric spaces.

The above result is Theorem 1.1 in:

Not the answer you're looking for? Browse other questions tagged mg.metric-geometry convexity or ask your own question.

15
What is known about Ulam's problem of metric spaces with isometric squares?
2
Geodesic convex hulls in a graph; and their properties
4
Fixed points of finite order isometries of metric spaces
2
distance formula of warped products
7
Complete geodesics on hyperbolic a pair of pants
1
Metric projection on closed convex sets in Busemann space
0
Planar function inequality on parallelograms
Question feed