What is the spinor genus of the Leech lattice?

The Leech lattice and the 23 Niemeier lattices make a single genus. How does it break up into spinor genera?

see Mass of spinor genus, positive integral quadratic forms for the statement that spinor genera in the same genus have the same mass, answer by Schulze-Pillot.

The spinor genus count being a power of two, if there were more than one, we would be able to collect the reciprocal automorphism counts into two subsets with equal sum. However, from SPLAG Table 16.6 on page 413, we see that this impossible. All but one number are even, the number for $D_{24}$ is odd. All but one number are divisible by $5,$ the number for $A^6_4$ is equivalent to $2 \pmod 5.$

The mass is just the sum of the reciprocals of the automorphism counts. An automorphism meaning, given the Gram matrix $G$ of a positive form, an integer matrix $A$ such that $A^T G A = G.$ The set of such $A$ is finite when $G$ is positive. For the automorphism group of a positive form, or lattice $\Lambda,$ SPLAG writes $|\mbox{Aut}(\Lambda)|.$ For a spinor genus, we just sum up the reciprocals of these integers for all equivalence classes of forms/lattices in the spinor genus. Oh, SPLAG does not list these counts as such for this genus, the counts are enormous. 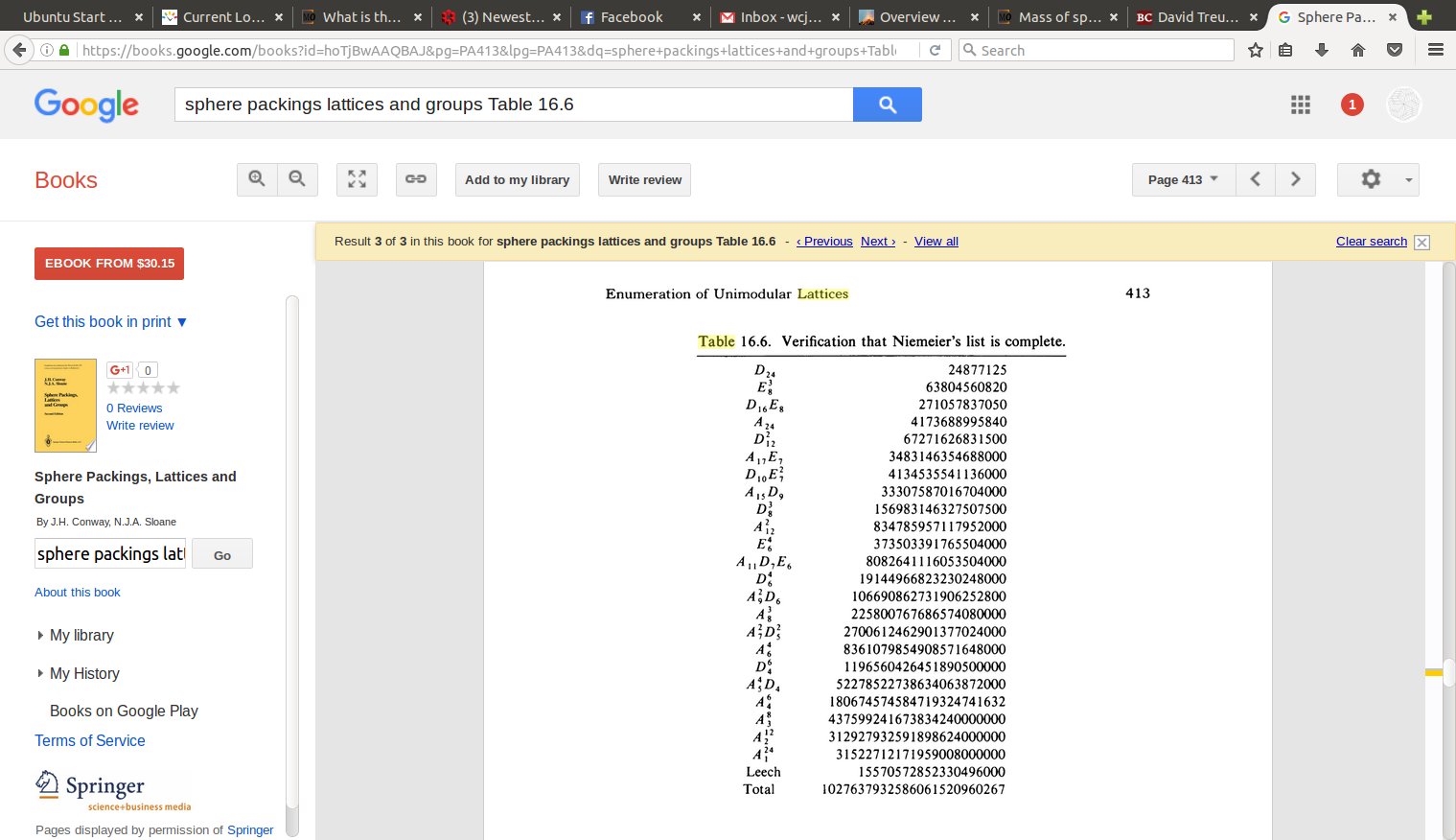 The genus of every even unimodular $\mathbb Z$-lattice has only one spinor genus. See O'Meara, particularly Example 102:10.

Not the answer you're looking for? Browse other questions tagged lattices euclidean-lattices or ask your own question.

6
Mass of spinor genus, positive integral quadratic forms
2
Is there a way to express an power law decay as a series of exponentials?

5
Lorentzian characterization of genus
2
Genus and Spinor genus of a lattice
2
Implementation of the bounded-distance decoder of Leech-lattice?
0
dither in Leech lattice quantization!
7
genus and spinor genus over a number field
5
Bound on Minimal Length of Vectors in Lattice and its Dual Lattice
0
Map homemade Leech lattice to classic one
1
Densest sphere packing for a given lattice
Question feed