Is there an algorithm for reporting all empty ellipses, that are locked by a finite set $\mathcal{P}$ of points in the euclidean plane?

Any information about the problem of determining the set of all locked empty ellipses for a given set of points $\mathcal{P}$ (e.g. complexity of algorithms, bounds on the number of ellipses, etc.) would be appreciated.

This is not a direct answer, but the techniques in this paper seem applicable to your problem:

They enumerate maximal empty ellipsoids, which are defined differently from your notion of "locked": a maximal empty ellipse is one such that every infinitesimal perturbation of its center, axis lengths, or orientation yields an ellipse that is either smaller or not empty.

The main technique is to map the problem in $\mathbb{R}^2$ to enumerating the facets of a convex hull in $\mathbb{R}^5$, and analogously for arbitrary $d$. The complexity then follows from the upper-bound theorem for convex polytopes. 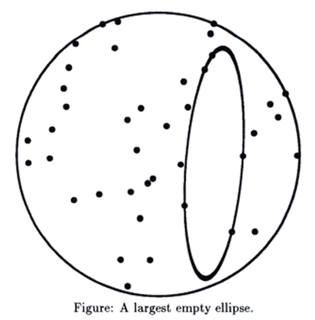 The location of an ellipse center, and its size and shape are given by 4 real parameters. Throw in rotation with respect to a fixed coordinate system, and you have five-ish real parameters to play with. This suggests to me that you will need to look at subsets of five points of P to determine what is locked.

You might be clever on how to develop an envelope using just three points, giving you smarter choices for the fourth and fifth points, but I don't know if smarter means faster.

Not the answer you're looking for? Browse other questions tagged algorithms discrete-geometry or ask your own question.

0
Calculating a Measure of the Geometric Complexity of Planar Closed Polylines
4
Complexity of Determining the Edges of Planar Convex Hulls
4
Algorithm for reporting all triangles with unique interior point
2
Given an input point in $\mathbb{R}^n$, select (one of) the closest point(s) from a fixed large set of points given in advance
Question feed