Quotient of $S^3$ by Montgomery and Zippin's “wild involution”

In 1954, Montgomery and Zippin modified Bing's example to give a not-conjugate-to-locally-linear topological involution of $S^3$ with a one-dimensional fixed point set.

Do we know what is the quotient of $S^3$ by Montgomery and Zippin's involution?

I think what happens is this: Montgomery-Zippin describe a particular a particular continuum in $\mathbb{R}^3$ (based on Bing's example, as an intersection of "rings") which intersects the $x$-axis in a Cantor set, and which is invariant under rotation by $\pi$ in the $x$-axis (in the picture, the first stage of rings in Bing's construction is shown; Montgomery-Zippin reflect the crossings of the rings on the right side so it is invariant under $\pi$-rotation). 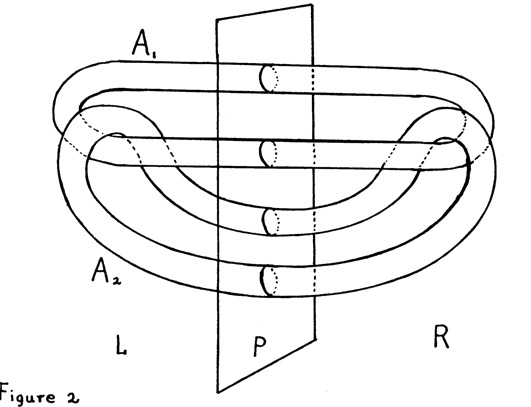 Moreover, there is a plane (say the $xy$-plane P) which also intersects this continuum in the Cantor set $C$ in the $x$-axis, and so that a collar neighborhood intersects the continuum in $C \times (-1,1)$. The decomposition space of this continuum (which can be regarded as a union of intervals) is again $\mathbb{R}^3$, as proved by Bing. Moreover, the $xy$-plane projects to a plane which bounds an Alexander horned sphere on each side.

If we take this picture and quotient by $\pi$-rotation in the $x$-axis, then this amounts to taking the half-space $z\geq 0$, and identifying the two half-planes in its boundary $y\geq0, y\leq 0$. This identification has quotient $\mathbb{R}^3$ again, and I think it's clear (because of the collar observation above) that the upper-half of the continuum projects homeomorphically to this quotient. Then the quotient by the involution will be the quotient by this "half" continuum. But (as Bing showed), the quotient of the upper half-space by half the continuum is the Alexander horned sphere. And the lower half space will just be a standard half-space. So this is just the usual embedding of the Alexander horned sphere in $\mathbb{R}^3$ I think, so the quotient is $\mathbb{R}^3$ again.

In the Montgomery-Zippin paper, they have a usc decomposition of $E^3$ (or $S^3$) into arcs and points and the decomposition space of that is again $E^3$ (resp. $S^3$), as they say. But then there is the decomposition of that by the $\mathbb{Z}_2$ action having the wildly embedded arc (resp. circle) as a fixed point set. But this decomposition space too is $E^3$ (resp. $S^3$), as seen by considering the action of the rotation on the complement of the interiors of any one stage of the dyadically nested tori (in $S^3$ it is just the double cover of a torus about its longitude).

Not the answer you're looking for? Browse other questions tagged gt.geometric-topology gn.general-topology or ask your own question.

3
Powers of quotient maps
28
Why are there no wild arcs in the plane?
11
compact quotient
3
Quotient Metric Space
15
$(n-1)$-dimensional sphere in $S^n$ such that the closure of a component of complement is not contractible
10
Wild half-line in a Euclidean space
20
Can a finite group action by homeomorphisms of a three-manifold be approximated by a smooth action?
10
6-manifolds admitting SO(3) action with 2 orbit types
9
Reference request for wild 3-manifolds
Question feed