When can I find a continuously-varying basis of eigenvectors for a non-simple eigenvalue?

This is related to my last question that went sadly unanswered (Is my matrix perturbation analysis legitimate?).

Again, I have a matrix whose entries are integer polynomials in a single real variable. In this situation, the determinant and (the entries of) any suitably normalised eigenvectors associated with simple eigenvalues vary continuously with the variable.

However it may be the case with a higher-dimensional eigenspace that there is no possible choice of basis such that each vector in the basis has continuously varying entries. The small examples that I know have the property that at the point of discontinuity two eigenvalues collide forming a 2-dimensional eigenspace and then as the parameter increases further, they split again but now with two completely different eigenvectors.

However I cannot find any criteria that enable one distinguish between the two situations - when it is possible to find a "continuous basis" and when it isn't?

Numerically (by computer) my troublesome eigenspace admits a continuous basis, but numerical is not enough...

Here is a Mathematica plot of the 6 smallest (in magnitude) eigenvalues of my matrix as the variable varies from less-than to greater-than the point at which the eigenvalues coincide. 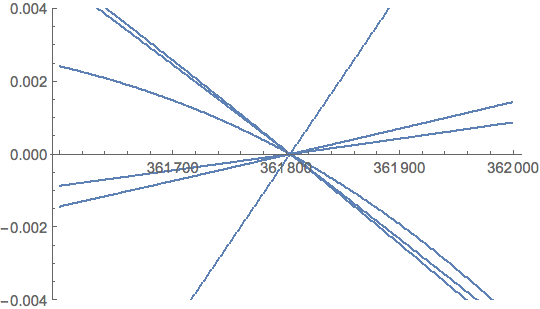 The beginning of the following paper has a quite complete overview on available results:

Not the answer you're looking for? Browse other questions tagged linear-algebra matrices or ask your own question.

19
Conditions for smooth dependence of the eigenvalues and eigenvectors of a matrix on a set of parameters
11
Is my matrix perturbation analysis legitimate?