Is there a generalisation of the "sunflower spiral" to higher dimensions? 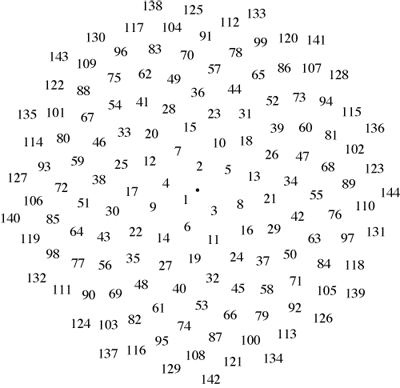 To get this "sunflower spiral" pattern, put the $k$th node at an angle of $2\pi \phi k$ and a radius of $\sqrt{k}$. The effect that this has is that each node is nicely spaced apart from its neighbours.

There are a couple of different ways to think about what this spiral is doing: it's something like a reasonably good packing algorithm in 2 dimensions that works for any number of points being packed. Another way to think about it, looking at the projection of the pattern onto the circle, is as a sequence of measures on the circle, where adding the $k$th puts a point weight at it's argument. This sequence of measures on the circle is near uniformly spaced at each step of the sequence.

The question is: Is there a similar spiral-like thing for 3 (or more) dimensions?

That is (for 3 dimensions), we want to put a sequence of nodes down in $\mathbb{R}^3$ so that the $k$th node is at radius $\sqrt[3]{k}$ from the origin, and so that the resulting pattern is reasonably well packed, in whichever sense analogous to those above you want. Is there a natural way to generate such a sequence on $S^2$ (perhaps by iterating a relatively simple function?), like there is for the sunflower spiral on $S^1$?

This is just bold speculation: The spiral pattern you see arises from a homomorphism from the integers to the unit circle, and the irrationality of $\phi$ gives it a pleasant aperiodicity. In higher dimensions, there isn't an abelian group structure on spheres, so the naive generalization using $d$-parameter families of integers doesn't work. On the other hand, there are infinite discrete subgroups of orthogonal groups whose orbits have dense image in a sphere, so you can take the orbit of a point under the action, ordering by something like word length. An explicit example of such a faithful action of $F_2$ on $S^2$ is given in David Speyer's blog post, using the matrices $\begin{pmatrix} 3/5 & 4/5 & 0 \\ -4/5 & 3/5 & 0 \\ 0 & 0 & 1 \end{pmatrix}$ and $\begin{pmatrix} 1 & 0 & 0 \\ 0 & 3/5 & 4/5 \\ 0 & -4/5 & 3/5 \end{pmatrix}$.

I have no idea what the resulting "spiral" will look like, or how "well-packed" it is.

Addendum: If you choose suitably random orthogonal matrices, you will still get a faithful action of $F_2$. You might have fewer near-collisions with a "less hyperbolic" group, but I don't know much about the geometry.

Bold speculation again, but I would guess the answer for $\mathbb{R}^3$ is 'no'. Heuristically, as r increases you want all of your spheres to 'move a bit' so that they can 'slot into the gaps between the previous spheres'. If this is going to happen in any natural way you're going to be able to project down onto a nowhere vanishing continuous vector field on $S^2$, which isn't going to happen.

In each layer, the spiral starts at the North pole and spirals out something like the "sunflower spiral", eventually crosses the equator. The Southern equator is (more or less) identical to the Northern equator. After the path crosses the equator, it spirals in smaller and tighter curves until it reaches the South pole. The whole spiral is vaguely similar to Sphere Spirals by M.C. Escher. This spiral is one solution to the "place n equally-spaced points on a sphere" problem -- it may not be "the best way to pixelize a sphere", it may not be the best solution to the "Thomson problem", but there is no one "best way to pixelize a sphere". Then you move out an onion-layer and start spiralling back from South to north.

Going at it from another direction: perhaps somehow number the spheres used to form Waterman polyhedra? That gives a much more regular and close-packed set of points (sphere centers) -- but it's not obvious to me if there is any nice formula to convert from sphere-number to xyz coordinates.

So, generalizing the "spiral" sense in which this could be defined (as in, the radial almost-spirals that radiate outwards from a region around the center, such as the sequence 3,11,19,40,61,82,103,124) could we define a 3d analog of this as sea-shell shaped almost-concentric shells spiraling out from a region?

In other words, is there a packing consisting of of sea-shells, that satisfies whatever properties we'd like in terms of distributions of integers put on each "leaf" of the sea-shells?

If what we were considering initially was an actual spiral, e.g., $r(\theta)=\theta$, I would say something like the map in spherical coordinates $r(\theta,\phi) = \phi$ 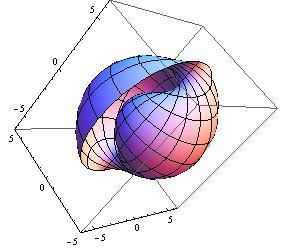 which is a 2-dimensional "leaf" generalizing the spiral from before, which one could presumably tile similarly to the original spiral? Or tile subject to packing conditions?

This seems more in line with a good generalization of the "spiral" nature of this problem, as opposed to thinking or putting points on concentric spheres. But I don't see an obvious way to define this in a natural way that automatically makes the sea-shell shells "almost" shells in the same way as the spiral does this, nor a "natural" one that has the $r=k^{1/3}$ dependence you want. Presumably, the natural conditions would be more obvious if the "good" properties of the spiral you want to keep are more clearly stated? It seems 3d is not constrained enough by the definition in terms of only radii and angles to come up with a unique "obviously correct" solution.

Think of the sunflower as a series of almost-triangles of increasing size centered on the central point, with integers at each of their points.

It's a couple steps more complicated, but try starting with a tetrahedral arrangement around the initial point. This arrangement has four natural gaps, which 5 through 8 can go into. I'm sure there's some rational way, from here, that consecutively larger almost-tetrahedrons can be put together around the central point. It might not have some of the more interesting properties of the sunflower sequence, and it's possible that it has arbitrary (or just wrong) elements, but it has the benefit of being scalable to n dimensions (if it works at all).

I think a good reference for this is "The discrepancy method" by Bernard Chazelle, page 59 and following. It's available at http://books.google.com/books?id=dmOPmEh6LdYC&printsec=frontcover&dq=the+discrepancy+method&hl=en&ei=WvqgTO7xLIXKOLzCxa4M&sa=X&oi=book_result&ct=result&resnum=1&ved=0CCkQ6AEwAA#v=onepage&q&f=false to read. Chapter title is "An orbital construction for points on a spehere", and the method is compared to $\phi$ for the circle.

Not the answer you're looking for? Browse other questions tagged mg.metric-geometry spherical-geometry or ask your own question.

5
Optimal packing of spheres tangent to a central sphere
7
Any reference to an algorithm for finding the largest empty circle on a sphere (with great-circle distance)?
17
Packing disks on a cone, or: Garlands on a tree
2
What is known about these spherical point distributions related to pinecones?
11
Sequential addition of points on a circle, optimizing asymptotic packing radius
2
Name and Algorithms for a Sparsest Circle Packing
Question feed