Why are the Julia sets so simple? (quadratic family)

I want to know why, when I look at the Julia sets of the quadratic family, I see only a finite number of repeating patterns, rather than a countable infinity of them.

My question is specifically about the interaction of these three theorems:

Theorem 1: Let $z_0\in\mathbb{C}$ be an repelling periodic point of the function $f_c:z\mapsto z^2+c$. Tan Lei proved in the 90s that the filled in Julia set $K_c$ is asymptotically $\lambda$-self-similar about $z_0$, where $\lambda$ denotes the multiplier of the orbit.

Theorem 3: $J_c$ is the closure of repelling periodic points.

Let's expand on Theorem 1:
Technically it means that the sets $(\lambda^n \tau_{-z_0} K_c)\cap\mathbb{D}_r$ approach (in the Hausdorff metric of compact subsets of $\mathbb{C}$) a set $X \cap \mathbb{D_r}$ where the limit model $X \subset \mathbb{C}$ is such $\lambda$-self-similar: $X = \lambda X$.
Practically this means that, when one zooms into a computer generated $K_c$ about $z_0$, the image becomes, to all practical purposes, self-similar. No new information is gained by zooming again about $z_0$.

Lei also proved that $K_c$ is asymptotically $\lambda$-self-similar about the preimages of $z_0$, with the same limit model $X$, up to rotation and rescaling. This means that zooming in at each point in the repelling cycle of $z_0$, provides a basically the same spectacle, apart maybe rotated, that does zooming into $z_0$. Not only, but the preimages of $z_0$ are dense in $J_{c}$ (Theorem 2), meaning that this $X$ pattern can be seen throughout the Julia set.

Now, let consider a different repelling periodic point $z_1$. Lei tells us that $K_c$ will be asymptotically self-similar about $z_1$ and all its pre-images, with an a priori different limit set $Y$. Since the pre-images of $z_1$ are also dense in $J_c$ we may observe the limit model $Y$ all over $J_c$.

So, a priori to each repelling periodic orbit, there should be an associated limit model, and each of these limit models could be distinct. However, when I look at a computer generated Julia set, the parts of it that are asymptotically self-similar, seem to approach one of a finite set of limit models (up to rotation).

Why is it so? Maybe my eye cannot see the difference? Or the computer cannot generate all of the detail?

Or is it the case that the limit models are finite? 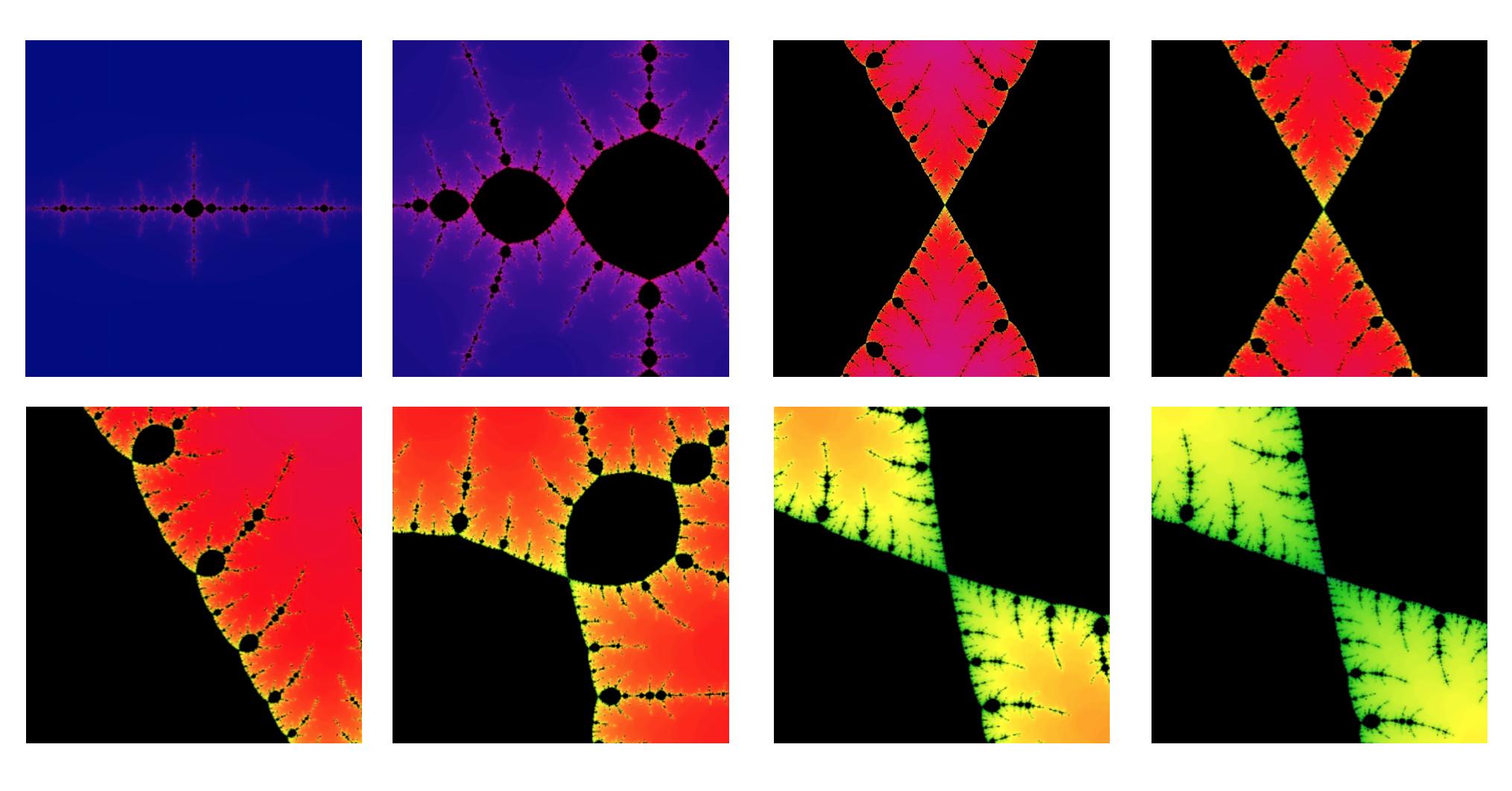 In this image (read like a comic strip), I zoom into the neighbourhood of a point, four times, then purposely "miss the center", and zoom onto a detail for four more times. The patterns that emerge are very similar. Are they the same?
This is perhaps one of the simplest Julia set, but the experience is

Given that I have started making pictures, I thought it might be worthwhile adding another, shorter, direct answer to your questions, in addition to my longer, more detailed one.

Question 1. Are the limits in your pictures the same (up to a linear map)?

Answer. Yes. The only points in your "double basilica" picture at which two bounded Fatou components (interior regions of the filled Julia set) meet are preimages of the same periodic point. (This is the $\alpha$-fixed point of the first renormalisation.) Hence the Julia set near the two points is related by a conformal map, and the two scaling limits are the same, up to a linear transformation.

Question 2. Are there only finitely many scaling limits? Answer. No. But you must focus in on different periodic points to observe them. In other words, first fix your periodic point, then zoom in.

You did not give the precise parameter for your example, but here are scaling limits for the parameter $c=-1.3$. Full Julia set: 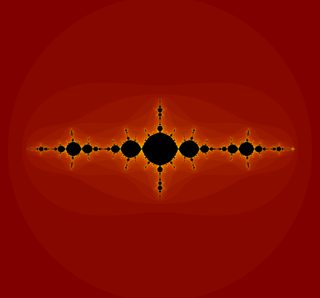 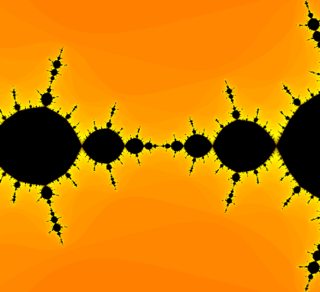 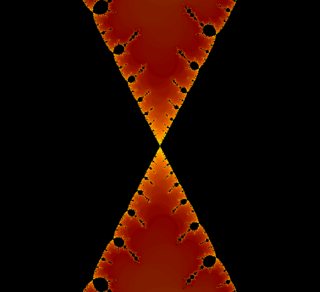 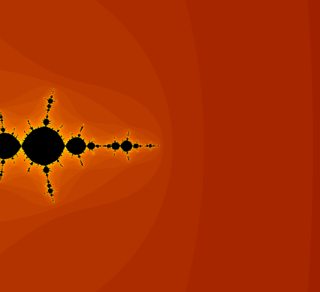 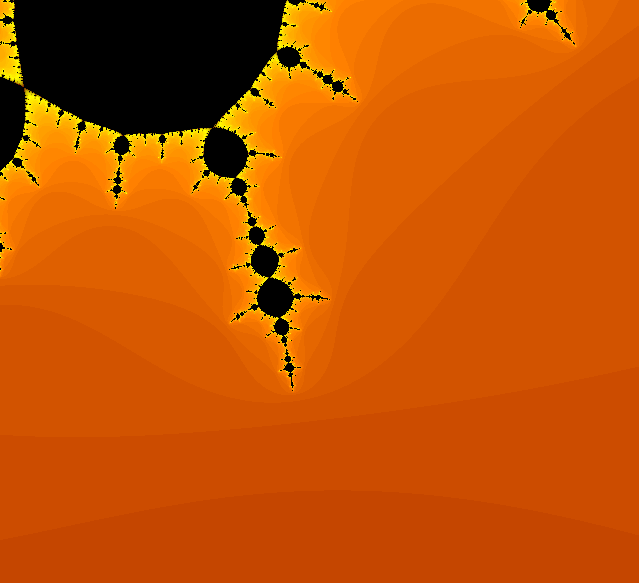 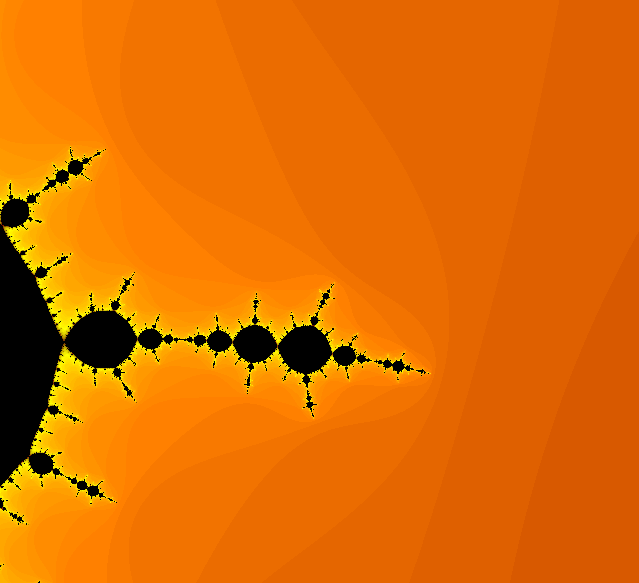 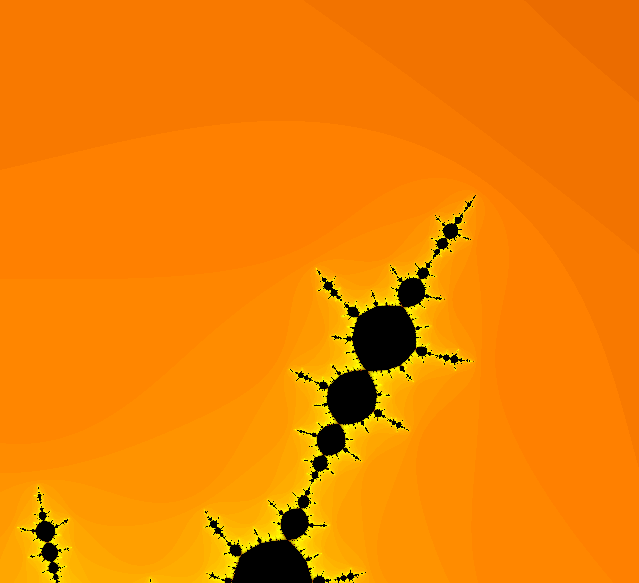 Julia sets are all very closely related to self-similar sets - each one can be thought of as the invariant set of something like an iterated function system. Specifically, the Julia set of $f(z)=z^2 +c$ is the closure of the repelling periodic points of $f$. Thus, it makes sense that the Julia set itself should be attractive under an inverse of $f$ and there are two such inverses: $$f_{\pm}^{-1}(z) = \pm \sqrt{z-c}.$$

To extend my comment and emphasize the self-similarity of Julia sets and the Dragon curve, here is an interpolation between the two.

Each frame is generated by two complex functions,

So, note that in the Dragon curve case, since $f_1$ and $f_2$ are analytic and affine, they do not distort the picture at all, so you'll see exact copies at smaller levels. In the Julia case, we only have analytic maps, so there is some distortion caused by the square root, but the picture is more or less preserved (this is the nature of analytic maps).

As @GNiklasch points out, you seem to be zooming into two places which are both preimages of the same repelling periodic point. So the images of the Julia set are locally related by a conformal map, and hence indeed asymptotically the same.

Look at this picture:

The Julia set looks different near each of these.

EDIT. You can get an even clearer example by considering infinitely renormalisable quadratic polynomials. Consider the following procedure to select a parameter. Start at c=0, the centre of the main cardioid. Then move to the centre of the period 2 bulb at the left of the cardioid (c=-1, the "basilica"). This creates a periodic point at which two dynamic rays land, and which hence separates the Julia set into (exactly) two components.

Now move through a period 3 bifurcation from this component, creating a periodic point of period 6 having three rays landing at it. (This is the component containing the "dancing rabbits" shown above.) Continue, with a period 4 bifurcation, period 5, etc.

In the limit, you obtain a quadratic polynomial having infinitely many periodic points at which the Julia set is even topologically very different, in that they separate the Julia set into different components.

(For more details, on this kind of construction, refer to Milnor's Local connectivity of Julia sets: expository lectures, Section 3.)

I remark that, for a quadratic polynomial, the only points that can have more than two rays landing, and hence separate the Julia set into more than two pieces, are preimages of repelling periodic points. Each of these is associated to some small copy of the Mandelbrot set. Hence you can only get the above type of example by having an infinite number of renormalisations. 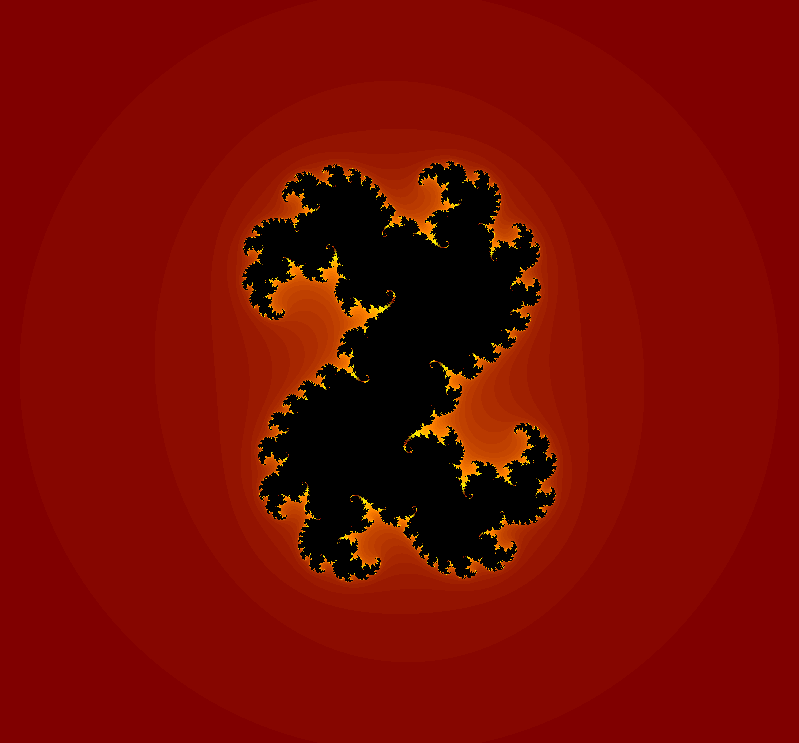 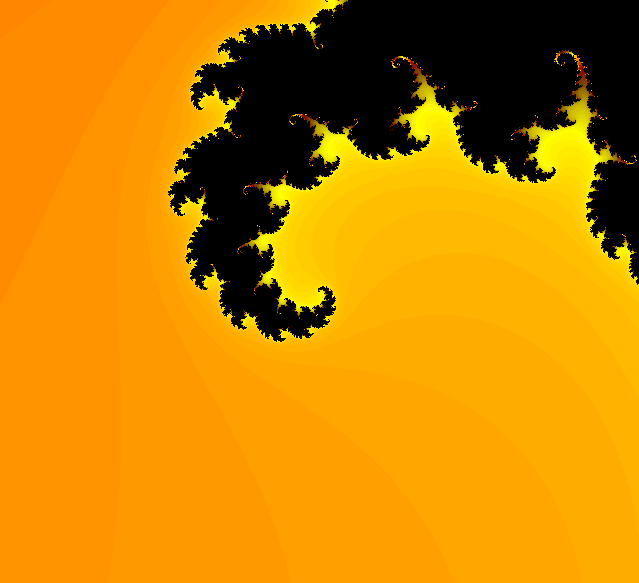 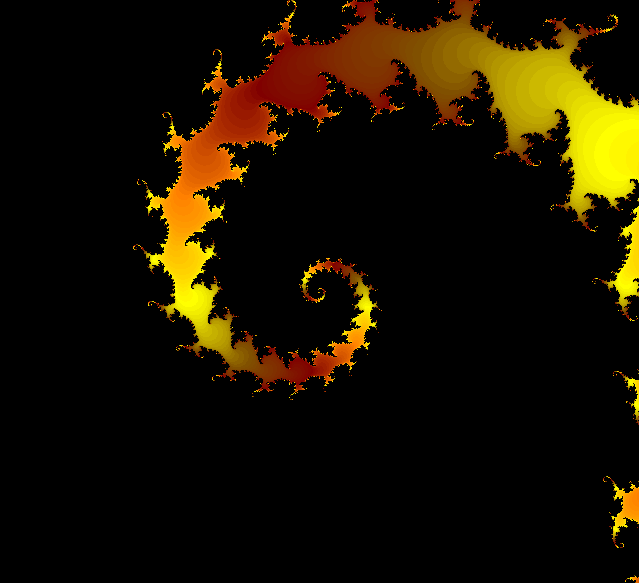 You can see that the scaling limits are very different. (Images produced using the "Winfeed" fractal program by Richard Parris, 2012 version.)

When you consider infinitely renormalizable polynomial, you can see infinitely many completely different picture. For example, there exists $c$ such that you can find periodic points $x_n$ such that $K_c\setminus \{x_n\}$ has exactly $n$ components.

10
Area of filled Julia sets
6
Symmetries of the Julia sets for $z^2+c$
9
Is this a Julia set (and if so, for which function family is it the Julia set)?
0
degree of a rational map on infinitely connected fatou component
9
When is a Newton basin fractal continuously determined by the roots of its polynomial?
7
A question about Julia set for quadratic family
5
Is the function Point -> Julia set "injective"?
5
Who proved that the Mandelbrot set's Julia sets are locally connected?
10
Convex Julia sets
Question feed