Homotopy type of some lattices with top and bottom removed

The only reaction to this question on math.SE was 21 views in 4 days, so I decided to repost it here. I am not changing anything.

There was an interesting question on MO which OP removed by some reason. Here is a (more or less) equivalent form.

Take a finite cartesian product of finite linear orders, and remove top and bottom. What is the homotopy type of the obtained poset?

When all linear orders have two elements, this is a sphere. In that question, it was conjectured that if at least one of them has more than two elements, then it is contractible. I think in fact from $3\times2\times2\times2$ one gets a (thickened) 2-sphere but I am not sure.

In general, is it known which homotopy types may occur when one removes top and bottom from a finite lattice?

In the course of answers, the following additional question became relevant (I think).

Call an element of a bounded lattice dense if it has nonbottom meet with every nonbottom element. Top is obviously such; call a dense element nontrivial if it is not top.

It is known that a finite distributive lattice (more generally a not necessarily finite pseudocomplemented lattice) does not have nontrivial dense elements if and only if it is a Boolean algebra.

Is a generalization of this known for arbitrary lattices? That is, which general lattices do not have any nontrivial dense elements?

I've posted a question about the last one, Lattices without nontrivial dense elements; it was answered by Tri. So seems like correct type of lattices to consider in this context are the geometric lattices.

Let $C(P)$ be the poset obtained by removing top and bottom from $P$ (where $P$ is a poset having a top and a bottom, not equal). Then $C(P\times Q)$ is homotopy equivalent to $\Sigma(C(P)\ast C(Q))$, the suspension of the join. Thus if one of the linear orders in your product has at least three elements then $C$ of the product will indeed be contractible, since the join of $X$ with a contractible space is always contractible. Note that the join of $X$ with the empty space is $X$.

Let me make a long comment here regarding the "q-analogue" of this question.

Now for the "$q$-analogue": take a finite field of order $q$, $\mathbb{F}_q$ and consider $V=\mathbb{F}_q^n$. Consider the lattice of linear subspaces of $V$. The chopped lattice is known also as "the spherical Tits building of $\text{PGL}_n(\mathbb{F}_q)$". Its homotopy type is considered in the Solomon-Tits Theorem which tells that it is a bouquet of $S^{n-1}$ spheres.

Note that for $n=1$ the $q$-case degenerates to the first: you get the same lattice.

Repeat this with arbitrary $n$: Let $M=\oplus_{i=1}^n \mathbb{Z}/p^{k_i}$ and consider the lattices of subgroups (or $\mathbb{Z}_p$-submodules). One may think of this lattice as the "$p$-analuge" of the one considered in the original post. It turns out (and this is shown in comments and in other answers) that this lattice will be contractible provided for some $i$, $k_i>1$.

Comments to the question contain several contributions to alternative approaches by Uri Bader. Since the latter seems to be reluctant to collect them into an answer, I decided to do the part I understand. 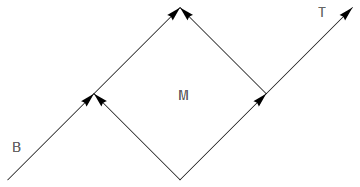 Now invoking the comment by Richard Stanley - in case $L$ is distributive, it has no nontrivial dense elements if and only if it is a Boolean algebra.

A natural question here is whether a characterization is known of those general (non-distributive) lattices which do not possess nontrivial dense (neither codense) elements.

Note that for non-distributive lattices generality of this approach is somehow orthogonal to that in Tom Goodwillie's answer: the latter works for products of not necessarily lattices having tops and bottoms, while here one approaches lattices which might not decompose into products.

In this connection there was a very interesting comment by Dan Petersen which has been elucidated by Uri Bader, but unfortunately I do not know this area well enough to say anything definite. The way I understand the idea is to consider homotopy types arising from lattices constructed in the same way in different characteristics as sort of "$q$-analogues", that is, families of homotopy types depending on a "modular" parameter encoded in $q$. I don't really know what that means that I wrote.

Finally, - it might be true that face lattices of polytopes with top and bottom removed actually have the same homotopy types as the polytopes themselves. Does anybody know anything about it? Just a couple of considerations: if this is the case then obviously the answer to my second question is that any homotopy type of a finite CW-complex may occur. Indeed if I am not mistaken already simplices of the second barycentric subdivision of any CW-complex form a (topless) lattice. Note also that for a poset one possible version of the barycentric subdivision is formed by linearly ordered subposets, and maximal such are not altered if one removes top and bottom...

Not the answer you're looking for? Browse other questions tagged reference-request co.combinatorics homotopy-theory lattice-theory or ask your own question.