Q: Is there a known asymptotic estimate for this expression? (Or does someone know how to prove one?)

ADDED: Since I got one answer suggesting the asymptotic estimate lying close to 1, I'll add a few comments here as to why I anticipate the asymptotic estimate to converge to zero. First of all, the number of divisors of $P(\sqrt{x})$ grows as $2^{\pi(\sqrt{x})}$. The number of these divisors that are smaller than $x$ only grows polynomially (presumably read this on Terence Tao's blog, but might be wrong—anyhow seems consistent with numerical data), so that eventually, this subset of divisors has measure zero compared to the full set. Also, for any fixed divisor $d$, the probability of $(n, P(\sqrt{x})) = d$ is
$$ \prod_{p\mid P(\sqrt{x})}{\left(1-\frac{1}{p}\right)} \prod_{p\mid d}(p-1)^{-1}, $$ which goes to zero as $x$ goes to infinity. It therefore seems reasonable that the probability of $(n, P(\sqrt{x})) \leq x$ should tend to zero, albeit slowly. This result would also seem in accordance with the Erdös-Kac theorem, stating the number of divisors of $n$ has asymptotic mean equal to $\log \log n$. I've added some numerics below that might be suggestive in the direction I've described. 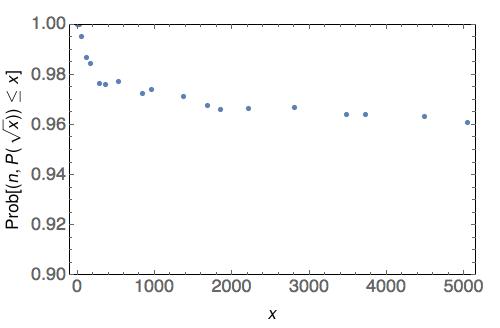 Denote $f_p(n)=\log(p)\cdot {\textbf 1}_{p|n}$. Your event is $\sum_{p^2<x} f_p<\log x$. The random variables $f_p$ are independent, so this is a sort of law of large numbers for not identically distributed, but still independent random variables.Sum of means grows as $\log(x)/2$, thus your probability should be close to 1.

We can show at least that your expression tends to a constant strictly greater than $0$. (Well, what we'll actually show is that its lim inf is positive.)

Not the answer you're looking for? Browse other questions tagged nt.number-theory prime-numbers analytic-number-theory or ask your own question.