I was wondering what an equivalent of the Collatz conjecture might be for finite fields. In a Collatz sequence a number is moved down within a set $\{2^k n : k \in \mathbb{Z}^* \}$ for some odd $n$ or jumped to another such set via $n \mapsto 3n+1$. The analogy of the sets $\{2^k n \}$ in $F_p$ are the cosets of the cyclic subgroup $\langle 2 \rangle$ of $F_p^\times$ generated by $2$. The analogy of the operation $n \mapsto 3n+1$ would be some operation that maps one such coset to another.

I came up with the following two conjectures, the first and stronger of which I've disproved by a couple of counterexamples and the second and weaker of which I've verified for all primes $p$ and prime powers $p^k$ less than $500,000$. Before going into the details, my question is - are these conjectures:

Very frequently (a little less than half the time for primes under 40k) the conjecture is trivial because 2 is a generator of $F_p^\times$. A nontrivial example is $p = 8233$, for which one such progression is

In the weaker conjecture the sequence is not required to be a direct progression. Instead there must be a way to traverse the cosets by repeatedly going from some element $g$ in a coset $n \langle 2 \rangle$ to another $3g+1$ in the next coset $n' \langle 2 \rangle$:

I've used the graph language mostly because it was convenient and because I think a good implementation in C++ of a check of this conjecture needs to use a graph structure to be efficient.

You can find the C++ code I've written to test this here:

1) If $3\nmid m$ then this directed graph is strongly connected (in the sense that there is a directed path from any vertex to any other vertex).

Both of these are special cases of the Theorem proved below.

Shifting by $1/2$, one sees that the map $x\mapsto 3x+1$ is conjugate to multiplication by 3. It is periodic with period the multiplicative order of 3. Therefore, strong conjecture cannot hold if this order is strictly less than the number of cosets of $\langle 2\rangle$ --- there are just too many cosets to visit. This presumably explains your counterexamples with "unusually high" number of cosets.

I'm caching in the work I did with the Boost Graph Library to post a few examples as a supplement to the accepted answer. The code is available at this GitHub page. The theorem in the accepted answer shows that for any odd $m$ that is not a multiple of 3, the graph formed of the cosets of $\langle 2 \rangle$ in $\mathbb{Z}/m\mathbb{Z}$ (including ones consisting of by zero-divisors) is strongly connected. One example for $m=8233$ is shown here: 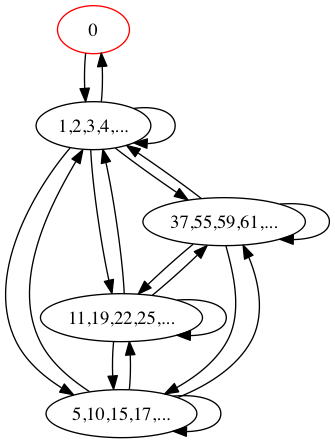 The node colored red is a "fake" cosets consisting of zero-divisors. In this case each node is connected to every other node, except for the {0} node. This is not always the case. For $m=31$, for example, some nodes are separated by two other nodes: 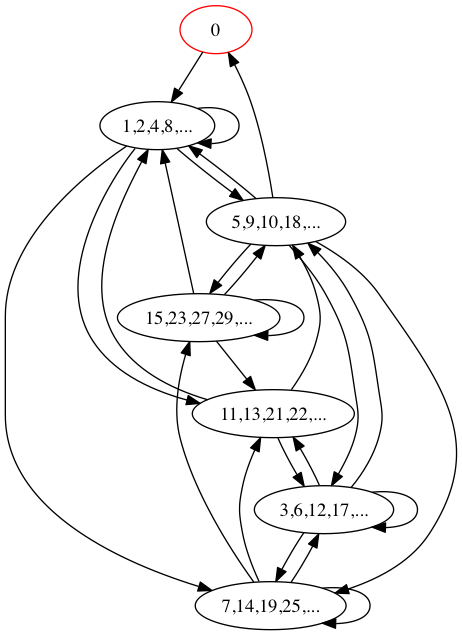 For $m=127$, two pairs of nodes are separated by three intermediate nodes, though its hard to see: 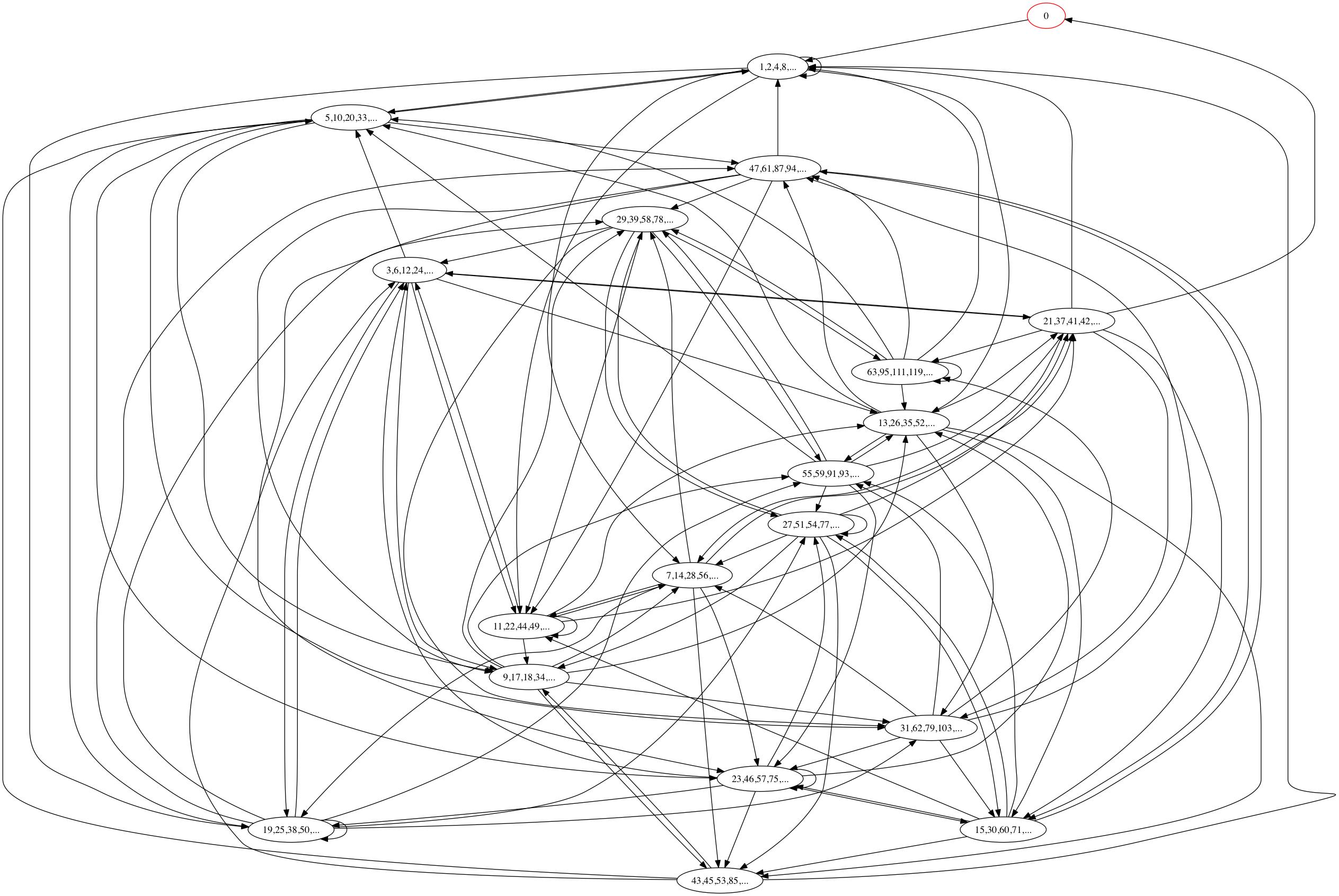 The theorem in the accepted answer gives an upper bound on these distances related to the order of 3 in $(\mathbb{Z}/m\mathbb{Z})^\times$ and the number of binary digits required to represent every number in the ring. 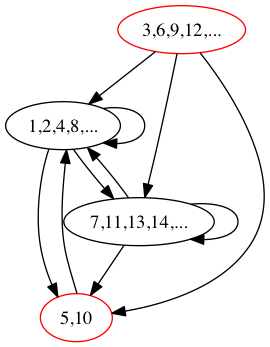 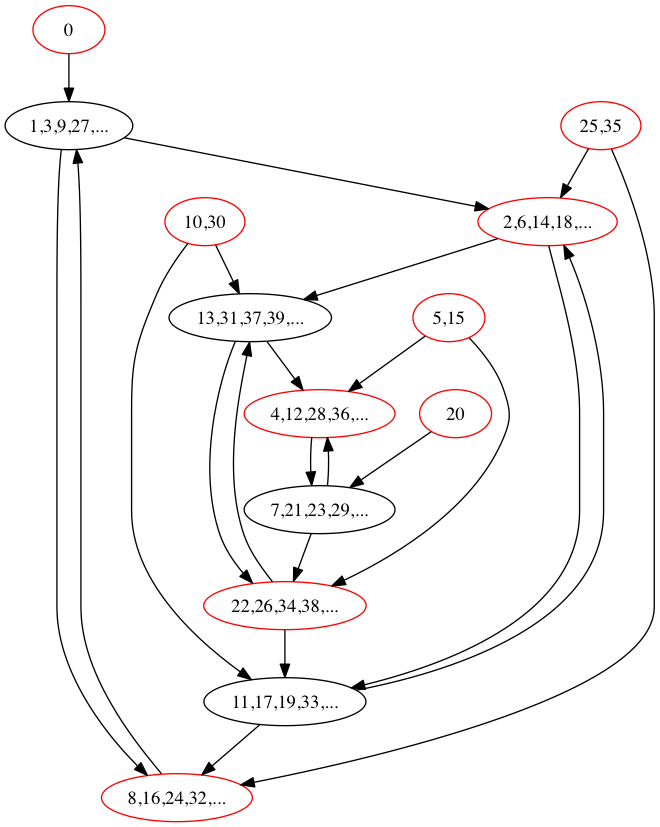 A much more interesting property would be a well-defined rule to pick a single element of each coset such that the corresponding graph is strongly connected. This would greatly prune the number of edges (allowing only one path out of each coset), and be closer to the spirit of the Collatz conjecture where $3x+1$ is only applied to numbers that aren't divisible by 2.

13
Conjectures on iterated polynomial maps on finite fields
2
Do more than three integers $n$ have divisor sums which are odd squares?
9
Elliptic-curve related equivalence between fields of different characteristic?
8
For which primes does this iterated function act transitively? (Sort of a finite analogue of Collatz conjecture.)
0
Permutations of squares and finite fields
5
Weak Goldbach conjecture with distinct primes for odd integers between $4\times 10^{18}$ and $10^{27}$
Question feed