When is a mapping the proximity operator of some convex function?

N.B: Of course it's necessary that $p$ be firmly-nonexpansive, and have other classical properties of prox operators.

Motivation: In regularization techniques for signal / image processing, one usually proposes to minimize an energy of the form $f(x) + g(x)$, where $x=x^*$ is the image to be recovered from noisy / corrupted measures, $f(x)$ is a data fidelity and measures the "fit" of the model, while $g(x)$ is a regularization term that imposes some structural constraints. For example, one can take $f(x) = \frac{1}{2}\|y-Ax\|_2^2$, under a additve Gaussian-noise assumption, where $y$ is the observed image and $A$ is a sensing linear operator, so that $y \approx Ax + \text{ noise}$, etc., etc.

A brilliant idea that has been proposed in Social Sparsity! is to impose the penalty $g$ only implicitly, by instead constructing its proximal operator $p(x)$, i.e by stating the intended shrinkage action of $g$ on the model coefficients $x_j$.

For a concrete example, think of a (fictional) world in which we didn't know about the $\ell_1$ norm, but instead decided to invent the Lasso by stating that the prox of the (unknown) $\ell_1$ penalty should shrink the coefficients according to the soft-thresholder $$(p(x))_j = st_{\lambda}(x_j) = sign(x_j)(|x_j| - \lambda)_+,$$ 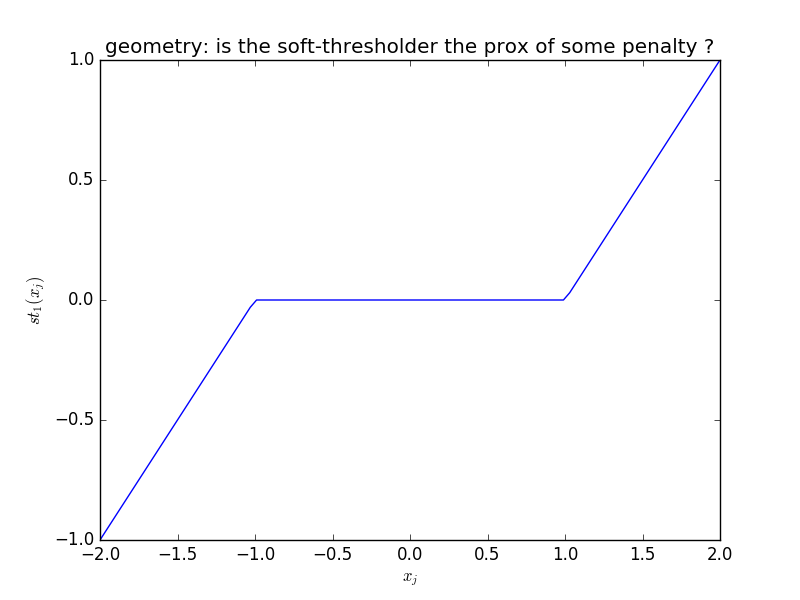 The question is then: How to show that $st_{\lambda}$ actually corresponds to the proximal operator of some penalty function.

You may be interested in the characterization of proximity operators (of convex or nonconvex functions) provided in the paper https://hal.inria.fr/hal-01835101

Here $\mathcal{H}$ is any Hilbert space, finite or infinite dimensional.

In practice, it may not always look straightforward to check that $f$ is a subdifferential (this is related to notions such as cyclic monotonicity). Luckily this is easier when $f$ is $C^1$ (Theorem 2): when $f$ is $C^1$, it is the proximity operator of some $\varphi$ if, and only if, its differential $Df(y)$ is symmetric positive semi-definite.

it is shown that every non-expansive mapping for $\newcommand{\RR}{\mathbb{R}}\RR$ to $\RR$ that is also a subgradient of a proper, convex, lsc function in indeed a proximal map.

In higher dimensions this is not true anymore (and the former paper gives a counterexample).

Also, I am not really sure, what kind of answer you would satisfying. Here's a charcterization: A map $P:\RR^n\to\RR^n$ is a proximal map, if and only if it's (probably set-valued) inverse minus the identity is a subgradient of a proper, convex, lsc function. In other words: If and only if $P^{-1}-I$ is maximally monotone. But well, this is basically the definition read backwards…

Not the answer you're looking for? Browse other questions tagged reference-request fa.functional-analysis convex-analysis signal-analysis image-processing or ask your own question.