There are $n$ non-intersecting strings (with ends $x_1,\dots, x_n$ and $y_1,\dots, y_n$). An additional string intersects the first $n$ strings somehow. All the intersections are simple (vertices of degree $4$). The edges incident to an intersection points are divided into two pairs of opposite edges (two opposite edges in a pair belong to the same string).

We consider sets of $n$ paths in the graph formed by these $n+1$ strings which have three properties: 1) paths have the same ends as the original $n$ strings (i.e. each path connects $x_i$ with $y_i$ for some $i$);
2) paths have no common edges;
3) paths can have common vertices but their intersections are not transversal. Two path intersect transversly if each path contains a pair of opposite edges at the intersection point. In this sense, the intersections of the additional string with the other strings are all transversal.

Is there a number $N=N(n)$ such that if the number of intersections of the additional string with the other strings is greater than $N$, we can find a set of $n$ paths that satisfies the conditions and differs from the original strings?

The example below presents a configuration where there are two different sets of paths (the original strings (left) and an alternative set of paths (right)).

Warning: the example is braid-like since all the strings are monotonic, but in general case the additional string can go up and down at its discretion. 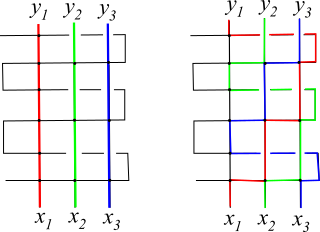 While that construction answers the question as it has been posed, I strongly suspect that the PO had something different in mind.

What seems more interesting is the question for the minimal height (i.e. vertical distance between $x_i$ and $y_i$) for paths that contain a given sequence of horizontal permutations of the colors of vertical segments; here the key observation seems to be that the height difference between permutations, that are adjacent in the sequence, equals the maximal "left-shift" of a color between those permutations.

3
How many double paths in a grid?
0
Minimize overlap penalty between paths in graph
1
Maximum number of four cycles with no intersecting three vertex paths
4
Closed paths, traces and spectra
Question feed