Let $\Delta$ be a simplicial complex (or more generally, a regular CW complex). Let $\mathcal{M}$ be a Morse matching (or equivalently, a discrete Morse function) on $\Delta$.

By Forman's theorems, $\Delta$ is homotopy equivalent to a CW-complex whose cells are $\mathcal{M}$-critical (=unmatched) simplices. Its homology is computed from the chain complex, in which an entry of the $k$-th boundary matrix equals the sum of signs of all zig-zag paths (=directed paths in the Hasse diagram of $\Delta$ with the edges from $\mathcal{M}$ reversed) between a critical $k$-cell and critical $k\!-\!1$-cell. 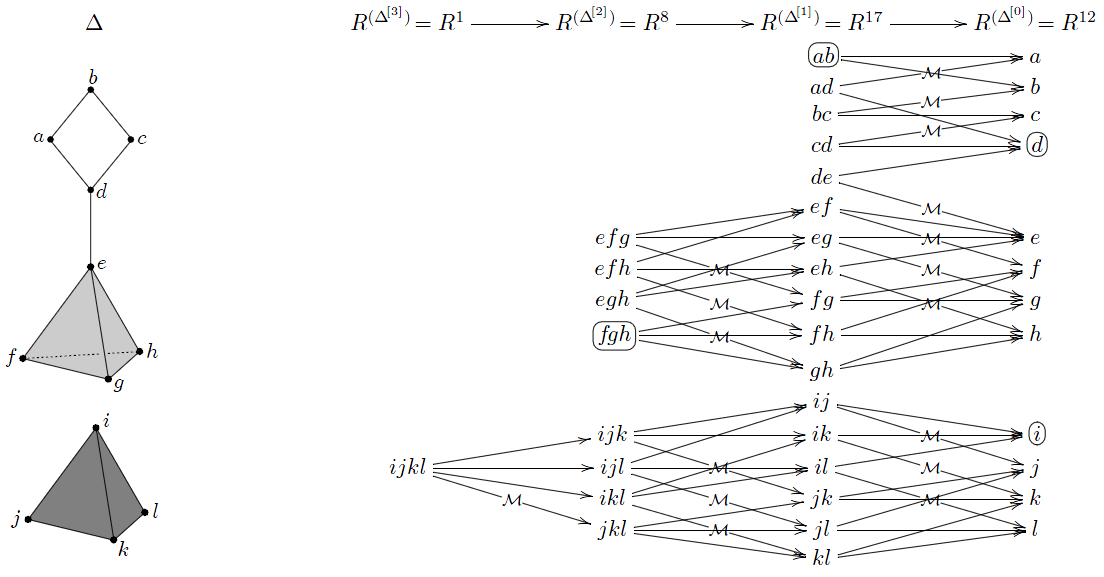 Do zig-zag paths determine how the critical cells are glued onto each other?

A CW-complex $X$ is determined, up to homotopy, by the number of cells in each dimension, and the homotopy class of each gluing map $S^k \!\longrightarrow\! X^{(k)}$.

I suspect this to be true. More intriguingly:

In general, the homotopy groups of spheres are not all of the form $\mathbb{Z}_m$, so probably summing the signs of zig-zag paths is not sufficient, i.e. some information is lost when applying the matching. For instance, if critical cells are of dimension $1,4,8$, then gluing maps are determined by equivalence classes in $\pi_7(S^4)\cong\mathbb{Z}\!\oplus\!\mathbb{Z}_{12}$. Furthermore, the gluing maps of $k\!+\!1$-cells go into the $k$-skeleton, so they are determined by their representatives in $\pi_k(X^{(k)})$, but according to Mihai Damian, On the higher homotopy groups of a finite CW-complex, Topology Appl. 149 (2005), no. 1-3, 273--284., a homotopy group of a finite CW-complex may be infinitely-generated!

Thanks to Cosheaf Overlord Justin Curry for bringing this question to my attention. I'm only going to address the first question here, and I think with some computations (whose complexity depends on your individual complexes) you can extract answers to the other two questions yourself.

There is a very precise relation between zigzags of an acyclic partial matching $\mathcal{M}$ and the homotopy type of $\Delta$, namely:

There exists a poset-enriched category whose objects are the $\mathcal{M}$-critical cells, whose morphisms are equivalence classes of zigzags where only arrows in $\mathcal{M}$ can point backwards, and whose classifying space is homotopy-equivalent to $\Delta$.

All details are in the preprint here; the category mentioned above is a discrete analogue of the flow category described by Cohen, Jones and Segal in this paper.

Here is a brief summary of how to prove the result: given a regular CW complex $\Delta$ one has the "entrance path category" $E_\Delta$ whose objects are the cells and morphisms $E_\Delta(x,y)$ are descending sequences of faces $(x > z_0 > \cdots > z_n > y)$. You compose by concatenation, and note that these descending sequences have a poset structure (by inclusion of subsequences) where $(x > y)$ is minimal in $E_\Delta(x,y)$ if $x \neq y$ and $(x)$, which serves as the identity, happens to be unique and therefore minimal in $E_\Delta(x,x)$. Regularity guarantees that the classifying space of $E_\Delta$ lies in the homotopy class of $\Delta$.

Now, every acyclic partial matching picks out a class of minimal morphisms $\{(x_\bullet > y_\bullet)\}$ which I'll call $\mathcal{M}$. And the zigzags you see are precisely the sorts of morphisms which arise when you localize about (i.e., formally invert) elements of $\mathcal{M}$ in the poset-enriched category $E_\Delta$. Call this localized poset-enriched category $E_\Delta[\mathcal{M}^{-1}]$ and consider its full subcategory $C_\Delta(\mathcal{M})$ whose objects are the critical cells. Here's the main result of that preprint:

The proofs of both equivalences require investigating fiber 2-categories and the appropriate use of Quillen's Theorem A. Things get slightly technical, but you can find an explicit computation in Sec 7.1 of the preprint. In any case, one immediate corollary is the quoted theorem above.

In the paper Tame flows I have investigated a special class of gradient like flows.

The Conley index theory of such flows is particularly easy to describe and leads to a result that generalizes the well known theorem in Morse theory stating that "crossing a critical point amounts to attaching a cell of appropriate dimension''; Sec. 9 and 10 of the above paper.

In Sec 11 I show that an injective function $f$ from the faces of a simplicial complex to the reals naturally defines one such flow. The function $f$ extends naturally to a Lyapunov function of the flow. The faces of the complex are invariant subsets of the flow and stationary (or critical) points of the flow are the barycenters of the faces. In particular such a function leads to a homotopical reconstruction of the space different from the one given by the simplicial decompositions. The attaching spaces when crossing a critical point can be identified naturally with the unstable variety of that point which is a conical subcomplex that has an explicit combinatorial description in terms the function $f$.

The Morse-Forman functions are assignments of numbers to faces of a simplicial complex and the gradient-like flow determined by a Morse-Forman assignment has one appealing property: the Conley index of the barycenter of a Forman non-critical face is homotopically trivial, while the Conley index of the barycenter of a Foreman critical face is of sphere of dimension equal to the dimension $k$ of the critical face. Crossing such a critical point corresponds to attaching a disk of that can be canonically identified with the critical face. The precise details are in Sec 9-11 of the above paper.

I want to mention one other thing. In Sec 11 I tried, with modest success, to address one limitation of Morse-Forman theory, namely the scarcity of Morse-Forman functions. Usual Morse functions on smooth manifolds are "a dime a dozen" in the sense that generic smooth functions are Morse or, better yet, a smooth function is "almost surely" Morse. In the discrete case, the probability that a random assignments of numbers to faces yields a discrete Morse function is very small, in fact exponentially small in the number of faces.

Not the answer you're looking for? Browse other questions tagged at.algebraic-topology homotopy-theory discrete-morse-theory or ask your own question.

2
Closure of the homotopy relation for a simplicial set
4
Discrete Morse theory and existence of minimal complex
0
Morse matching with 0-cells and (n-1)-cells
27
What's special about the Simplex category?
15
Higher Cerf Theory
8
Generalize $\pi_0(B\mathcal{C})\cong\{\text{objects}\}/\{\text{morphisms}\}$ to categories internal to topological spaces
3
Is there discrete Morse theory on acyclic categories?
Question feed