The spectral theorem states if $A$ is a Hermitian operator acting on an $n-$dimensional Hilbert space space $H$, and $\lambda_1, ... \lambda_m$ are $m \leq n$ distinct eigenvalues of $A$, then

where $H_i$ are the corresponding eigenspaces, and in turn

where $P_i$-s are the corresponding projections. It is known that the spectrum of a Hermitian operator acting on a finite-dimensional Hilbert-space can be computed provided that its cardinality is known beforehand, or, alternatively, that for each pair of eigenvalues $\lambda_i, \lambda_j$, it is known whether $\lambda_i = \lambda_j$ or $\lambda_i \neq \lambda_j$. It is a crucial condition when we try to build a computable foundation of quantum mechanics since deciding which eigenvalue is actually measured essentially defines what eigenspace the system falls into after the measurement. The problem of degeneracy is described in Bridges and Svozil, 2000 in the following example: 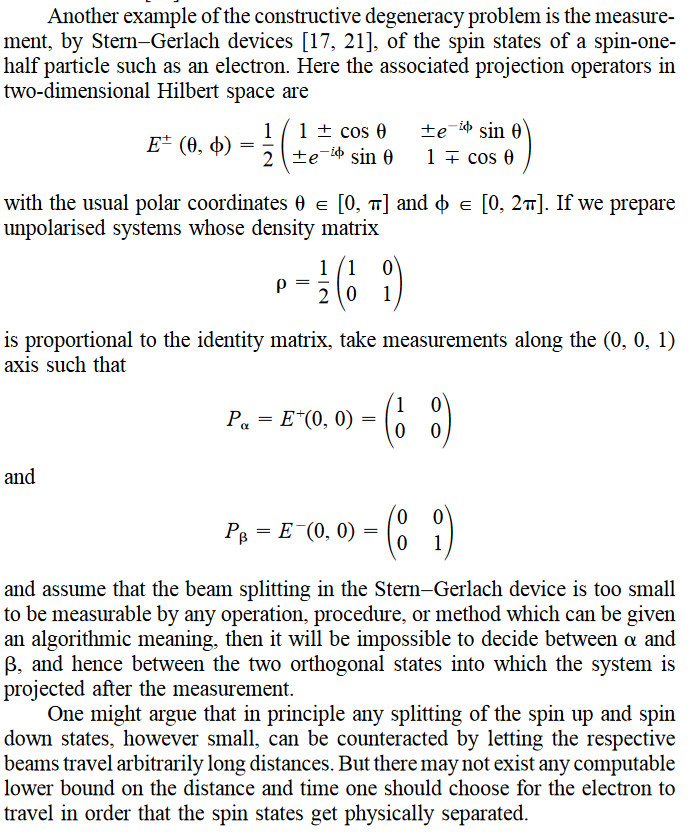 Under this link, I came across this book of Ye where he explains the degeneracy problem as follows:

The representation in [when $\forall i,j. \lambda_i \neq \lambda_j \lor \lambda_i = \lambda_j$] above is exactly the same as the classical case. It seems that indistinguishable $\lambda_i$-s arise only in artificial constructions. In other words, we expect that the operators on finite-dimensional spaces appearing in natural physics contexts all satisfy the condition $\forall i,j. \lambda_i \neq \lambda_j \lor \lambda_i = \lambda_j$. Because, in quantum mechanics, the spectrum of an operator A is supposed to consist of the possible values of the observable corresponding to A. Any realistic observation can be performed only up to a finite precision. So, in a finite dimensional case, we can expect that the eigenvalues are all mutually distinguishable.

What is actually behind such a justification and what does it have to do with the fact that each measurement can be done up to a finite precision?

I also have a side question regarding the following theorem of Ziegler and Brattka (2001):

where a matrix is called computable iff the corresponding linear map is computable. How does this fact enable us to reconstruct exactly the classical theorem? I can't see how we'd obtain the cardinality of the spectrum just from the condition that $A$ be computable (normal) matrix.

WARNING: there is no such a corollary in the preprint!

However, in "real-life" or "natural" situations, we should expect eigenvalues to be distinct unless they have a good reason (typically involving a symmetry) to be equal.

The situation in Corollary 15 is different: there is no requirement here for the $\lambda_j$ to be distinct.

EDIT: In fact, Corollary 15 is false. Consider the family of $2 \times 2$ matrices

Not the answer you're looking for? Browse other questions tagged computability-theory hilbert-spaces quantum-mechanics constructive-mathematics or ask your own question.

2
Infinite hermitian matrix
2
Continuous Measurement in Quantum Mechanics
13
Is zero a hydrogen eigenvalue?
2
Perturbation theory of eigenvalues - Effects of degeneracy/ multiplicity
3
Average entropy of quantum system in bipartite pure state for finite temperature
6
Path integral as quantum mechanics on the tangent bundle
21
Rigged Hilbert spaces and the spectral theory in quantum mechanics
1
limit of Riemann-Stieltjes sums as an integral on $\mathscr{H}$
2
Has the von Neumann entropy ever been used in classical mechanics?
Question feed