The first thing to say is that this is not the same as the question about interesting mathematical mistakes. I am interested about the type of false beliefs that many intelligent people have while they are learning mathematics, but quickly abandon when their mistake is pointed out -- and also in why they have these beliefs. So in a sense I am interested in commonplace mathematical mistakes.

Let me give a couple of examples to show the kind of thing I mean. When teaching complex analysis, I often come across people who do not realize that they have four incompatible beliefs in their heads simultaneously. These are

Obviously, it is (ii) that is false. I think probably many people visualize the extension of $\sin z$ to the complex plane as a doubly periodic function, until someone points out that that is complete nonsense.

A second example is the statement that an open dense subset $U$ of $\mathbb{R}$ must be the whole of $\mathbb{R}$. The "proof" of this statement is that every point $x$ is arbitrarily close to a point $u$ in $U$, so when you put a small neighbourhood about $u$ it must contain $x$.

Since I'm asking for a good list of examples, and since it's more like a psychological question than a mathematical one, I think I'd better make it community wiki. The properties I'd most like from examples are that they are from reasonably advanced mathematics (so I'm less interested in very elementary false statements like $(x+y)^2=x^2+y^2$, even if they are widely believed) and that the reasons they are found plausible are quite varied.

I got 2 well earned downvotes for a false belief I claimed proudly, it is time to balance that by exposing it here:

Of course this is a particular case of a very general fallacy: by extending $\le$ into $\le^*$ one weakens both the conclusion and the premise of the implication, so that there is no general relation between orders that extend one another.

A false belief that I held until very recently, was that for a surface embedded in a three-manifold, orientability was the same as two-sidedness. However, it turns out that if the ambient manifold is not orientable, you can embed a torus so that it is one-sided, and a Möbius strip or a Klein bottle so that it is two-sided.

This picture, from Weeks' wonderful The shape of space, shows a two-sided Klein bottle embedded in a product of a Klein bottle and a circle, by identifying sides as indicated by the arrows. 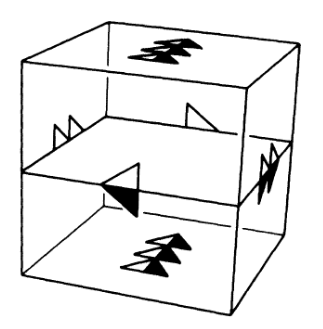 This one shows a torus embedded single-sidedly in the same 3-manifold. 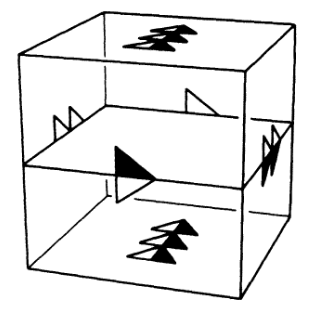 To my knowledge, noone has proven that the scheme of pairs of matrices (A,B) satisfying the equations AB=BA is reduced. But whenever I mention this to people someone says "Surely that's known to be reduced!"

(Similar-sounding problem: consider matrices M with $M^2=0$. They must be nilpotent, hence have all eigenvalues zero, hence $Tr(M)=0$. But that linear equation can't be derived from the original homogeneous quadratic equations. Hence this scheme is not reduced.)

It always confused me as an undergraduate that $\mathbb{Q}\subset\mathbb{R}$ has an open neighborhood $N_\epsilon \supset\mathbb{Q}$ of arbitrarily small measure $\epsilon$, because $\mathbb{Q}$ is dense in $\mathbb{R}$.

The quaternions $\{x+yi+zj+wk\mid x,y,z,w\in \mathbb{R}$} is a complex Banach algebra (with usual operations). Hence it is apparently a counterexample to the Gelfand-Mazur theorem

So, what is the error?

The error is the following:

However the quaternions, being a skew field extention of the field of complex numbers, is a vector space over the field of complex number and it is also a ring, but there is no compatibility between scalar multiplication and quaternion multiplication). So it is not a complex algebra. This shows that in the definition of a complex algebra $A$, the commutative condition $\lambda (ab)=(a)(\lambda b),\;\;\lambda \in \mathbb{C},\;\;a,b\in A$, is very essential.

By googling one sees that each of the following statements has a significant number of believers:

(5) the statement "the empty set is a basis of {0}" is an immediate consequence of the definitions of the terms involved.

A stunning, ignorance-based false belief I have witnessed while observing a class of a math education colleague is that there is no general formula for the n-th Fibonacci number. I wonder if this false belief comes from conflating the (difficult) lack of formulas for prime numbers with something that is just over the horizon of someone whose interests never stretch beyond high-school math.

Behind a number of the elementary false beliefs listed here there is a widespread tendency among people to give up too easily (maybe when having to read at least to page 2 in a book), or to nourish an ego that allows to conclude that something is impossible if they cannot do it themselves.

I confess that I didn't carefully comb through all the answers, although I've read through this thread a few times in the past. So maybe these are repeats.

One of my professors in graduate school (quite a well-known and strong mathematician actually) insisted on the first, and quite a few people here at MO have mistakenly believed the second before the error was pointed out.

This one has bit me and some very good mathematicians I know.

If $T$ is injective then so is $\tilde{T}$. (False! See this answer for a counterexample.)

Except this is of course wrong. For example, consider the vector space $V:=\mathbb{K}^{\mathbb{Z}}:=\{ f:\mathbb{Z}\to\mathbb{K} \}$ of uncountable dimension. The kernels of the projections $\pi_i:V\to\mathbb{K},\ f\mapsto f(i)$ are hyperplanes. Their intersection is the trivial subspace of $V$, and thus has uncountable codimension.

(Let me also mention that there are various common false beliefs about mathematical terms: NP stands for "not polynomial" [in fact it stands for "Nondeterministic Polynomial" time]; the word "Killing" in Killing form is an adjective [in fact it is based on the name of the mathematician "Wilhelm Killing"] etc.)

The following false belief enjoyed a certain success in the '70. (See R.S.Palais, Critical point theory and the minimax principle for an account.)

Regular is necessary, otherwise there are counterexamples!

The distinction between convergence and uniform convergence. It even got Cauchy in its time.

If $E$ is a contractible space on which the (Edit: topological) group $G$ acts freely, then $E/G$ is a classifying space for $G$.

A better, but still false, version:

If $E$ is a free, contractible $G$-space and the quotient map $E\to E/G$ admits local slices, then $E/G$ is a classifying space for $G$.

(Here "admits local slices" means that there's a covering of $E/G$ by open sets $U_i$ such that there exist continuous sections $U_i \to E$ of the quotient map.)

The simplest counterexample is: let $G^i$ denote $G$ with the indiscrete topology (Edit: and assume $G$ itself is not indiscrete). Then G acts on $G^i$ by translation and $G^i$ is contractible (for the same reason: any map into an indiscrete space is continuous). Since $G^i/G$ is a point, there's a (global) section, but it cannot be a classifying space for $G$ (unless $G=\{1\}$). The way to correct things is to require that the translation map $E\times_{E/G} E \to G$, sending a pair $(e_1, e_2)$ to the unique $g\in G$ satisfying $ge_1 = e_2$, is actually continuous.

Of course the heart of the matter here is the corresponding false belief(s) regarding when the quotient map by a group action is a principal bundle.

A lot of information is found on http://en.wikipedia.org/wiki/Multiplication_algorithm .

False belief: ${\cal P}(\omega)$ has only countable chains with respect to $\subseteq$.

It seems mind-boggling to me that you can start with $\emptyset$, and "add stuff" uncountably many times until you reach $\mathbb{N}$ itself! I learnt this today in a comment by Andreas Blass that he wrote referring to this question.

It took me a bit too long to realize that these two beliefs are contradictory:

(The other cycles are there of course, but they are repelling and hence are not visible. You can see artifacts from these repelling cycles near the period-doubling bifurcations in this picture)

I'm pretty sure I've heard both of the following multiple times:

Inversion is an automorphism of a group. ('Cause it, like, preserves the conjugacy classes and all that...)

" Every open dense subset of $\mathbb{R}^n$ has full Lebesgue measure. "

Here's one from basic set theory. Let k be a cardinal and consider the operation "adding k", meaning

on cardinals. We know that this operation "stabilizes" to the identity after $k$, that is, for any $l>k$, we have $l+k = l$. Similarly, the "multiplying by $k$" operation,

stabilizes to the identity after $k$.

Well, obviously "exponentiation by $\omega$" also stabilizes at some point, right? Like, $l^\omega$ is equal to $l$ for sufficiently large $l$? Look, we probably already have the stabilization point at $2^\omega$.

In a finite abelian $p$-group, every cyclic subgroup is contained in a cyclic direct summand.

Added for Gowers: Maybe one reason why people fall into this error goes something like this: First you learn linear algebra, so you know about vector spaces, bases for same, splittings of same. Then you run into elementary abelian $p$-groups and recognize this as a special case of vector spaces. Then you learn the pleasant fact that all finite abelian $p$-groups are direct sums of cyclic $p$-groups, and a corresponding uniqueness statement. You notice that all of the cyclic subgroups of order $p^2$ in $\mathbb Z/p^2\times \mathbb Z/p$ are summands, and if you have a certain sort of inquiring mind then you also notice that not every subgroup of order $p$ is a summand: one of them is contained in a copy of $\mathbb Z/p^2$, in fact in all of those copies of it. Having learned so much, both positive and negative, from the example of $\mathbb Z/p^2\times \mathbb Z/p$, you may think that it shows all the interesting basic features of the general case and overlook the fact that in $\mathbb Z/p^3\times \mathbb Z/p$ there is a $\mathbb Z/p^2$ not contained in any $\mathbb Z/p^3$.

In any case, reputable people sometimes make this blunder; it happened to somebody here at MO just the other day.

Not the answer you're looking for? Browse other questions tagged big-list mathematics-education or ask your own question.

211
Most interesting mathematics mistake?
103
Interesting examples of vacuous / void entities
109
Examples of math hoaxes/interesting jokes published on April Fool's day?
54
What are some mathematical sculptures?
178
Why doesn't mathematics collapse even though humans quite often make mistakes in their proofs?
105
Is the analysis as taught in universities in fact the analysis of definable numbers?
110
Slick proof?: A vector space has the same dimension as its dual if and only if it is finite dimensional
39
In "splendid isolation"
69
Cohomology and fundamental classes
71
When is a singular point of a variety ($\mathcal{C}^\infty$-) smooth?
See more linked questions

43
Examples of undergraduate mathematics separation from what mathematicians should know
36
On starting graduate school and common pitfalls...
103
Interesting examples of vacuous / void entities
15
Statements which were given as axioms, which later turned out to be false.
41
Famous vacuously true statements
4
Numerical equality testing
131
Nonequivalent definitions in Mathematics
22
"Non-categorical" examples of $(\infty, \infty)$-categories
48
Siegel zeros and other "illusory worlds": building theories around hypotheses believed to be false
Question feed