As the title (hopefully) suggests, I've been trying to prove (or disprove) the existence of a limiting distribution for a certain projection in a statistical physics model. I'll give the details of the model below, but if you are reading this, I'm particularly interested in proofs that seem 'quantifiable' (e.g. maybe implicitly has some estimate of distance to the limiting distribution). I think it is unlikely that anyone reading this has familiarity with the below model, so reasonable-sounding references would also be great.

The model is the infinite 'East Model', discussed in e.g. 'The Asymmetric One-Dimensional Constrained Ising Model: Rigorous Results'. For a short description, the process is on (0,1) labellings of the positive integers, and at time 0, all labels are 0 except for 1, which is labeled 1 (and for convenience we write that 0 is also labeled 0). Each positive integer k has its own Poisson-1 clock, and when the clock goes off, the label does nothing (if the label of k-1 is 0) or flips with probability 0.5 (if the label of k-1 is 1).

At each time, there is a highest non-zero entry. I am interested in the vector consisting of the labellings of the n entries below the highest non-zero entry. This vector isn't by itself a Markov chain, and if it has a limiting distribution, it isn't quite a Bernoulli process (which is the limit for the East process itself). Any insight into existence of a limit, convergence, and how it might be affected by starting in some different initial state with finitely many 1's would be welcome.

pr.probability statistical-physics markov-chains
Share
Improve this question
asked May 4 '10 at 17:58

you might get more insight with pictures: the whole process (at time when something happened at the east-end) whole process http://www.freeimagehosting.net/uploads/aefaf14d4f.png and the last $50$ non-zero sites 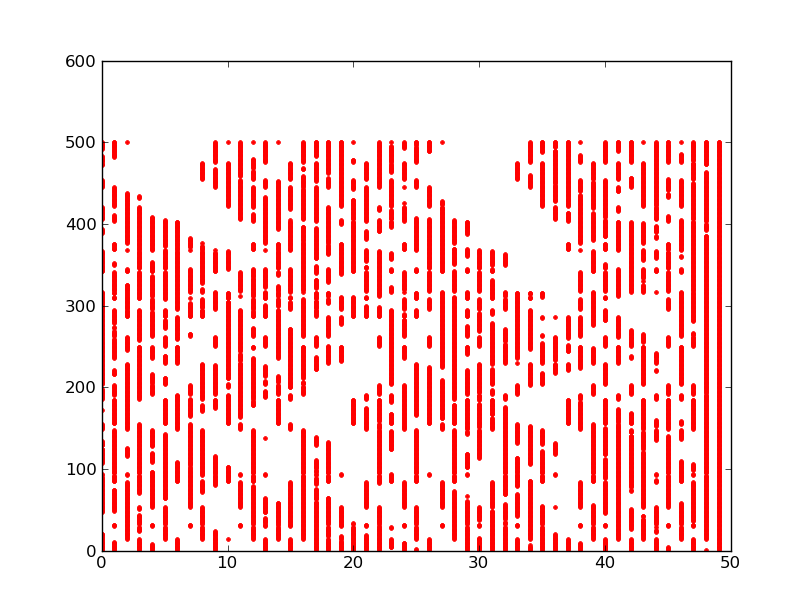 Not the answer you're looking for? Browse other questions tagged pr.probability statistical-physics markov-chains or ask your own question.