Is there a geometric construction of hyperbolic Kac-Moody groups?

Indeed it's not much of an exaggeration to say that central extensions of loop groups are to strings as simple Lie groups are to particles.

My question is whether a geometrical construction of any of the corresponding hyperbolic Kac--Moody groups is known. Since after 'particle' and 'string' one naturally says '2-brane', one might naively hope that these are connected to 2-brane theories, or perhaps 2+1-dimensional field theories. But maybe that's the wrong idea.

Jacques Tits famously gave a way to construct Kac--Moody groups, not only over the real and complex numbers but over arbitrary commutative rings:

This has been simplified for a certain class of hyperbolic Kac--Moody groups, namely the simply-laced ones:

This construction does not feel 'geometric' to me: it's in terms of generators and relations.

Just for fun, here are the Dynkin diagrams of the finite-dimensional simple Lie algebras:

Here are the Dynkin diagrams of the untwisted affine Lie algebras:

and the twisted ones: 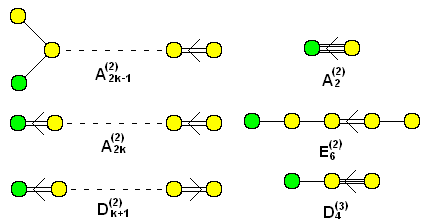 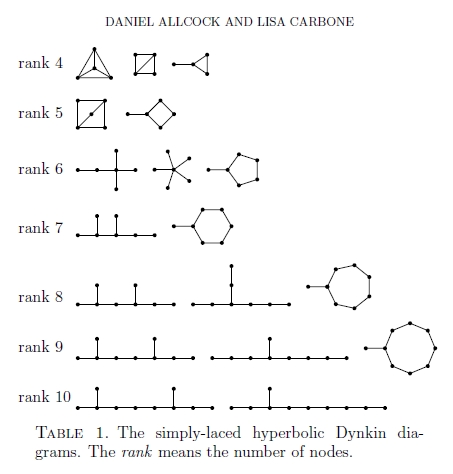 The last of these diagrams is called $\mathrm{E}_{10}$, and there are lots of interesting conjectures about its role in physics --- see Allcock and Carbone's paper for references. These could be clues to a geometric construction of the corresponding group.

Not the answer you're looking for? Browse other questions tagged dg.differential-geometry lie-groups lie-algebras or ask your own question.

5
Is the centralizer of a torus in a Kac-Moody algebra always a Borcherds algebra?
12
What are the simple Lie superalgebras of type E?
6
Getting the story of Dynkin and Satake diagrams straight
3
The normalised form for the twisted Kac-Moody algebra
2
Graph of a Lie super algebra
11
Physicists misuse the term “Kac Moody algebra”. Does that bring problems?
Question feed