Action of a strict 2-group on a category gives autoequivalences?

As I see it, the image of a strict action $\Phi$ as defined above contains not only strictly invertible endofunctors, but also potentially autoequivalences:

Let $p:E\to B$ a locally trivializable bundle with a cover $\{U_i\}$ of $B$ and typical fiber $F$ (restricting to a trivial base 2-space for the sake of simplicity).

The local triviality of this bundle is encoded in the existence of the following diagram which defines local trivializations $t_i$, and which lives in $\mathsf{Set}$: 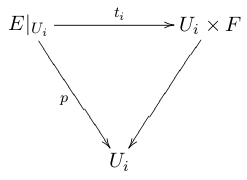 and which give the relation:

since the canonical 2-morphisms of $\mathsf{Set}$ (if considered as a 2-category) are all identities.

The categorification of the concept of locally trivializable bundle (the so called 2-bundle) lies (as pointed out in From Loop Space Mechanics to Nonabelian Strings page 46) in the replacement of the above diagram by a diagram living not in $\mathsf{Set}$ but in $\mathsf{Cat}$ (or $\mathsf{DiffCat}$ for smoothness), and since $\mathsf{Cat}$, if considered as a 2-category, possesses non-trivial natural transformations, the precedent equality becomes a mere natural transformation, in the sens that $t_i$ are in fact equivalences with weak inverses $\bar{t_i}:U_i \times F \to E|_{U_i}$, that is, there exists natural transformations $\tau$ and $\bar{\tau}$ such that:

In particular, this means that $\bar{t}$ is also an equivalence, which permits us to construct autoequivalences for double overlaps $U_{ij}$ (Higher Gauge Theory):

Since this autoequivalence acts trivially on the $U_{ij}$ factor, it will define a function $g_{ij}:U_{ij}\to\mathcal{Aut}(F)$

As defined in Higher Gauge Theory (page 19), a locally trivial 2-bundle $p:E\to B$ is said to have $\mathcal{G}$ as its structure 2-group when, in particular, the transition functions $g_{ij}$ factor through an action $\Phi:\mathcal{G}\to\mathcal{Aut}(F)$

I'm stuggling with an issue I found in Baez and Schreiber article "Higher Gauge Theory". They say (pp. 9 line 1)

For the benefit of experts, we should admit that we are only defining ‘strict’ Lie 2-groups

A (strict) action of a smooth 2-group $\mathcal{G}$ on a smooth 2-space $F$ is a smooth homomorphism,

that is, a smooth map that preserves products and inverses.

The 2-space $\mathcal{AUT}(F)$ is a kind of a 2-group, with composition of autoequivalences giving the product. However, it is not the sort of 2-group we have been considering here, because it does not have 'strict inverses': the group laws involving inverses do not hold as equations, but only up to specified isomorphisms that satisfy coherence laws of their own. So, $\mathcal{AUT}(F)$ is a 'coherent' smooth Lie group in the sense of Baez and Lauda [12].

My question: the functoriality of the action $\alpha$ should give strict inverses for endofunctors of $F$, not weak ones, because morphisms of $\mathcal{G}$ are in fact isomorphisms (they have strict inverses). Why did these authors say that the action functor will give autoequivalences of $F$? Is there something I missed?

I could be wrong (it's hard to be sure since the phrase "preserves inverses" is a bit vague), but I think that's why they said they were defining only a strict action. A weak action would only preserve products and inverses up to coherent isomorphism. So I think you are right that a (strict)e action $\alpha$ takes each element of $G$ to an auto-isomorphism rather than merely an autoequivalence. But that doesn't change the fact that $AUT(F)$ contains autoequivalences that are not auto-isomorphisms; they just can't be in the image of a strict action.

6
How can I understand the "groupoid" quotient of a group action as some sort of "product"?
4
2-groups are to crossed modules as 2-categories are to...?
10
What is descent data (of higher categories), conceptually?
15
Does the category of categories-mod-natural-isomorphism have any nonobvious autoequivalences?
2
A question on 2-bundles
9
2-natural operations on toposes
4
What is the notion of a group object and its action in a 2-category?
7
An explicit expression for the naturality of the Serre automorphism in the bicategory of algebras
Question feed