Let $T$ be a measure preserving transformation of a standard probability space $(X,\mathcal{B},\mu)$. A partition $\alpha$ of $X$ is said to be a generator for $T$ if the smallest $T$ invariant $\sigma$-algebra of measurable sets containing the pieces of $\alpha$ is all of $\mathcal{B}$.

No, this is not true. This is true if $F \subset \mathbb{N}$, but not in the general case. I am lost with the objects of ergodic theory so I start by rephrasing in the probabilistic language.

So the answer is no, and it is still no with additional assumptions such as ergodicity, $K$, Bernoullicity.

I seize the opportunity to give a try to the markovchain R package: 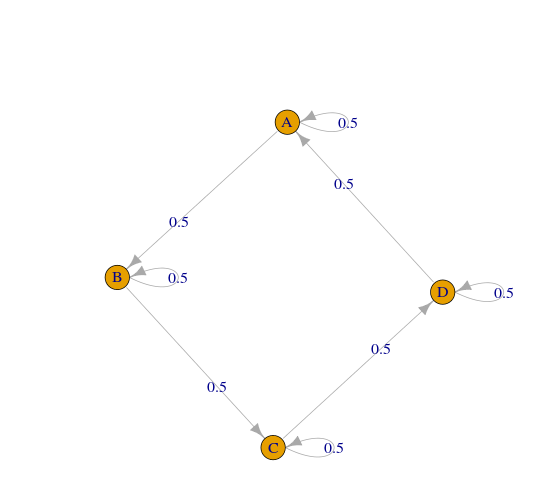 Not the answer you're looking for? Browse other questions tagged ds.dynamical-systems measure-theory ergodic-theory or ask your own question.