A classical theorem due to Dedekind states the following:

See Theorem 1 in this note by Keith Conrad for full details.

My questions are about how generalizable this theorem is. References would be highly appreciated.

2 . What is the greatest generality in which the above theorem holds? For instance, is it true when $\mathbb{Z}$ is replaced with an arbitrary Dedekind domain $R$?

[EDIT] 3. It seems that the answer to the first two questions is positive when $K$ is a finite separable extension of $F$. What happens when $K/F$ is not separable?

I have found two different references which answer both my questions in the affirmative. The first is Zariski and Samuel's 'Commutative Algebra I' (Chapter V, p. 317, Thm. 34) and the other is Neukirch's 'Algebraic Number Theory' (Chapter I, p. 47-48, Prop. 8.3). It seems that the only remaining interesting question is: What exactly happens when the field extension is not separable?

Zariski and Samuel describe a theorem of Kummer which applies to integrally closed domains (more general than Dedekind domains), but restricts to the case where the larger ring $R'$ is of the form $R[y]$, while in Dedekind's theorem, $R[y]$ might be a finite-index subgroup of $R'$. In Kummer's theorem, prime ideals are replaced with maximal ideals (in Dedekind domains, those two notions essentially coincide).

Neukirch describes a theorem which applies to Dedekind domains, and gives exactly Dedekind's Theorem when one works with rings of integers.

Kummer's theorem is the following:

I have found Neukirch's theorem here. $\mathcal{o}$ stands for a Dedekind domain, $K$ for its fraction field, $\mathcal{O}$ for the integral closure of $\mathcal{o}$ in $L$, a finite separable extension of $K$: 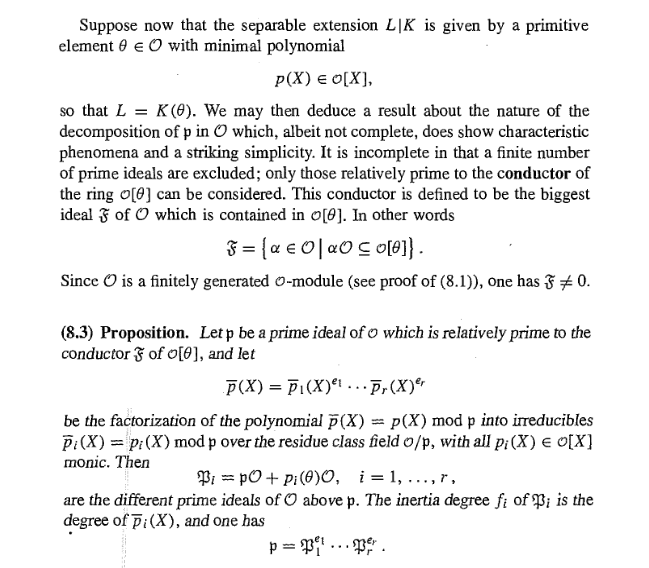 Not the answer you're looking for? Browse other questions tagged nt.number-theory reference-request ac.commutative-algebra algebraic-number-theory dedekind-domains or ask your own question.

7
Do all Dedekind domains have the “Riemann-Roch property”?
21
Two questions about finiteness of ideal classes in abstract number rings
1
The union of the totally split primes
1
A proof in Lang - Algebraic number theory
2
Decomposition and valuation rings
3
Generators of prime ideals and factorization of polynomials
Question feed