Bibliographic request concerning an article by Bernstein and Robinson

Concerning the article "Bernstein, Allen R.; Robinson, Abraham. Solution of an invariant subspace problem of K. T. Smith and P. R. Halmos. Pacific J. Math. 16 1966 421-431" I am interested in finding out the following : (1) who was the editor of the Pacific Journal of Mathematics at the time? as well as (2) who was the referee for the article? The latter is obviously the harder of the two questions but since this was nearly half a century ago perhaps such information can be made public. Are there books or articles that may shed light on either of these questions? Furthermore, (3) Since Halmos published his translation of the Bernstein-Robinson proof simultaneously in the same journal, he had to know about the upcoming publication of Bernstein-Robinson; how did he find out about it?

Note 1. I looked carefully through Dauben's biography of Robinson to see if he sheds any light on the hypothesis proposed by two respondents below that Halmos may have been a referee (among others) but Dauben doesn't shed any light on this. If anybody has information about this based on other books or personal recollections they are requested to contribute a comment or answer.

Note 2. One of the respondents below reproduced a page from Halmos' book where he claims that he first received the manuscript "early in 1966" (probably error of recollection). If that were the case, he certainly could not have been the referee since the manuscript by Bernstein and Robinson was originally submitted on 5 july 1964, and one can assume that the editor would not wait for over a year to send it out to a referee. Therefore it may be worth pointing out that Joseph Dauben documents a letter from Halmos to Robinson dated 19 june 1964 where Halmos acknowledges receipt of the manuscript. This can be found in Dauben's book on page 328, footnote 66.

Note 3. Several NSA experts have contacted me privately with educated guesses and it seems probable that the editor was Richard F. Arens and the referee Paul R. Halmos. Anyone who has additional information about this is requested to share it if possible.

Note 4. I was just informed by the editorial office of PJM that, while they are not certain, the editor for the submission was most likely Richard Arens.

I can identify one individual who scrutinized the Bernstein-Robinson manuscript and established its validity before it was published in PJM: 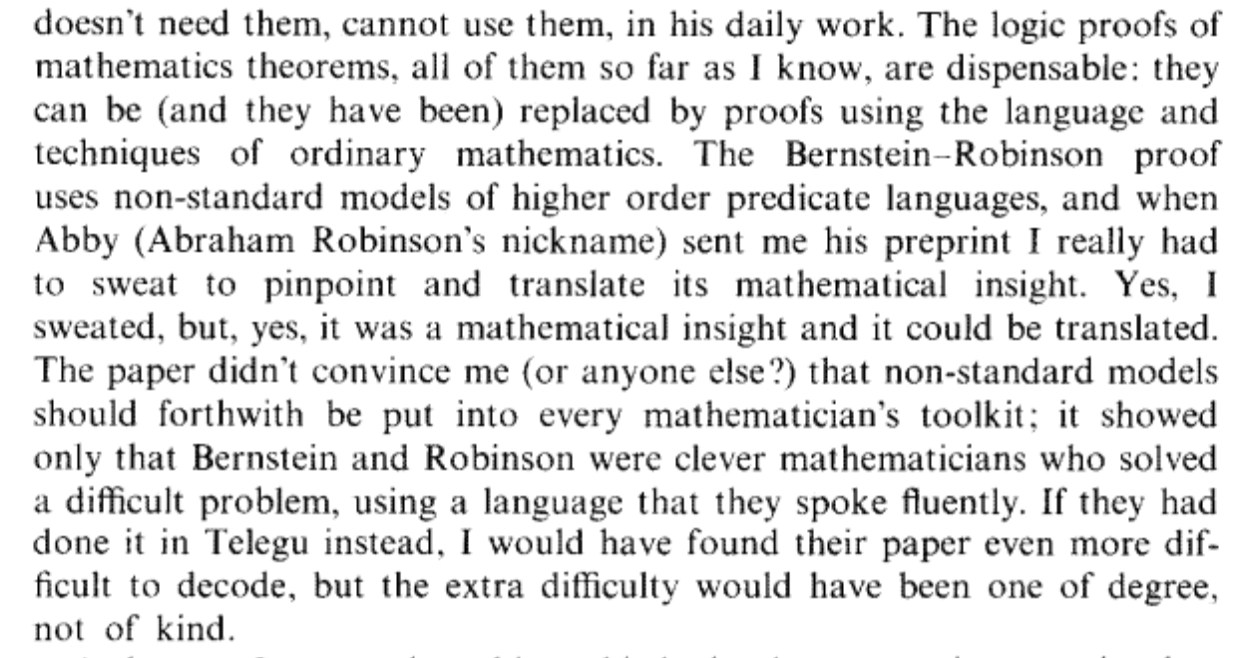 Paul Halmos, I Want to be a Mathematician: An Automathography (1985).

So even if the identity of Halmos as referee cannot be established, he at least did the work of a referee.

Actually, Halmos did more than the work of a referee, the preprint he received from Robinson motivated him to build on it and he wrote his own contribution, which was published in PJM (immediately following the Bernstein-Robinson paper). 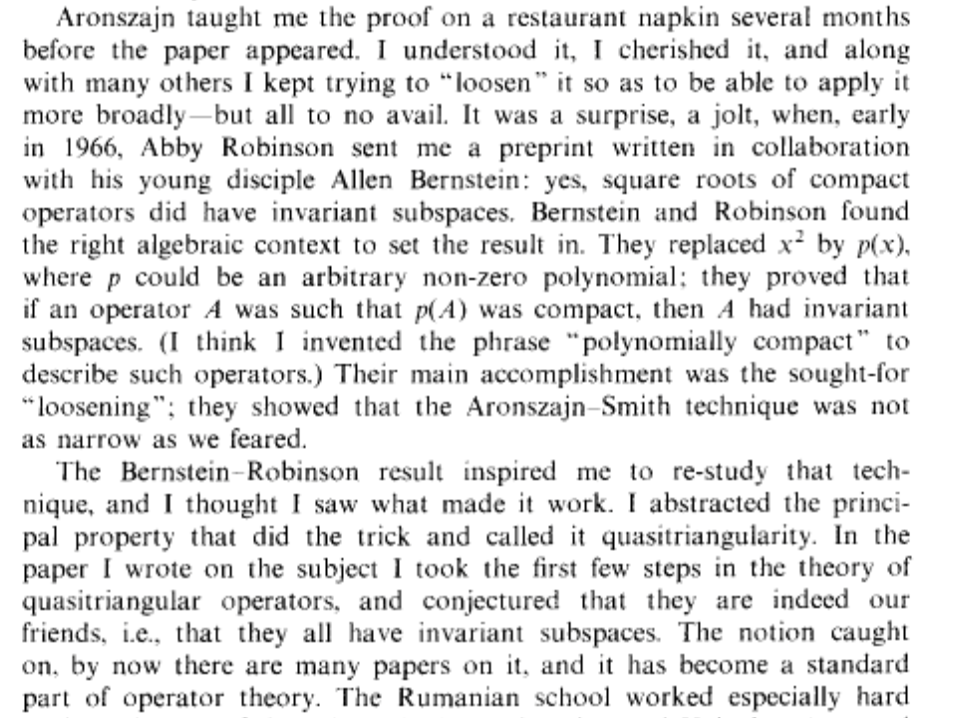 (1) From the front of that issue of the PJM

As a matter of pure speculation, a reasonable guess regarding a referee could be Smith and Halmos themselves (because they posed the conjecture) or perhaps Aronszajn because he had proved the compact case.

Not the answer you're looking for? Browse other questions tagged reference-request fa.functional-analysis soft-question operator-theory nonstandard-analysis or ask your own question.