A point set of power series with coefficients in {-1, 1}. Connected or not?

There is a related iterated function system with two functions,

$X_z$ is the unique nonempty compact fixed set of this iterated function system. It is sometimes called a generalized dragon set with parameter $z$, and particular values of $z$ can produce some well-known fractals called dragons.

A relevant result on iterated function systems is that the fixed set $X$ is connected iff it is arcwise connected iff the family of subsets $\{f_i(X)\}$ is connected, which in this case means $f_0(X_z) \cap f_1(X_z)$ is nonempty. (This paper refers to Kigami, Analysis on Fractals chapter 1 for the result.) So, the set is connected iff we can write 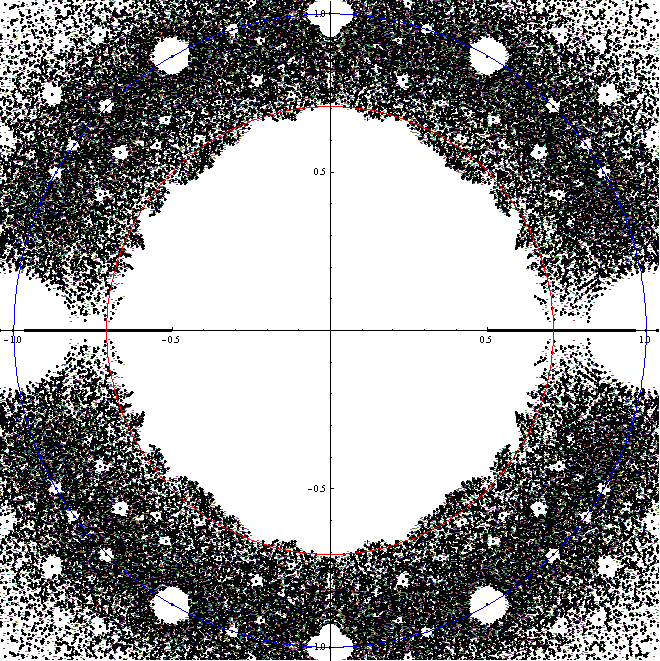 The closures of roots of polynomials with restricted coefficients have been studied, and they are quite interesting. In some areas, there seems to be a Julia-Mandelbrot correspondence, where the set of roots of small degree near a point resembles the fixed set of the iterated function at that point. This preprint of Thierry Bousch proves some connectivity properties of the closure, and that the annulus $\frac{1}{\sqrt{2}} \lt |z| \lt 1$ is in $M$. So, some of the apparent holes in the picture above close up as the degree increases, including those between the two circles such as near some roots of unity. The paper of Calegari et al mentioned by Nikita Sidorov proves that there are many actual holes in $M$, among other results.

What you are referring to is called the connectedness locus. The most recent important paper on the subject is probably this paper by Calegari, Koch and Walker.

In particular, they show that the connectedness locus contains infinitely many holes. The paper also contains an extensive list of references.

Not the answer you're looking for? Browse other questions tagged cv.complex-variables ds.dynamical-systems sequences-and-series fractals complex-dynamics or ask your own question.

4
Pseudo-alternate series
2
When may function (meromorphic) be expanded as power series with coefficients of integers
6
Analytic functions with algebraic Taylor coefficients at some point.
5
Fatou Coordinate for function with rationally indifferent fixed point, and repelling fixed point
3
Series of the inverse quadratic trinomial
3
On construction of a $\mathbb{Q}$ periodic function with Fourier series
2
A question on statistically convergent sequences
15
Infinite series with signed sums
Question feed