Self-avoiding/reflecting geodesics on a convex surface

Let $S$ be the surface of a convex body embedded in $\mathbb{R}^3$. For me $S$ is a convex polyhedron, but I am happy to view $S$ as a smooth body with positive Gaussian curvature at each point, or with non-negative Gaussian curvature at each point. Likely these various versions do not affect the question I am posing. Maybe even convexity is not required.

Let $x \in S$ be an arbitrary point on $S$, and $u$ an arbitrary direction vector tangent to $S$ at $x$. Shoot off a geodesic $\gamma$ from $x$ in direction $u$, and let it proceed until it intersects its own path at some point $y$. Rather than let the geodesic cross itself at $y$, have it instead reflect from $\gamma$ like a mirror: angle of incidence $=$ angle of reflection. And continue: every time $\gamma$ would cross itself, instead it reflects. Call this $\gamma$ a reflecting geodesic. ("Self-avoiding" is eye-catching but inaccurate.)

I would prefer not to attempt to define precisely what "most surfaces" means, but in the polyhedral world, it would suffice for $S$ to be the convex hull of random points in space. (Vertices would be hit with probability zero.) I know that, without the "generic" qualifier, a reflecting geodesic might get caught in an infinite loop. For example, on a cube, $\gamma$ intersects itself at $90^\circ$ (essentially: because of the Gauss-Bonnet theorem): 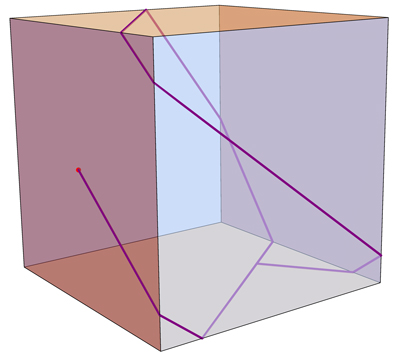 A geodesic starting at the center of the left-front face eventually intersects itself at $90^\circ$ on the bottom face. These reflecting geodesics may seem contrived, but something close to these came up in my research, and I am hoping that an answer to Q might help.
dg.differential-geometry mg.metric-geometry curves-and-surfaces polyhedra geodesics
Share
Improve this question
edited Oct 23, 2015 at 23:35
Joseph O'Rourke
asked Oct 23, 2015 at 21:34

If the set of limit points of your trajectory is not a single point it has to be a (limit set of) simple closed geodesics.

On the other hand, from Gauss--Bonnet formula, it follows that most of convex closed polyhedral surfaces do not admit simple closed geodesic.

Not the answer you're looking for? Browse other questions tagged dg.differential-geometry mg.metric-geometry curves-and-surfaces polyhedra geodesics or ask your own question.

7
Rolling a convex body: Geodesics vs. rolling curves
10
Do elongated convex objects all have long simple geodesics?
7
Shadow boundary on convex body in $\mathbb{R}^3$
21
Which convex bodies roll along closed geodesics?
6
Isometric embedding a convex cap to render its boundary planar
27
Probing a manifold with geodesics
25
Ellipses on spheres (and other surfaces)
3
How to prove a developable surface must be ruled surface?
Question feed