Initially out of idle curiosity I considered whether on a (small) circle with radius $|\varepsilon|$ around a nontrivial root (where $\zeta(\rho)=0 + î0$) is also a point with $\zeta(\rho+\varepsilon)=a + îa$ with some $a$ - with the simple background that the same condition (the real part is equal to the imaginary part) holds also on the root.

In extension of this I speculated, whether there might be even continuous lines of arguments $\rho + \varepsilon$ with increasing distance to $\rho$, all with the same ratio of the real to the imaginary part of the zeta at this points; and that those lines ("isogones" or "isogonals") should cross the root because the real and imaginary part both being zero is compatible with any proportion/ratio.

In MSE Daniel Fischer gave an initial small comment that such lines actually exist, but I'm now interested in a more intuitive and possibly more general argument for the basic idea and then for the generalizations of the subsequent observations which I've seen when I played with this problem numerically.

Assume a circle with small radius $r$ around some zero of the zeta. Let $w_\varphi$ denote some point on this circle:

Here is an image where I draw some example lines with isogonal $\zeta()$-values in steps of $\pi/16$. 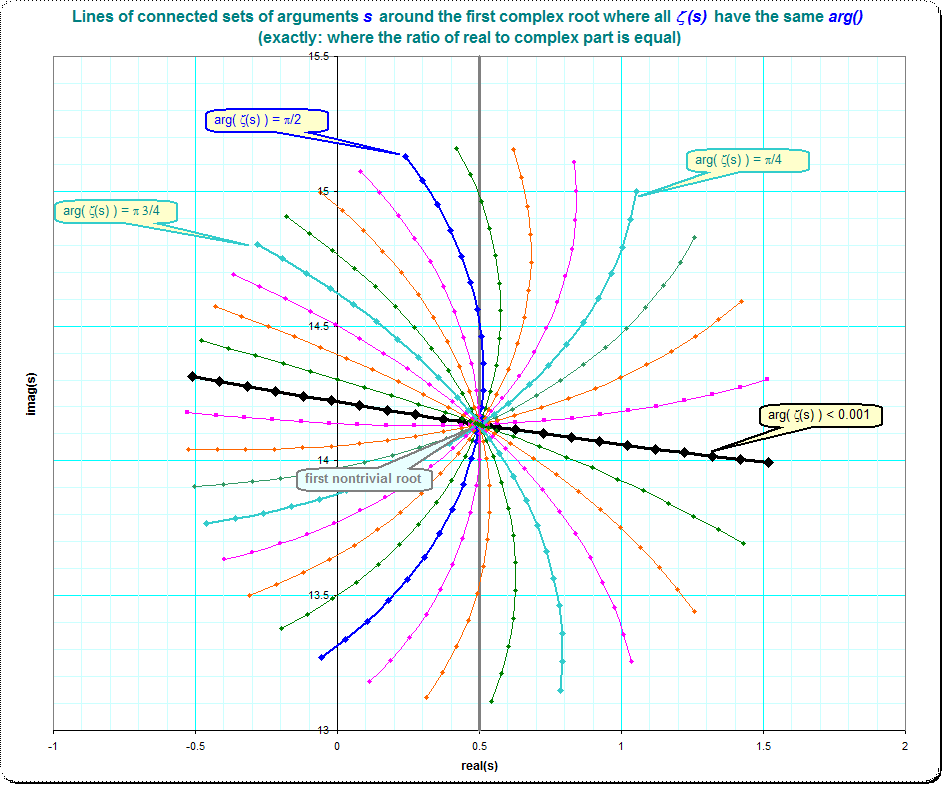 The light blue isogone with $\pi/4$ has zeta-values where real and imaginary parts are equal and illustrates the hypothetical interpolation of my initial question.
The isogone with arg$(\zeta(w))=0$ could not be drawn (didn't yet investigate the reasons, it seems the Newton-rootfinding or the iterative tracing algorithm did not nicely converge)
By the dots on the curves one can see the increase of the radius of the circles around $\rho$ in steps of $0.1$ up to $2.5$ or so. On each circle we see the full set of isogones crossing.

(I've just found, that J. Stopple has discussed the zeta with focus on the arg$(\zeta())$ aspect in some articles, and has provided a small extract of his book online with a related picture, but the contourlines for the same arg()s are not well discernible.)

The questions seem to have an interesting aspect, so I'd like to be able to formalize also the shape of the net of the lines.

Assume beyond the answer of the two above questions: that this properties of the curves are also a constitutive property of the roots of the zeta, and that this curves cannot be somehow degenerate, then it seems that the assumption of two separate roots symmetric to the critical lines would lead to contradictory sets of isogones which would cross each other requiring two different arg() of the zeta at the same argument $w$.

So it seems, that the shape of the net of isogones is critical for the question of two symmetric roots aside the critical line (and unfortunately its formal description should then be of similar difficulty as the answering of the RH itself...)

[update 2] Here is an image showing some isogones of the zeta at the first two complex roots, and symmetric around the real axis (so we see also an indication of the near of $\zeta(1)$.
The appearance of the image is somehow arbitrary, it is a contourplot using W/A with the command $\small \arg(\zeta(x+y \cdot î )^2$ where I used the squared of the complex zeta-value to get the colors of the contourplot better organized. Unfortunately I have no control to indicate the level of the contourlines (=isogones), and because it seems, W/A uses 8 levels by default I rescaled to have finally $\small \arg(\zeta(x+y \cdot î )^2)*8/\pi $ 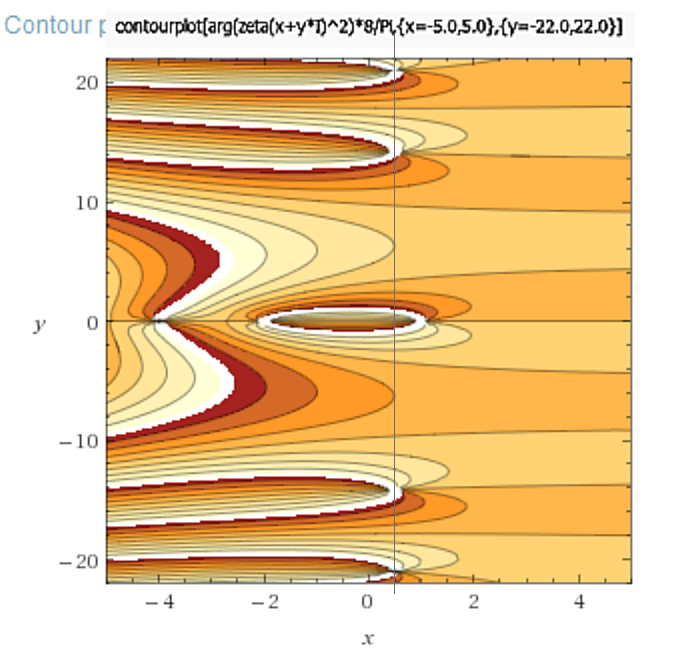 This image makes my first (odd) speculation a bit more precise: there seem always to exist isogones passing the nontrivial root and escaping to infinity at the positive real side with a continuum of neighboured isogones. If that is constitutive for any root of the zeta then I cannot imagine how two nontrivial roots symmetric about the critical line could exist without contradicting measures by the crossings of the according isogones in the area around such assumed roots.

All this is general complex analysis, so it is valid for any nonconstant holomorphic function in place of the Rieman zeta. See Rouché's theorem, the open mapping theorem, and their proofs for more detail.

Just found an interesting related paper: "the X-ray of the zeta-function" by J. Arias de Reyna of 2003 (see arxiv). He looks at the continuous lines where the zeta (in and around the critical strip) has perfect real and resp. perfect imaginary value. (This is equivalent in my notion to the isogonals with $ \arg(\zeta(s)^2)/\pi =0 $ and $\arg(\zeta(s)^2)/\pi=1 $). He displays the neighbourhood of nontrivial zeros to focus some more interesting properties and irregularities like the role of the Gram-points, and shows, that also the curves at some zeros get a shape, which I'd intuitively excluded in my question as "too degenerate" by eyeballing some of that neighbourhoods of my own sample computations and isogonal curves.

Here is one picture with a "normal" region and the third one with a region, which in my terminology were "too degenerated" as to be expected to exist at all. Thick lines have $\Im(\zeta(x+I y)) = 0$ the thin lines have $ \Re(\zeta(x + Iy)) =0$. On their crossings we have a nontrivial zero. The greyshaded area is the critical strip. 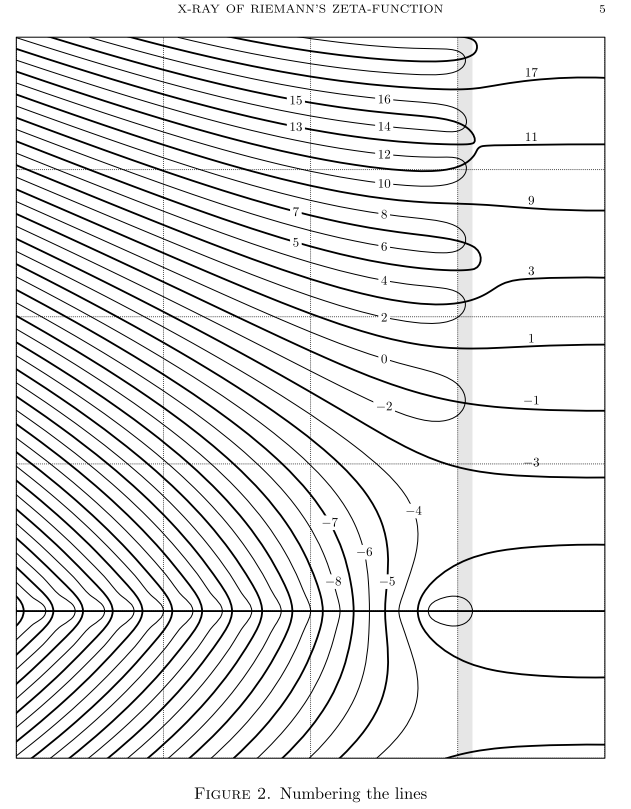 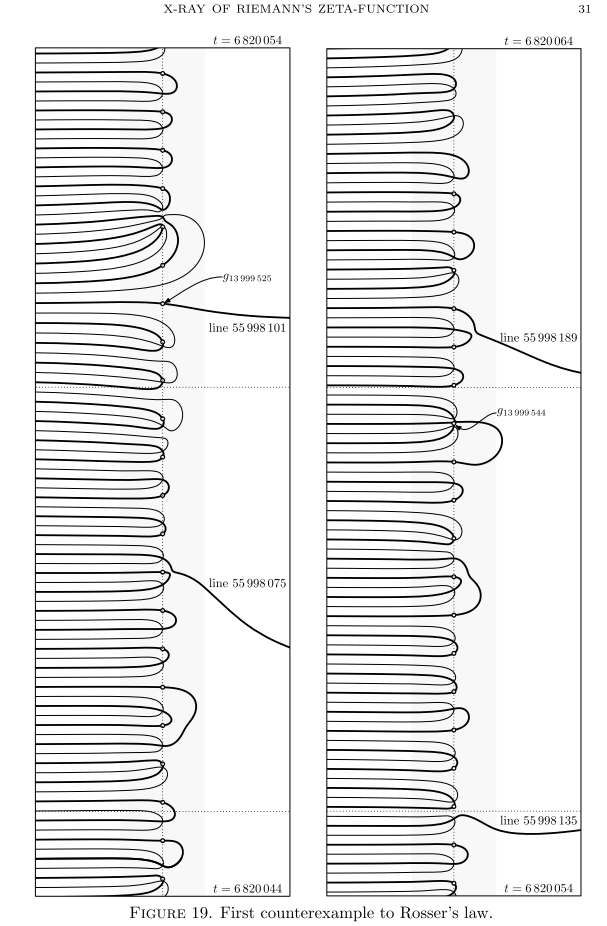 A case which I had said which is "too degenerate" to exist, because there is a case of a root where there is no isogone extending to infinity in the real halfplane because the isogones around the neighbour root enclose they completely thus prevent them to extend infinitely to the right 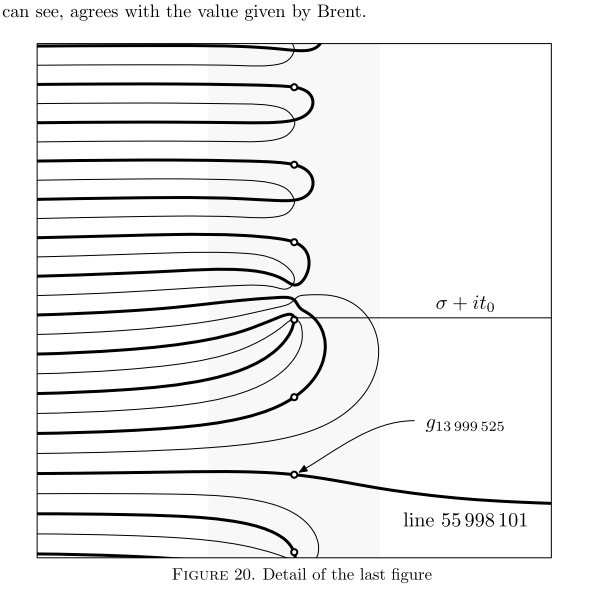 With the zeta, one can always find "special cases"...

A second paper which discusses the $\arg()$ of the zeta is by M.A. Korolev "Gram’s Law and the Argument of the Riemann Zeta Function" (also found at arXiv)

2
Upper bound for real part of Riemann Zeta function zeros
4
Do we know an upper bound for the multiplicity of the non-trivial zeros of Zeta?
24
How good is “almost all” when it comes to the Riemann Hypothesis?
0
Is the number of real values of Zeta on the critical line up to some ordinate known?
2
Show that the ratio of limits converges to the nearest Riemann zeta zero except when the ratio is a singularity
Question feed